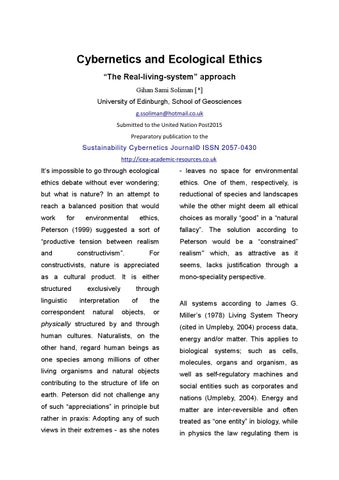 It’s impossible to go through ecological

- leaves no space for environmental

ethics debate without ever wondering;

ethics. One of them, respectively, is

but what is nature? In an attempt to

reductional of species and landscapes

reach a balanced position that would

choices as morally “good” in a “natural

fallacy”. The solution according to

Peterson would be a “constrained”

realism&quot; which, as attractive as it

seems, lacks justification through a

as a cultural product. It is either

All systems according to James G.

physically structured by and through

human cultures. Naturalists, on the

energy and/or matter. This applies to

other hand, regard human beings as

biological systems; such as cells,

one species among millions of other

molecules, organs and organism, as

well as self-regulatory machines and

contributing to the structure of life on

social entities such as corporates and

earth. Peterson did not challenge any

of such “appreciations” in principle but

matter are inter-reversible and often

rather in praxis: Adopting any of such

treated as “one entity” in biology, while

views in their extremes - as she notes

in physics the law regulating them is