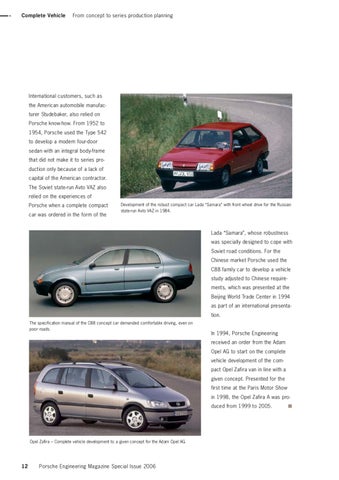 From concept to series production planning

International customers, such as the American automobile manufacturer Studebaker, also relied on Porsche know-how. From 1952 to 1954, Porsche used the Type 542 to develop a modern four-door sedan with an integral body-frame that did not make it to series production only because of a lack of capital of the American contractor. The Soviet state-run Avto VAZ also relied on the experiences of Porsche when a complete compact car was ordered in the form of the

Development of the robust compact car Lada “Samara” with front wheel drive for the Russian state-run Avto VAZ in 1984.

Lada “Samara”, whose robustness was specially designed to cope with Soviet road conditions. For the Chinese market Porsche used the C88 family car to develop a vehicle study adjusted to Chinese requirements, which was presented at the Beijing World Trade Center in 1994 as part of an international presentation. The specification manual of the C88 concept car demanded comfortable driving, even on poor roads.

In 1994, Porsche Engineering received an order from the Adam Opel AG to start on the complete vehicle development of the compact Opel Zafira van in line with a given concept. Presented for the first time at the Paris Motor Show in 1998, the Opel Zafira A was produced from 1999 to 2005.

Opel Zafira – Complete vehicle development to a given concept for the Adam Opel AG. 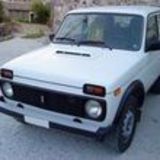