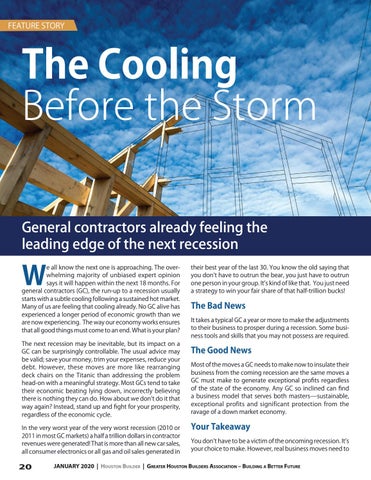 e all know the next one is approaching. The overwhelming majority of unbiased expert opinion says it will happen within the next 18 months. For general contractors (GC), the run-up to a recession usually starts with a subtle cooling following a sustained hot market. Many of us are feeling that cooling already. No GC alive has experienced a longer period of economic growth than we are now experiencing. The way our economy works ensures that all good things must come to an end. What is your plan? The next recession may be inevitable, but its impact on a GC can be surprisingly controllable. The usual advice may be valid; save your money, trim your expenses, reduce your debt. However, these moves are more like rearranging deck chairs on the Titanic than addressing the problem head-on with a meaningful strategy. Most GCs tend to take their economic beating lying down, incorrectly believing there is nothing they can do. How about we don’t do it that way again? Instead, stand up and fight for your prosperity, regardless of the economic cycle. In the very worst year of the very worst recession (2010 or 2011 in most GC markets) a half a trillion dollars in contractor revenues were generated! That is more than all new car sales, all consumer electronics or all gas and oil sales generated in

their best year of the last 30. You know the old saying that you don’t have to outrun the bear, you just have to outrun one person in your group. It's kind of like that. You just need a strategy to win your fair share of that half-trillion bucks!

The Bad News It takes a typical GC a year or more to make the adjustments to their business to prosper during a recession. Some business tools and skills that you may not possess are required.

The Good News Most of the moves a GC needs to make now to insulate their business from the coming recession are the same moves a GC must make to generate exceptional profits regardless of the state of the economy. Any GC so inclined can find a business model that serves both masters—sustainable, exceptional profits and significant protection from the ravage of a down market economy.

Your Takeaway You don’t have to be a victim of the oncoming recession. It’s your choice to make. However, real business moves need to 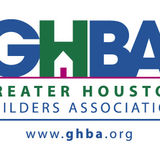