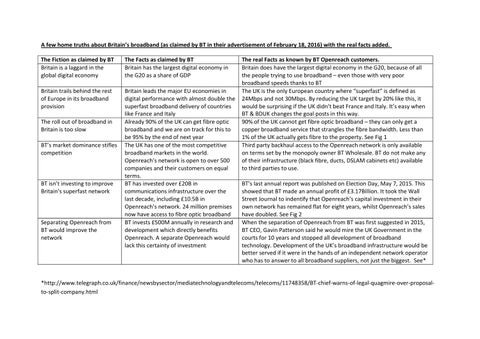 A few home truths about Britain’s broadband (as claimed by BT in their advertisement of February 18, 2016) with the real facts added. The Fiction as claimed by BT Britain is a laggard in the global digital economy

Britain trails behind the rest of Europe in its broadband provision

Britain leads the major EU economies in digital performance with almost double the superfast broadband delivery of countries like France and Italy Already 90% of the UK can get fibre optic broadband and we are on track for this to be 95% by the end of next year The UK has one of the most competitive broadband markets in the world. Openreach’s network is open to over 500 companies and their customers on equal terms. BT has invested over £20B in communications infrastructure over the last decade, including £10.5B in Openreach’s network. 24 million premises now have access to fibre optic broadband BT invests £500M annually in research and development which directly benefits Openreach. A separate Openreach would lack this certainty of investment

Separating Openreach from BT would improve the network

The real Facts as known by BT Openreach customers. Britain does have the largest digital economy in the G20, because of all the people trying to use broadband – even those with very poor broadband speeds thanks to BT The UK is the only European country where “superfast” is defined as 24Mbps and not 30Mbps. By reducing the UK target by 20% like this, it would be surprising if the UK didn’t beat France and Italy. It’s easy when BT & BDUK changes the goal posts in this way. 90% of the UK cannot get fibre optic broadband – they can only get a copper broadband service that strangles the fibre bandwidth. Less than 1% of the UK actually gets fibre to the property. See Fig 1 Third party backhaul access to the Openreach network is only available on terms set by the monopoly owner BT Wholesale. BT do not make any of their infrastructure (black fibre, ducts, DSLAM cabinets etc) available to third parties to use. BT’s last annual report was published on Election Day, May 7, 2015. This showed that BT made an annual profit of £3.17Billion. It took the Wall Street Journal to indentify that Openreach’s capital investment in their own network has remained flat for eight years, whilst Openreach’s sales have doubled. See Fig 2 When the separation of Openreach from BT was first suggested in 2015, BT CEO, Gavin Patterson said he would mire the UK Government in the courts for 10 years and stopped all development of broadband technology. Development of the UK’s broadband infrastructure would be better served if it were in the hands of an independent network operator who has to answer to all broadband suppliers, not just the biggest. See*