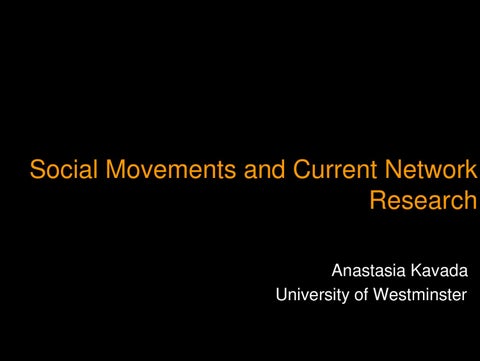 Explain how the notion of networks is involved in it

The anti-globalization movement &amp; the internet Characteristics: l global in its scope and nature l ideologically diverse l organized in a flexible and non-hierarchical way Role of the Internet: l considered as an internet-based movement l the internet affects all of the above characteristics

The anti-globalisation movement &amp; the network metaphor The network concept is by far the most common metaphor used to explain the movement l

Organizing: organized as a network of networks

of a paradigm than a predictive social theory

use of mathematics and graph theory

Movements are defined as: â&amp;#x20AC;&amp;#x153;a network of informal interactions between a plurality of individuals, groups and/or organizations, engaged in a political or cultural conflict, on the basis of a shared collective identityâ&amp;#x20AC;? (Diani)

Limitations: l Structural Determinism l Lack of dialogue with other social theorists because of abstruse terminology and methods

RAND Corporation “the network form of organization is on the rise, deeply affecting all realms of society” (Arquilla and Ronfeldt 1996) Characteristics: l Purpose: social equity and accountability l Demand for communication èNetworks have a larger impact on civil society actors Levels of analysis of netwar actors: 1. 2. 3. 4. 5.

with “how actors and organisations mobilise,

Structure is treated as a verb and not a noun, as a fluid process and not as an easily determinable outcome

of the rhizome â&amp;#x20AC;&amp;#x153;a subterranean plant growth process involving propagation through the horizontal development of the plant stemâ&amp;#x20AC;? (Cleaver 1999) lMeshworks

do not exist in pure form but in degrees

Principles of Self-Organization: More is different’ l ‘Ignorance is useful’ l Random encounters should be encouraged l ‘Look for patterns in the signs’ l ‘Local information can lead to global wisdom’ l‘

Anti-essentialist view: power, role or character are understood in relational terms Ideology and structure are understood as dynamic and fluid processes Conceptualization of micro and macro

studying their relationships and interactions with other organizations within the movement

micro – the actor: èlevels of analysis of netwar actors proposed by RAND l The relationships and interactions with other actors: èthe principles of self-organization l The event organized (different points in time) l Methods l Web 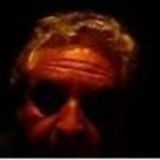