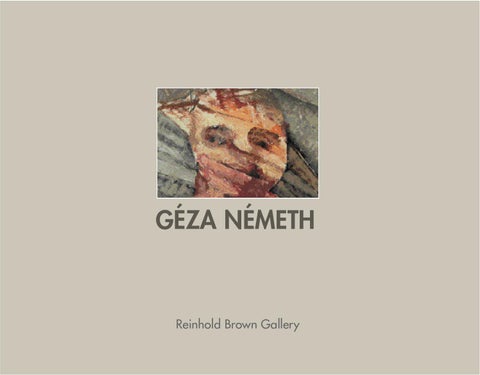 Geza Nemeth: Prophecies in Time The relationship of the prophetic artist to his social milieu is troubled at best. Taken with vatic truth, in which the beauty of a statement is made fierce by a moral, and often political, stance, the engaged poet and painter look to create a New Jerusalem, in which technical achievement and ethical stature combine to create a new way of seeing. It would appear inevitable that so visionary an approach would chafe under the restrictions of convention, which marries opportunity to a comfortable perception of life. When a new form is genuinely invented, or even if an inherited form is mastered, there is a corresponding perception that the artist has attained a new level of depth, in both his work and his person. Such profundity has little to do with the daily commerce of the time; an inexorable opposition occurs with the newness of what has been achieved in art and the need for certainty, that is to say continuity, in the commercial transactions of everyday life. As a result, while it has become a truism, even to the point of cliché, to say the modes of vision and business are inherently contradictory, the statement nonetheless etches in deep relief the oppositional notions of what is imagined and what is apparently real. At least this is what the situation seems to be. The warmth of the spiritual, never a great friend of the cold realities of cash, demands an ahistoricalæI mean by that an essentially timelessærelation to the imagination, which we know, from Plato on, is not a faculty to be trusted. Whatever is true in the timeless intensity of the moment cannot be easily stretched to accommodate the different kind of certainty requisite in the split-second machinations of the global market. Now that capital has, for all intents and purposes, taken over the world, the sense of the prophetic seems more vulnerable than ever; painting and poetry, the arts most given over to the resolutely imagined, find the space they inhabit increasingly small, to the point where survival becomes the primary activity of their practitioners. It is of little surprise, then, that today’s artists, in the anxiety of their position, cling to the truths of earlier prophetic artists. They, as much as anyone, need certainty, albeit of a different sort than the kind underlying daily life; they need to know that moral achievement in art is not so different from what are traditionally the attributes most remarked upon in language and image: the skilled use of color and form. The point to be made here is that any attainment of skill carries with it an ethical dimension, made brilliant and clear by the way words and images carry weight, no matter the intention of the artist. Geza Nemeth is an artist whose works may be seen in this light of moral, even prophetic, accomplishment. Nemeth has always been a man of rational achievement as well as imagination: he studied mathematics in addition to art. Perhaps because of his mathematical training, Nemeth is a painter whose mind has looked to abstract and absolute structures of experience, in addition to his response to the ephemeral. There is a gravity to his invention, which communicates not only the prophetic in a close to biblical sense, but also the notion that the oracular must exist, no matter how strenuous its exhortation, within the particulars of its time. He has pursued his conscience, showing off his obvious, and elective, affinity for matters of artistic consequence, most especially the deep-seated human drive for dignity and metaphysical awareness. Throughout his career, even in the figurative paintings of his youth, there is a gravitas, a prophetic depth and weight, that echoes beyond the configurations of his composition. Yet, like any and all artists, his imagination must be acknowledged as residing within the details of his society and period. Part of the dignity we sense in Nemeth’s art is his willingness, indeed his sense of duty, to offer an alternativeæa means toward spiritual independence. This is deeply important, for the artist must attract to himself a method of living, a way of seeing that will result in self-worth and the ability to communicate serious concepts to as large an audience as possible. Part of the struggle concerns maintaining one’s independence, no matter what the consequences in the political climate of the time. So it happens Nemeth’s pursuit of art has a sense of independence that suggests not only the prophet’s incandescent voice but also the reality of that voice in actual time. His richly tonal emotional range is evident in recent paintings such as Magus (2002), Adam (2002), and Dancing Angel (2002), in which the figures appear to be hewn from the rough certainties of stone. The figure of the magus, defined as a magician, sorcerer, or astrologer, appears to be wearing a beard; his head, cut in relief out from the stone behind him, is composed of the same gray-brown material. The gaze and mien of the dancing angel, with blunt wings extended, offer the viewer a pose of high seriousness, the figure emerging into life from a rocky background. And the figure of Adam, the father of us all, is shown with a prophet’s beard and with his eyes closed, his head emerging from the rock just behind him. Each of these figures are resolute actors of high purpose; each of them are intended to bring to the viewer a moral point of view.

A large part of the seriousness of these figures results from their air of tragic recognition, expressed as grimness, in which the dignity they have achieved appears to be as deep as it has been hard won. In Stage (2002) and Clown (2002), for example, the figures appear as darkly wry personages, whose melancholic meaning palpably quivers in an atmosphere of adamantine restraint. In Stage, it happens that the actor-figure looks as though he has been covered with a mask of cloth; his features are rendered by slashes: a cross for the eyes and nose, a horizontal for the mouth. The suggestion is one of tragic destiny, in which the actions of a person are quite literally masked from the audience, so that a true sense of that person remains mysteriously distant, even as we directly consider the figure. In Clown, a sad-eyed person with a wistful grin extends his arms outward, into the gray hardness of stone; his arms themselves turn into gray stone as they pass outward, away from his body. The mournful expression of the clown accentuates the audience’s awareness of the fact, noted in the figure’s half smile, that mortality hovers over all of our interactions in the world; we do the best we can in the limited time we have. Stage and Clown, like Nemeth’s other paintings, remind us of our limited stay on earth, and in so doing, remark upon the possibility of an unspoken, if melancholy, worth. Suddenly everything we do possesses weight and meaning, in large part because we know we are not meant to be active forever, in the midst of our often frenzied circumstances. Nemeth makes this awareness even more clear in a moving series of eight portraits of the Buddha (2001), in different stages of concentration and holiness. He begins with Prince: The First Step, continues through to Poet: The Fourth Step, and ends with Cosmic: The Eighth Step. In this suite of works, it becomes clear that Nemeth is a painter of religious truths, which speak prophetically to the human condition. Yet we would do well to remember that the Buddha is a figure who has attained supreme rationality as well as spiritual insight; there is no difference between the clarity of the world and the clarity of his thought. What Nemeth has done, more than anything else, is to place this figure within august circumstances, as a way of emphasizing his achievement; his portraits in the pictorial sequence appear to have been hewn from stone. Again and again we find in Nemeth’s paintings a spiritual kinship, the recognition of a hierarchy that is not always identifiable in life but which nonetheless exists, often invisible but always real. The speech and imagery that do greatest justice to these truths are prophetic by nature, insofar as they are the only means available to us for spiritual recognition. Even the choice of a personage like the Buddha proves Nemeth is a painter who resolutely pursues a harder courseæsomeone who is taken with the portrayal not only of the appearance of truth, but the hard, often harsh, actuality of its existence in time. There is, at times, a grimness in his art that comments on the cost of prophetic mind. Why the terms of prophecy should be so difficult is hard to determine. They are best understood as they areæas the dictates of the real, the virtues of what is understood but not always expressed. In a moving painting from 2002 entitled Contemplation, a bird, perhaps a seagull, sits on a square stone in the sand, at the edge of rippling water. The bird is both a symbol of meditative mind and an actual living thingæthat is, the creature is emblematic and real at the same moment in time. It speaks to the stillness, the ontological void, out of which all speech, all prophecy develops; the bird is caught in a moment of motionlessness, contrary to its actual nature in flight. It is an example of a symbol that is quite real; as prophecy it is alive to its moment in time. We now know that our efforts at articulating a reality based on the absolute are almost irrevocably clumsy, our awkwardness becoming a comment on the humanness of our endeavor even as we try to transcend our humanity. Nemeth is a painter whose intention is to render invisible truths as authentic and real as a landscape, as a bird come to a stop by the edge of the sea. The gravity of his aim makes him an independent artist, someone for whom the purpose of painting continues to be humanist not only in its implications but also in its expression. This is an approach that is not greatly popular in these days of digital imagery and conceptual structure; however, it has the advantage of being timeless, in the prophetic sense of that word. Nemeth finds the strength to portray the human in its greatest dignity, in a moment when religious significance keys into visual depth. In this way, he offers not only memorable imagery but also an emotional core, intended to assuage people’s search for meaningfulness during their limited time on earth. —Jonathan Goodman Jonathan Goodman is a poet and art writer who has written for such magazines as Art in America, Sculpture, and Art on Paper. He currently teaches at Pratt Institute in New York City 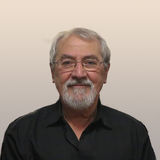