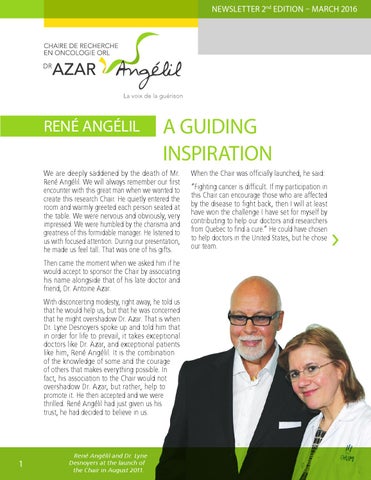 We are deeply saddened by the death of Mr. René Angélil. We will always remember our first encounter with this great man when we wanted to create this research Chair. He quietly entered the room and warmly greeted each person seated at the table. We were nervous and obviously, very impressed. We were humbled by the charisma and greatness of this formidable manager. He listened to us with focused attention. During our presentation, he made us feel tall. That was one of his gifts. Then came the moment when we asked him if he would accept to sponsor the Chair by associating his name alongside that of his late doctor and friend, Dr. Antoine Azar. With disconcerting modesty, right away, he told us that he would help us, but that he was concerned that he might overshadow Dr. Azar. That is when Dr. Lyne Desnoyers spoke up and told him that in order for life to prevail, it takes exceptional doctors like Dr. Azar, and exceptional patients like him, René Angélil. It is the combination of the knowledge of some and the courage of others that makes everything possible. In fact, his association to the Chair would not overshadow Dr. Azar, but rather, help to promote it. He then accepted and we were thrilled. René Angélil had just given us his trust, he had decided to believe in us.

René Angélil and Dr. Lyne Desnoyers at the launch of the Chair in August 2011.

When the Chair was officially launched, he said: “Fighting cancer is difficult. If my participation in this Chair can encourage those who are affected by the disease to fight back, then I will at least have won the challenge I have set for myself by contributing to help our doctors and researchers from Quebec to find a cure.” He could have chosen to help doctors in the United States, but he chose our team.