Gerard Taylor is the founder of Gerard Taylor Design and the Creative Director of Orangebox. Gerard Taylor heads his own design consultancy which is based in central London and works in the fields of furniture, product design, interior architecture and in the creating of strategic brand value. The studios portfolio of work spans three decades, for both private clients and internationally renowned brands. For the last fifteen years Gerard Taylor has worked as the Creative Director of Orangebox, his vision and strategic direction contributing to the company’s rapid growth. Orangebox is now recognised as one of Europe’s most progressive, innovative and successful office furniture companies. Taylor studied product design at the Glasgow School of Art and industrial design at the Royal College of Art, London. After receiving his Masters degree from the RCA he was hired by the highly influential Italian designer Ettore Sottsass, and during his time in the designers Milan office worked with renowned brands including Knoll, Artemide, Fiorucci, Espirit and Phillips. During the same period Taylor was invited to participate with Memphis, the international design collective that dominated the international design scene in the 1980s, helping establish Italy’s reputation as a centre of design excellence. Taylor’s pieces for Memphis remain highly coveted, with many held in museum and private collections (such as the extensive art and design collection built up by David Bowie, and sold by Sotheby’s London in 2017). On Taylor’s return to London he established a design studio with Daniel Wiel. The pair went on to work with high profile companies including Esprit (for whom they designed stores throughout Australia), French Connection, Channel 4, BBC, Artemide, Anthologie Quartet and Alessi. In 1991, after Weil left to become Professor of Industrial Design at the RCA (later becoming a partner at Pentagram), Taylor set up his own award-winning creative consultancy, Gerard Taylor Design. The consultancy’s work has included the design of retail stores for Habitat (including flagship stores in Croydon, Glasgow and Hamburg), and interior design projects for Selfridges’ London and Manchester, and City Inn Hotels. It has also undertaken major office furniture projects for the likes of Knoll, Steelcase, Bernhardt, Sony and the Skandinavisk group. Taylor has collaborated with Irish designer Orla Kiely on the global development of her eponymous brand, with retail projects in London, New York, Hong Kong and throughout the Far East. He also continues to design residential projects, mainly in London. Taylor researches and writes on the contemporary workplace, speaks regularly at conferences around the globe on the dynamics of the changing workplace. In spring 2018 Taylor’s latest research was published by Orangebox as a book, That’s not a stick, that’s a log! 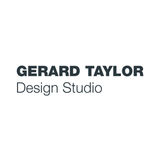