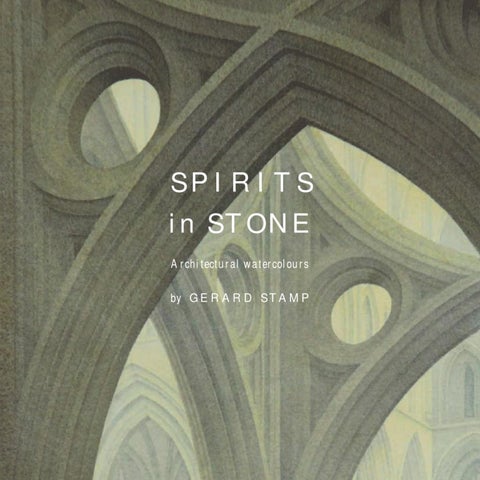 I was lucky enough to be born and bred in York. From a very young age, I was taken to York Minster on a regular basis and it made an indelible impression on me. Whatever the weather, the moment you enter the doors you are in a place of serenity and calm and extreme beauty. This is the effect that Gerard Stampâ&#x20AC;&#x2122;s pictures had on me the first time I saw them. The great vaulted ceilings, the cool naves, and the soaring architecture which he captures so magnificently. The very English view across a ploughed field to a misty I N T R O D U C T I O N by J udi De nc h

church in the distance epitomises for me all that I have learned to love about English cathedrals and architecture. Not only does he evoke the beauty of these buildings, but Gerard manages to instil them with age and atmosphere. At the same time, there is a sense of timelessness about his paintings and you feel drawn into them, as if you could walk through the frame straight into the church or cathedral. The peace and tranquillity is overwhelming and I could sit and look at them for hours. I envy anyone coming across these paintings for the first time. They take your breath away.

“ PAINTING IS BUT ANOTHER WORD FOR FEELING”

WHY “SPIRITS IN STONE”?

nay, even of approval or condemnation, which we feel in walls that have long been washed

I am often asked why I paint churches. It’s a

by the passing waves of humanity ... it is in

question which has no easy answer. I have

that golden stain of time, that we are to look

for the real light, and colour, and preciousness

mediæval architecture – for as long as I

remember. I admire the great houses and

The idea that a structure made out of

castles handed down to us, but I have never

brick and stone can somehow impart

had quite the same passion to paint them. I

‘approval’ or ‘condemnation’ may be to the

modern cynic at best unduly romantic and at

worst utterly ridiculous. But it is this

What I try to express is the atmosphere,

anthropomorphism which gives spirit to these

the feeling of a place. I am attracted by the

places and draws me to them. You cannot feel

melancholy, the timelessness, the tranquillity

the ‘passing waves of humanity” more

of a simple country church or the solemn ruins

strongly than in a church.

of a once great abbey. Those are qualities

We are living in an angry and uncertain

that can also be found in the bleakest of

world. In a time of great change these ancient

buildings provide constancy for the soul. We

the Norfolk coast. These are hardly new or

also live in a crowded world where (apart from

‘original’ subjects for an artist’s attention -

some wonderful exceptions) I see around us

quite the opposite - but that is no reason not

ugliness and banality in urban planning, and

to interpret them anew, and with fresh eyes.

look in despair at the seeping industrialisation

But there is something else. John Ruskin wrote: “The greatest glory of a building is not

of our rural landscape and seascape. These buildings serve as sanctuaries

in its stones, nor in its gold. Its glory is in its

for the eyes: I paint them because they are

age, and in that deep sense of voicefulness, of

A CORNER OF THE LADY CHAPEL, ELY

BASE OF ST PETER MANCROFT TOWER

THROUGH TO THE NAVE, ELY

Gerard Stamp lives and works in Norfolk. He went to school under the shadow of Norwich Cathedral, where he developed a passion for drawing and painting. After gaining a BA (1st) at Art College he pursued a career in London’s Design and Advertising industry before focusing full time on painting in 2002. In 2005 he held his first solo show, at the Grapevine Gallery, Norwich. 2006 saw his first London exhibition, in Cork Street. Six more solo exhibitions followed, including Marshscape, a series of G E R A R D S T A M P bor n 22 Marc h 1955

large studies featuring the Norfolk coast. In 2009 Gerard held an exhibition at Bonhams, New Bond Street, London. Entitled Twelve Churches, it celebrated The Churches Conservation Trust’s 40th Anniversary. In 2010 his life came full circle. At Norwich Cathedral he staged the inaugural exhibition for the Royal opening of the ‘Hostry’, a new Exhibition and Visitor Centre and one of the largest Cathedral developments since the rebuilding of Coventry. Gerard was delighted to be asked to present Her Majesty the Queen with a painting to celebrate the occasion.

makes, the more he suggests monumentality and infinity. What he loves most is the atmosphere evoked by the beautiful illusion of timelessness.” Ian Collins

“Gerard has, while toiling alone in Norfolk, blossomed, come of age as an artist of skill, power and originality.” Dan Cruickshank

Astonishing... his watercolour church architecture is a kind of miracle in itself.” Ronald Blythe

“His paintings show a fascination with the effect of light constantly moving across weathered brick and stone... Architectural poetry in watercolour.” Mary Miers

“The more delicate the marks this artist

“Stamp turns architecture into art. He converts stone and brick, light and shadow, the tilt of a roof and the line of a wall into a living, exhilarating picture.” Simon Jenkins