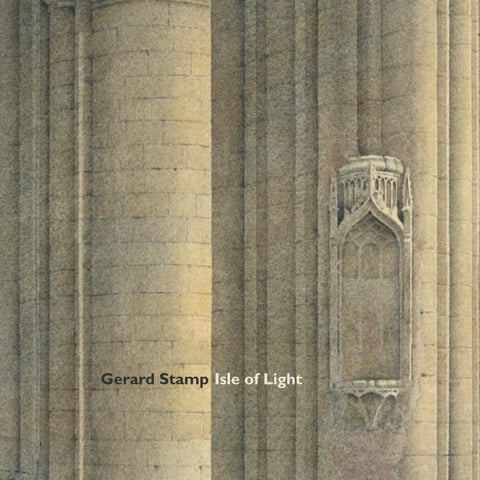 Isle of Light Watercolours of Ely Cathedral by Gerard Stamp

Decorated — and surely the coldest building in

of our great cathedrals. I have never forgotten

all England — with its vast windows and the

my first sight of it, in mid-winter almost half a

century ago. It then seemed incomprehensible,

remnants of the most

as the train rattled north of Cambridge across

On many subsequent visits I learned more

the endless, dreary fens, that a great building

about the troubled history of the cathedral,

should be so remote. And then there it was,

about the large chunks of it that fell down

high on its island, seen across the then snow-

(a not-uncommon Mediæval experience) so

allowing the genius of Alan of Walsingham (if

asset in the heart of the town. It was the

it was he) to see how the collapsed crossing

skyline that was so extraordinary: the most

tower could be replaced by the vast octagonal

space. It is a cathedral showing the best of

and then, much further along its long, bleak

every phase of the Mediæval: Norman, E.E.,

Dec., and then Perp. represented by those

weird shape of the Octagon lantern. And then

And I began to see how much the cathedral

owed to the Victorians at their best, above all

ly opening out into the breathtaking open high

to the great, much maligned Gilbert Scott (who

space under that lantern, one of the greatest

leaps of the imagination in all architectural

who fell to his death from scaffolding inside

history. And then the further delights, above

the west tower because he had his hands in his

all the spacious, semi-detached Lady Chapel,

pockets: be warned). It was Scott who so

that most elegant masterpiece of Flowing

brilliantly restored the Octagon, gave us the

timber screen in front of the wonderful old

its monumental, complicated and often gaunt

choir stalls, a splendid reredos, and some of his

magnificent metalwork. And, thinking of

metal, I have always loved those magnificent

All this Gerard has caught so well in his

which still do their best to keep the cold at bay.

I am both flattered by and diffident about

As for Ely itself, the miserable small grey

my little brother asking me to write this

town huddled at the foot of the great

introduction to the catalogue of his latest

Cathedral, it seemed to me back then to give a

exhibition. Although our lives have taken very

convincing impression of what the Middle

different routes, we have much in common

when it comes to what we admire in architec-

ture and painting. But there are seven years

expanding too fast and too much – so threaten-

between us, and that makes a difference

ing to spoil the precious distant views of the

(trying to think of other comparable siblings,

Cathedral. But there is still that glorious

unfortunately I came up with the Martins –

prospect of the irregular pile of grey stone

also seven years apart and, like us, cursed with

rising up, with its skyline of strange pinnacles

confusion by having the same initial for our

(one puzzlingly missing), seen to advantage

from the train window when travelling even

the architecturally sublime, and his bonkers

further north into the Fens. And the building

itself is as powerful, as challenging, as

magnificent as ever, hardly spoiled by liturgical

experiment and trendy interventions – with

and cathedrals in France which started him

off, but I remember different holidays with

better. And it is now so very satisfactory that

our parents, and my own enthusiasms were

our separate but compatible architectural

really fired by being at school in South

London while his formative experience was

glorious, incomparably strange and yet so

in Norwich: hence the love of East Anglian

ecclesiology which is so conspicuous in

for a romantic painter who understands and

responds so creatively to great and venerable

As I say, Gerard’s life and mine have gone

in very different directions. The first working part of his was alien to me, but what I so

admired was that, when he could, he gave up

Architectural historian and writer, whose recent

books include ‘Gothic for the Steam Age; an

to Norfolk – and not just to enjoy sybaritic

leisure but to devote himself to something

and ‘The Memorial to the Missing of the Somme’.

really serious: painting. Even more admirable was the way he took this new (or revived) vocation so seriously, working hard and closely studying the best models, above all, the watercolours and etchings by that Norwich genius, John Sell Cotman. All this shows so happily in Gerard’s own work which, I have to say as a

bemused big brother, one that merely writes these days rather than makes, gets better and

Out of bounds to troops Norfolkâ&#x20AC;&#x2122;s forbidden churches

strange and yet so beautiful Ely Cathedral” the

visited by the public, STANTA is somewhere I

following paintings are of rather more humble

always yearned to explore, partly because of the

churches not very far distant which are lucky to

lure of something ‘forbidden’ but also because

have survived at all.

In July 1942 the inhabitants of six Norfolk

was granted special access to create a series of

villages near Thetford were summoned to

paintings for an exhibition in Norwich,

meetings and told they would be evacuated.

They had just three weeks to move out: the

I was there two days in all, one of them

battle training leading up to the D-Day

entirely on my own. The experience was

invasion. Although rehoused, the villagers were

unforgettable: poignant, utterly quiet (this was

never allowed to return, and the army has used

during a break in military exercises!) and with a

the land for active training ever since.

melancholic beauty normally experienced in a

Nearly all the village buildings have long gone, but Stanford Training Area (STANTA)

ruin (although in its way, this is a ruin of a whole community on a vast scale).

There has been another unexpected and

with its typical East Anglian round tower, 15th

STANTA since 1942 has remained a largely

(substantially enlarged in the 1850’s by Pugin),

and little Norman Langford. Each has its own

wonderfully rich in flora and fauna. It is now

one of the largest Sites of Special Scientific

back (just) from ruin behind chain link fencing

timelessness about his work which draws us in.

first as an acquaintance, then a friend. For the

But above all is the light. Light playing and

last 11 years I have had the privilege of not

glancing off stone and glass, leading us on, and

only showing his work but talking with him on

round and up. We all see it, many of us try

an almost daily basis about his hopes and,

and capture it through our cameras and

at times, fears. He is, self-evidently, a

phones, but this man can do it through that

perfectionist. Sharing, as we seem to, the

most challenging of media, watercolour. And

on a monumental scale.

Over the years, I have watched and

In those last 11 years I have also probably

listened, and yet to me – more familiar with

his work than many – it remains a mystery and

peers, to knights of the realm, to art critics, to

a wondrous mystery. Yes, his technique is

the famous and the not so famous – about his

painstaking and his skill consummate but it is

work than anybody other than him. Because of

that ineffable and inexplicable ability to turn

the subject matter I am often asked whether he

the intangible into the tangible that is

is an architect or particularly religious. In fact

he is neither, but what he does have and what

to have become conditioned to this – to no

is so easily understood and appreciated is a

longer be surprised – but this is not the case.

unique ability to capture that sense of peace,

With each painting, I still experience that

tranquillity, time passing – have it what you

thrill first felt some 12 years ago when he

will – that we all, religious or not, recognise

and feel in our churches and cathedrals.

miraculous, the same thrill that others tell

As Judi Dench put it, there is a sense of

me they feel when they first see his work.

With each exhibition I wonder whether he can

his first solo show, at the Grapevine Gallery,

continue to satisfy himself as well as his

Norwich. The next year saw his first London

audience, and on each occasion, from York

Minster to St. Pauls, to Norwich and Exeter,

and now to a shared love, Ely, our mutual

including Marshscape, a series of large studies

doubts have proved without foundation.

featuring the Norfolk coast, and Mediæval , a

This latest collection is, to my eye, remarka-

celebration of church architecture. In 2010,

Gerard was invited to stage the inaugural

Anyone who looks up at the Octagon or

exhibition for the Royal opening of the Hostry,

catches a distant glimpse of the Cathedral

a new Exhibition and Visitor Centre at

rising out of the fenland mists knows they are

Norwich Cathedral where he was delighted to

in the presence of something awe-inspiring and

be asked to present Her Majesty the Queen

with a painting to celebrate the occasion.

– quite how I still don’t

know – Gerard has captured this.

Subsequent exhibitions including Spirits in Stone with Grapevine in London, Conquest at

Norwich Castle Art Gallery and At the Still

Norfolk. He went to school under the shadow

of Norwich Cathedral, where he developed

his reputation as one of the country’s finest

and Advertising industry before focusing full

Founder and owner of Grapevine Contemporary

Stamp turns architecture into art. He converts stone and brick, light and shadow, the tilt of a roof and the line of a wall into a living, exhilarating picture. Simon Jenkins

Gerard has, while toiling alone in Norfolk, blossomed, come of age as an artist of skill, power and originality. Dan Cruickshank

Astonishing... his watercolour church architecture is a kind of miracle in itself. Ronald Blythe

His paintings show a fascination with the effect of light constantly moving across weathered brick and stone... Architectural poetry in watercolour. Mary Miers

The peace and tranquillity is overwhelming and I could sit and look at them for hours. Judi Dench

Isle of Light Watercolours of Ely Cathedral by Gerard Stamp

The more delicate the marks this artist makes, the more he suggests monumentality and infinity. What he loves most is the atmosphere evoked by the beautiful illusion of timelessness. 'Isle of light' by Gerard Stamp

'Isle of light' by Gerard Stamp