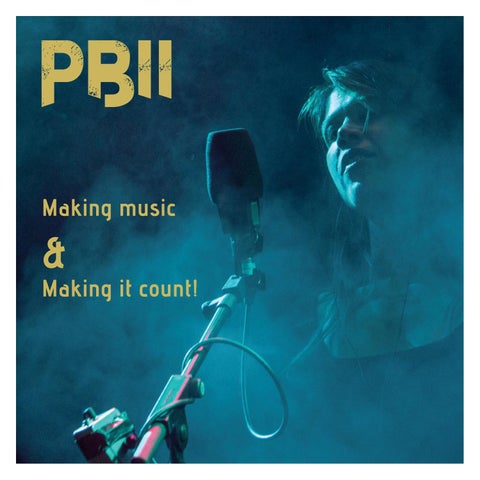 Music is our life And life deserves more attention We do both:

‘making music, and making it count!’

vision Music is the best there is! That goes for nearly every person. In whatever form or genre. Music connects, makes you happy, creates atmosphere, energises. And music has a message! We, PBII, have been doing that all our lives. And all that life experience... is exactly what youâ&#x20AC;&#x2122;ll hear in our music.

Why We are born musicians and we were raised on stage.

The years have enriched us. Enrichment, not only through making music on stage, but also through life experience. Gradually we came to the conclusion: The things that really matter are not measured by success,

but rather by what you give back to life.

drive Using music as a means of working on the future. For us that speaks for itself. But we went further and made it our mission!

Life is not intended to pay back, but to pay forward.

The band plunges into the gigantic and life-threatening plastic waste in our oceans. With the support of none other than Charles Moore. 2013:

With the rock-opera 1000Wishes PBII teams up with KiKa in the fight against child cancer. In collaboration with Frits Lambrechts and accompanied by the Hofstad Jeugdorkest. 2016:

Chasing the dreams of Wubbo Ockels! In collaboration with Stichting Happy Energy and the Plastic Soup Foundation.

oceans. Through weathering, sunlight and wave action the plastic breaks down into increasingly smaller pieces. This leads to severe pollution. The oceans cover 72% of the earthâ&#x20AC;&#x2122;s surface and are the main suppliers of oxygen.

The ocean is the main source of nourishment for more than half the worldâ&#x20AC;&#x2122;s population.

about 500 to 550 under-eighteens are diagnosed with cancer every year. Cancer in children can’t be compared to cancer in adults. The type of cancer is different. A child’s body reacts very differently from that of an adult. Both treatment and the chances for recovery vary greatly.

Annually 800 children are treated in hospitals for cancer. Three out of four children with cancer are successfully treated! There are over 20 types of child cancer. Of these Leukaemia is the most common. In 2016 the best care, the best research and the best doctors have joined the Princess Máxima Center, the largest child cancer centre in Europe.

ROC K E T Celebrating the dreams of Wubbo Ockels Wubbo Ockels, the first Dutchman in space! The time he spent in space made a lasting impression on Ockels, especially Earth in all its vulnerability. This changed Wubbo. Unfortunately his ambitious and important second career was ended by his untimely death.

We are moved by this ... and get into action.

Humanity has to stop destroying the earth. Someone has to make the first move. Why not us with our band? Our aim is to support mankind and thus the Earth and everything living on it. Thatâ&#x20AC;&#x2122;s what were doing now in his name ... but in our way:

Roc k e t At the end of his life Wubbo gave a ‘final speech’ from his deathbed in which he urged people to fight as hard for the earth as his wife did for him during his year-long illness.

Moved and motivated by his words, the men of PBII wrote twelve songs in which they look at the Earth from a distance, just as Wubbo once did. They see the problems and dream about a solution. These twelve songs are the basis of a performance that goes even further. In Rocket! they want to imprint the need to deal with the Earth in a new way for the public. Also by providing hope in showing what is already being done and delivering tools to do something by oneself. That ranges from new ways of dealing with plastic and energy to supporting projects that enable us to do more with less. At the end of the show the ‘Plastic Footprint’ downloads. A mobile app that helps to monitor your ‘green behaviour’ permanently.

partners PBII collaborates actively with local, regional and national media companies. Local media are proud that our act is coming to their town. As a result they are closely involved, generate special attention and organise special activities. National media are able to follow the complete tour or highlights from the tour. They can also create documentaries or special features as well as promote performances in a number of programs and on social media.

PBII Personally I hope people will remember us as the band that addresses a range of social topics, such as the Plastic Soup, Sustainability and Child cancer, through a multi media music bonanza. Having people go home with a gut feeling of: Wow! what a show, but also Wow!! they sure have a point and fuck, I can do something about it myself ...

Influencing the way people think. By doing something you enjoy in a concrete and meaningful way.

Arnold Schwarzenegger has had a many-sided career partly due to his sheer will power. He’s an inspiration showing the world that you can achieve great things if you really want to. After countless sporting prizes, his acting and his political career he now devotes himself to improve the well-being of everyone. That’s the way I want to do it!

Alex van Elswijk Having started playing the accordion at the age of eight, my strict father made me practice one hour every day. Through my father, to whom I am still very grateful, I’m engaged in my greatest passion in life which is making music.

Michel van Wassem I’m so proud we’re doing this! Developing our own music and building a network of people to perform our music as well as doing something meaningful!

What drives me in life is the child in me that lets me admire the world through the eyes of a child, a world that sometimes also puzzles me. While the world gives me beauty, music gives me air, without which I wouldn’t be able to survive.

First and foremost we want to move people with our music.

We want to be a rock band that makes people think. We try to make people curious about the situation of the world today and hope they become interested when they listen to our music and immerse themselves in our texts.

Making music. And making it count. 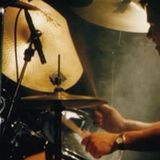