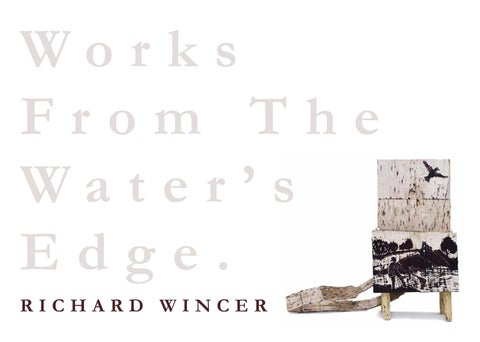 With special thanks to Matthew Houlding at Studio 2 for making this exhibition possible.

Richard Wincer is an unusual artist these days. He is

attention. It was raw and odd and powerful – the kind of

someone who not only believes in the power of art to

work which may have made some people uncomfortable

transfigure the everyday world but requires his work to

but which was not easy to forget.

do it. I first encountered his work in the mid-eighties, more than a decade after he had left Goldsmith’s, which

Stepping inside his Hut on the terrace of the Hayward

was just beginning to acquire its reputation as a hot

house for the avant-garde. Wincer was never going to be

off from the twentieth century.

part of that set but nevertheless his work was noticed

a preternatural world, seemingly dredged from the

by several influential members of the art world. In 1980

beginning of time. In the centre stood a pedestal bearing a

he was included in the Summer Show at the Serpentine

Tree of Life, that ancient symbol of the interconnectness

Gallery, chosen by Tony Carter, which at that time was

of all things living. Unlike many representations which

an important showcase for young artists emerging on the

show a gnarled old tree, his tree seemed young. It was

scene. A few years later he was included in The Sculpture

simple and straight with only a few branches with serried

Show at the Hayward at a time when young British

rows of pointed leaves. It was a little like a candelabra,

Sculpture was very much in the news. Much of the work

or at least had a ceremonial feel about it. Around the

walls were painted isolated naked figures standing in a

as prefiguring what came to be known as postmodern

desert landscape, while beneath them shadowy fish swam

irony. The fact that Wincer’s work was so unlike anything

in their parallel world of water.

wore a similar jacket of leaves but, rather charmingly, an

and used what many would consider to be a monotonous

way of earning a living as a springboard to create some astonishing figures. The Three Shiners are clad in

The original title of the oak leaf jacket was The Englishness

overalls. They have block-like feet and brandish creased

of English Art, which makes clear how the artist places

lumps, which are more like rocks that cleaning cloths.

himself within the tradition of English art, which is

Each face is different but the features are all primitive

rooted in a response to the natural world. The glory

and impassive and each is surrounded by a decorative

circlet depicting the sun, the moon and the stars. Part

strength and endurance. It had a special place in Greek

buffoonery of Alfred Jarry, without the viciousness.

mythology: deemed sacred to Zeus, the priests at his oracle would seek to divine the godâ&amp;#x20AC;&amp;#x2122;s pronouncements

Included in the same show was a work which is arguably

by listening to the rustling of the leaves. It does not

the most spectacular thing he has made. The Gold Oak

seem fanciful to see these golden leaves as also having a

Leaf Jacket is what it says it is: a jacket made of oak

magical quality. This jacket is unlike anything else I have

leaves which have been dipped in resin and then painted

seen made by a contemporary artist. It is a triumphant

a soft gold. It would belong to a man larger than normal

but it has been hung on a wire hanger and then encased in a dark wooden box. The effect is at once medieval and

When he left London and moved to Hebden Bridge, he

fiercely modern. In the version of Hut, which he showed

realised that it was the countryside that was most likely

at the Garden festival at Stoke on Trent, a glittering figure

to allow him access to the kind of spiritual truthfulness 6

which he found imperative. He found a way of tapping

crescendo of Tidal Wave which becomes a world of its

into that deep resource of

own, peopled by huge fish and a small church.

throughout his life, starting when he was a child exploring the countryside in Worcestershire.

He has always loved fishing and will go off for the day whenever he can. He likes the solitariness of it; there is

As an artist, Richard produces paintings and woodcuts

alongside his work as a sculptor. Water recurs in the

doing. In an earlier piece of sculpture, he carved a large

paintings and is seen as a powerful and at times potentially

fishing net with a hooked fish, twisting wildly within it.

destructive force. He makes us aware of the sense of life

At the top stands the fisherman, who is the same size as

within it and the varying strength of its flow. Woodcuts

the fish. They are joined mouth to mouth, so that the

are a well-established genre in the British Romantic

line becomes a kind of umbilical cord. This piece seems

tradition and it is one that suits his talents very well.

to encapsulate the strength to be gained from looking at

his work; it enhances our awareness of the state of being

is his most natural medium. The painstaking process of

alive. This is what art can do for us and we should make

carving the image onto the surface of the wood, before

the most of it.

inking up, seems curiously well suited to conveying the emotional impact of his imagination. A single fish makes

its way through the water, the grain of the wood vividly

suggesting the shadows of the surrounding depths. Most memorable is the way in which the natural circles which show the growth of a tree have been used to create the 7

They have the feel of a drawing as well as a sculpture, a

with Works From The Water’s Edge, an exhibition of

painting as well as a garment. They are everyday magic

and yet finely-tuned, playful and also deeply felt. They

someone’s home while they’re out, with remnants of

are wholesome, authentic and altogether delightful.

their inner and their outer life dotted around, or else visiting a small museum in a remote outpost and stepping

Visit them if you can.

in out of the cold. It was like arriving at an intersection between worlds, where everything is both subtle and

dense at the same time. The tang of wood was seeping

through the air and the sculptures offered a sturdy company, yet I seemed to be enveloped by a much less tangible presence. Somehow elusive glimpses of memory are carved and captured in these objects, which are like characters in a timeless story. They seem to hum their creaky song, tell their splintered stories, release their grainy memories and reveal their knotty dreams. They are at one and the same time homely and exotic, delicate and robust, naive and sophisticated, light and weighty. 9

The works included in the exhibition at Studio 2 were

blocks produced for woodcut to be interesting objects

in their own right.

In the summer of

The techniques used in woodcut

involve cutting the image into a wooden surface. This

scenes for a project called Fulcrum. IOU is a company

is comparable to carving and sculpting. It occurred to

with an international reputation for producing live

me that that the disciplines of painting, sculpture and

printmaking could be combined into one object. This

resulted in me making some ‘sculpted paintings’ and I

I constructed scenes from wooden panels, which I then

included the stretcher bars in the finished work. Thinking

carved and stained to produce these dioramas of small

Man was the first of these and then quickly followed by

town life with its surrounding countryside. As I created

these scenes, I began to have ideas for new sculptures and woodcarvings and I made brief preparatory pencil

The full-sized Jacket was constructed using a sewing-

sketches. At this time my studio was only really large

pattern and then individual pieces of beech wood

enough for me to produce paintings, so I soon took the

were carved to fit the pattern pieces. These were then

opportunity to move to a larger space where these initial

painstakingly sewn together to make the final garment.

sketches could be developed. I quickly began working to

It involved many months of work, which I could never

make these sculptures a reality.

rush. This slow process of construction proved to be common to all the objects.

As a printmaker, I have always found the wooden

determined its own pace and I began to get accustomed 11

to a new way of working. Rural landscape, particularly scenes near water and fishing are a recurring theme in my work, which stem from my childhood experiences in rural Worcestershire and from my involvement with wild places as a fisherman. Sculptures such as Key to the Sea, Creel and Fishing Tackle are all examples of these influences. I see the artist as a fisherman raising images and work from the watery depths of the unconscious. I have always felt the two activities to be related to each other. In creativity we are confronted with contemplation of the depths and what lies beneath the surface. Works From The Waterâ&amp;#x20AC;&amp;#x2122;s Edge is a collection of objects that are all interrelated and influenced by each other. The works seemed to flow from one to another easily as I created them. It felt natural and right. I have the feeling that I have waded into a new river of creativity and things are flowing freely. Richard Wincer Artist 12