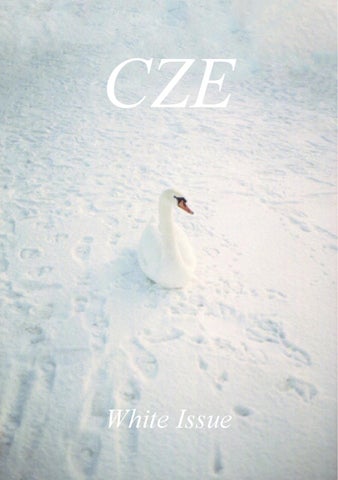 CZE is a photography magazine that features itâ&amp;#x20AC;&amp;#x2122;s favorite works from all around the earth

7th issue of CZE Magazine is not about a particular color, White can be associated with various emotions and feelings, starting from calm and light, finishing with hysterical and chaotic.

Submit your works for the 8th â&amp;#x20AC; (Religious) issue at: cze.mag@gmail.com Or join our

out their WHITE photos

Johnny De Guzman “Working off of a well known cliché and subjectivity. Rather than appreciating that the glass is two halves full do we over-dramatize the spilt milk? We need to realize there’s no use crying over the small things.”

Geneviève Bjargardóttir “Taken last summer, flying from San Francisco back to Reykjavík. There was a haze hanging over the hills, everything was glowing pink and blue in the evening sun. We did not see any darkness at all on that flight, and not for many weeks afterwards either.”

Jordan Small “Some friends and I went to a lecture about Jack Kerouac and Carl Sandburg. The lecturer told us we should go to Carl Sandburg’s home before we die, so we went the next day. They still maintain the goat farm there so after we toured the house, we played with the goats and i took this photo.”

Joshua Anderson “The photo was taken in my bedroom. It’s part of a project called Dissociation. Dissociation is a partial or complete disruption of the normal integration of a person’s conscious or psychological functioning. It can be a response to trauma or drugs and allows the mind to distance itself from experiences that are too much for the psyche to process at that time. All of the photos in there series are people or places that were part of a period of trauma for me, that being most of 2010. Now that things have gone back to normal for the most part, I have been reexamining those people or places. This particular image is where the light would come in my window early in the morning, hit the mirror, and reflect onto my bed. I would see the sunrise in the mirror all the time because I couldn’t sleep.”

Charlie Engman “This was taken at a party in a friend’s summer home in the middle of nowhere, Wisconsin. It was mostly a party of childhood friends, but for some reason this girl showed up, a friend of a friend I guess, and sort of just wafted through the party, periodically making bizarre comments and dancing romantically with herself in the middle of the room. I took this photo around 3am; she was microwaving milk.”

Rumano II Power “I took this photo this March, when I traveled to Helsinki to visit my girlfriend. This photo was took from the ferry wich goes to an island called Suomelina, just at 20 minutes from the center of Helsinki. Although it seems a snowed field but it´s just the frozen sea and another island. I was amazed of such a place so I froze it too with my Rolleiflex.”

Kuba Ryniewicz “This photograph was taken in 1998 in my hometown Puszczykowo, Poland. One day I woke up and everything was pure white, there was nothing else but white material. On that time together with my friends were sort of goth-punk thinking and looking- I thought photograph this would perfectly contrast us to the enviroment. Also it was the time that I started my adventures with photography, so that’s why this photo is pretty lo-fi.”

Ian Stanton A ghost bike or ghostcycle is a bicycle set up as a roadside memorial in a place where a cyclist has been killed or severely injured.

Renaldy Fernando Kusuma â&amp;#x20AC;&amp;#x153;I did that in bandung, west Java.When the sun is so bright and feels so good to take photos the clouds shaped beautifully and I mixed it with the flowers around. both attracted me to take a shootâ&amp;#x20AC;?

George Nebieridze is the c feel free to co geo_nebieridze

creator of CZE magazine, ontact him at: e@yahoo.com

or supporting me by sending their give me permission of featuring their magazine. 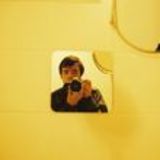