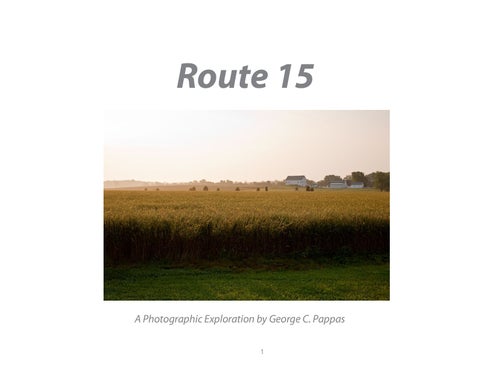 This book is dedicated to my sweetheart, Coleen.

runs along the Catoctin Mountain Range from Virginia through Maryland, Pennsylvania, and beyond. It crosses through a region that is a contrast between the old and the new, the rural and the suburban, and the North and the South. I have driven Route 15 many times over the last 25 years and always enjoyed the sheer beauty of the Catoctin Mountain Range and the valleys that can be seen from the highway. The worldwide Sofobomo book project was an ideal excuse for me to spend some time exploring this region. This book is my effort to caputre a better sense of the people, cutlure, and beauty that make up this area. Frederick County is close to Washington D. C. and Baltimore. As a result of the areaâ&amp;#x20AC;&amp;#x2122;s economic growth, there is continuing encroachment from new development and a struggle to accomodate the change it creates. Many Civil War battles and events took place on this terrain. Evidence of this 140 year-old conflict remains today beyond the boundaries of the areaâ&amp;#x20AC;&amp;#x2122;s national parks and landmarks. The people I met throughout this project were friendly and helpful. More than once, someone would offer suggestions or directions when my maps did not provide quite enough information or point out something I needed to see that was not well documented. My website has a gallery devoted to this project and my blog documents this project and my ongoing work in photography. My gallery can be found at www.georgepappas.net My Route 15 Blog can be found at sofobomo-route15.blogspot.com I can be reached at george@pappasonline.net Thank you for reviewing my work. George C. Pappas, June 2009

Frederick County - The Heart of Route 15 in Maryland 5

When driving North on Route 15 from Washington D.C., Leesburg gives way to Lucketts, which leads to the Potomac River at Point-of-Rocks, Maryland. The bridge, also call Point-of-Rocks, crosses the Potomac into Marylandâ&amp;#x20AC;&amp;#x2122;s Frederick County. The Cheasepeake and Ohio Canal runs along the Potomac from Washington D.C. up into Ohio. It was built during the 19th century and was a transportation gateway; today, it is a national park. Brunswick, a lovely town, sits northwest of Route 15 along the Potomac River.

On a weekday morning, lines of cars slowly make their way across the bridge from Maryland into Virginia towards their work in the Northern Virginia area. There is a historic MARC train station at Point-of-Rocks. In the morning, it is a portal to another world for those who must commute. After rush hour, it sits like a lonely transporter only to return commuters to their families and towns once again at the end of the day.

Henry Culler I was driving by Henry’s Garage in Brunswick and saw his racing pickup truck peeking out of the open door. Henry was just finishing his Saturday lawn mowing as I approached him. We struck up a conversation and he proceeded to tell me that he had purchased his 1940 Willy over 25 years ago and had painstakingly restored it over several years with the help of many friends. The disks you see on the truck’s windshield are certificates of races he has finished. Taped to the refrigerator in his garage were old racing schedules, notices, and a picture or two. He races it every chance he gets. He told me “there isn’t money in this, you do it for other reasons.” We had a great talk and I went on my way. You have see the vehicle in all of its glory; it is quite a sight.

Roy C. Stream Roy lives on his family’s farm in Leesburg. His garden is large enough that he donates food to the needy and provides fresh vegetables for several of his neighbors. The farm has been in Roy’s family for several generations. He told me that, except for two nights, he has slept in his house every night of his entire life. There is no reason for him to not be home. Loudoun County had been among the fastest growing counties in the country for the last ten years. Roy told me that in the 1950’s there were over 256 dairy farms in the county. Today there is one.

Adamstown, Emmitsburg, Flint Hill, Libertytown, Tuscarora These towns stretch from Emmitsburg, just south of the Pennsylvania border to Tuscarora on the Virginia border. Emmitsburg is the location of the national shrine of Elizabeth Ann Seton, the first American-born Saint of the Roman Catholic Church. Adamstown is located along the lands of Carrolton Manor. It was named in 1840 after a settler, Adam Kohlenberg, came there to live. Flint Hill is located next to Sugarloaf Mountain Park and is full of gently curving hills and meandering roads. Tuscarora is on the southern tip of Fredrick County. It lies along the Potomac River.

Frederick, Smithsburg, Thurmont Frederick is the center of the county and its largest city. It is home to many Civil War landmarks that tell its story. Fort Detrick, located nereby, is home to the US Army Medical Research and Materiel Command. Smithsburg is located in northeast Washington County. It is nestled just to the west of Camp David. Thurmont is considered the gateway to the Catoctin mountains. It is 258 years old and was originally named Mechanicsburg until the state legislature renamed it in 1894. The name â&amp;#x20AC;&amp;#x153;Thurmontâ&amp;#x20AC;? is half-German and half-French.

Tyrone Snowdin Tyrone has a remarkable voice. He sings gospel music with a belief and passion that is clear to all who listen. I had the pleasure of hearing Tyrone during the Thrumont Art Festival held on the townâ&amp;#x20AC;&amp;#x2122;s newly refurbished canal trail. Tyrone kept the crowd transfixed as he sang one melody after another. When he ended his performance, everyone sat speechless.

Glenn Fishack Glenn is President of the Washington County Volunteer Fire &amp; Rescue Association based in Hagerstown. As a life-long resident, He is an expert on Smithsburg and its history. He and his wife were very gracious and gave me a wealth of information.

David Buckwheat David loves children. That is why he enjoys working the carnival rides so much. He gets to see their delight. While we were talking, a boy came to David’s ride. Because there was no line, he gave the young boy a private ride for a long as he wanted. “I love seeing the looks on their faces”, he told me. Being a carnival roady is hard work. The team has to break down the rides and buildings when the carnival ends at 11pm and be on the road to its next destination early the next day.

Abe Williams I met Mr. Williams at the Smithsburg Volunteer Fire Department Carnival. He was manning the raffle booth where five bucks gets you a chance at a gas barbecue (I havenâ&amp;#x20AC;&amp;#x2122;t received my call yet telling me I can come pick it up). Abe was the founder of the original EMS service in Smithsburg. He is an honored leader in the community - his booth mate told me of his lengthy service to the town and its people. We had a nice chat and he watched my cameras while I hit the striker with a big hammer for $2.00 and won a prize for my daughter. I returned home with two inflatable bats for my trouble.

Photographic Notes I have been a photographer for over 30 years. For most of that time, I worked predominately in black &amp; white using film in a chemical darkroom. The digital imaging revolution made it easy to see with an entire new color palette that has extended the way I photograph. While I still use film cameras, this project was done entirely using Canon 5D and Leica M8 digital cameras. The image quality produced by these cameras is superb yet they are very compact and operate very quickly. The Canon was used for most of the landscape photographs. I use the Leica for people photography; its unobtrusive nature prevents the camera from â&amp;#x20AC;&amp;#x153;getting in the wayâ&amp;#x20AC;? and helps keep subjects at ease.