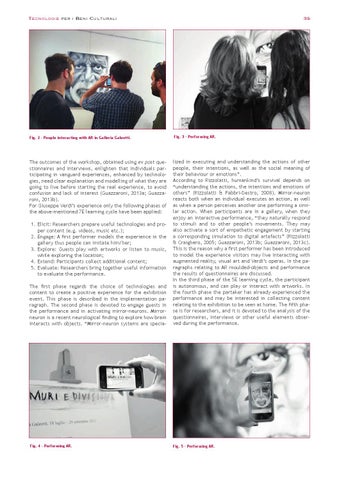 Tecnologie per i Beni Culturali

The outcomes of the workshop, obtained using ex post questionnaires and interviews, enlighten that individuals participating in vanguard experiences, enhanced by technologies, need clear explanation and modelling of what they are going to live before starting the real experience, to avoid confusion and lack of interest (Guazzaroni, 2013a; Guazzaroni, 2013b). For Giuseppe Verdi’s experience only the following phases of the above-mentioned 7E learning cycle have been applied:

The first phase regards the choice of technologies and content to create a positive experience for the exhibition event. This phase is described in the implementation paragraph. The second phase is devoted to engage guests in the performance and in activating mirror-neurons. Mirrorneuron is a recent neurological finding to explore how brain interacts with objects. “Mirror-neuron systems are specia-

lized in executing and understanding the actions of other people, their intentions, as well as the social meaning of their behaviour or emotions”. According to Rizzolatti, humankind’s survival depends on “understanding the actions, the intentions and emotions of others” (Rizzolatti &amp; Fabbri-Destro, 2008). Mirror-neuron reacts both when an individual executes an action, as well as when a person perceives another one performing a similar action. When participants are in a gallery, when they enjoy an interactive performance, “they naturally respond to stimuli and to other people’s movements. They may also activate a sort of empathetic engagement by starting a corresponding simulation to digital artefacts” (Rizzolatti &amp; Craighero, 2005; Guazzaroni, 2013b; Guazzaroni, 2013c). This is the reason why a first performer has been introduced to model the experience visitors may live interacting with augmented reality, visual art and Verdi’s operas. In the paragraphs relating to AR moulded-objects and performance the results of questionnaires are discussed. In the third phase of the 5E learning cycle, the participant is autonomous, and can play or interact with artworks. In the fourth phase the partaker has already experienced the performance and may be interested in collecting content relating to the exhibition to be seen at home. The fifth phase is for researchers, and it is devoted to the analysis of the questionnaires, interviews or other useful elements observed during the performance.

Archeomatica - Tecnologie per i Beni Culturali 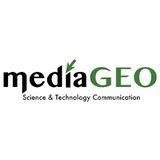