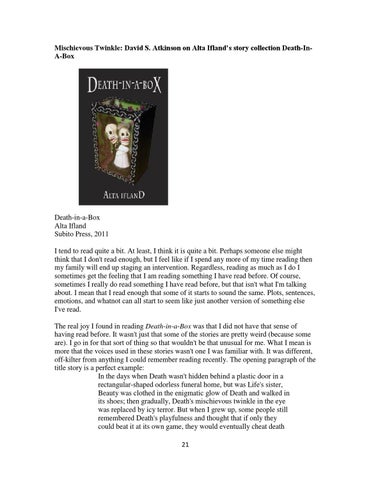 Death-in-a-Box Alta Ifland Subito Press, 2011 I tend to read quite a bit. At least, I think it is quite a bit. Perhaps someone else might think that I don&#39;t read enough, but I feel like if I spend any more of my time reading then my family will end up staging an intervention. Regardless, reading as much as I do I sometimes get the feeling that I am reading something I have read before. Of course, sometimes I really do read something I have read before, but that isn&#39;t what I&#39;m talking about. I mean that I read enough that some of it starts to sound the same. Plots, sentences, emotions, and whatnot can all start to seem like just another version of something else I&#39;ve read. The real joy I found in reading Death-in-a-Box was that I did not have that sense of having read before. It wasn&#39;t just that some of the stories are pretty weird (because some are). I go in for that sort of thing so that wouldn&#39;t be that unusual for me. What I mean is more that the voices used in these stories wasn&#39;t one I was familiar with. It was different, off-kilter from anything I could remember reading recently. The opening paragraph of the title story is a perfect example: In the days when Death wasn&#39;t hidden behind a plastic door in a rectangular-shaped odorless funeral home, but was Life&#39;s sister, Beauty was clothed in the enigmatic glow of Death and walked in its shoes; then gradually, Death&#39;s mischievous twinkle in the eye was replaced by icy terror. But when I grew up, some people still remembered Death&#39;s playfulness and thought that if only they could beat it at its own game, they would eventually cheat death 21 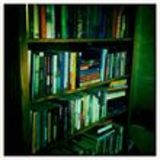