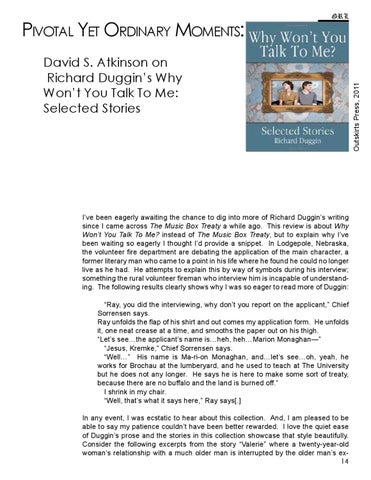 David S. Atkinson on Richard Duggin’s Why Won’t You Talk To Me: Selected Stories

I’ve been eagerly awaiting the chance to dig into more of Richard Duggin’s writing since I came across The Music Box Treaty a while ago. This review is about Why Won’t You Talk To Me? instead of The Music Box Treaty, but to explain why I’ve been waiting so eagerly I thought I’d provide a snippet. In Lodgepole, Nebraska, the volunteer fire department are debating the application of the main character, a former literary man who came to a point in his life where he found he could no longer live as he had. He attempts to explain this by way of symbols during his interview; something the rural volunteer fireman who interview him is incapable of understanding. The following results clearly shows why I was so eager to read more of Duggin: “Ray, you did the interviewing, why don’t you report on the applicant,” Chief Sorrensen says. Ray unfolds the flap of his shirt and out comes my application form. He unfolds it, one neat crease at a time, and smooths the paper out on his thigh. “Let’s see…the applicant’s name is…heh, heh…Marion Monaghan—” “Jesus, Kremke,” Chief Sorrensen says. “Well…” His name is Ma-ri-on Monaghan, and…let’s see…oh, yeah, he works for Brochau at the lumberyard, and he used to teach at The University but he does not any longer. He says he is here to make some sort of treaty, because there are no buffalo and the land is burned off.” I shrink in my chair. “Well, that’s what it says here,” Ray says[.] In any event, I was ecstatic to hear about this collection. And, I am pleased to be able to say my patience couldn’t have been better rewarded. I love the quiet ease of Duggin’s prose and the stories in this collection showcase that style beautifully. Consider the following excerpts from the story “Valerie” where a twenty-year-old woman’s relationship with a much older man is interrupted by the older man’s ex14