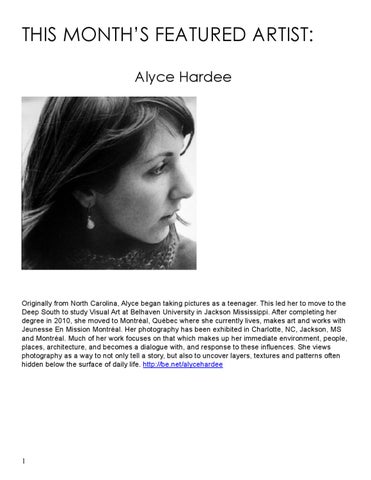 Originally from North Carolina, Alyce began taking pictures as a teenager. This led her to move to the Deep South to study Visual Art at Belhaven University in Jackson Mississippi. After completing her degree in 2010, she moved to Montréal, Québec where she currently lives, makes art and works with Jeunesse En Mission Montréal. Her photography has been exhibited in Charlotte, NC, Jackson, MS and Montréal. Much of her work focuses on that which makes up her immediate environment, people, places, architecture, and becomes a dialogue with, and response to these influences. She views photography as a way to not only tell a story, but also to uncover layers, textures and patterns often hidden below the surface of daily life. http://be.net/alycehardee Reviews and Essays on Contemporary Poetry and Literary Fiction

Reviews and Essays on Contemporary Poetry and Literary Fiction