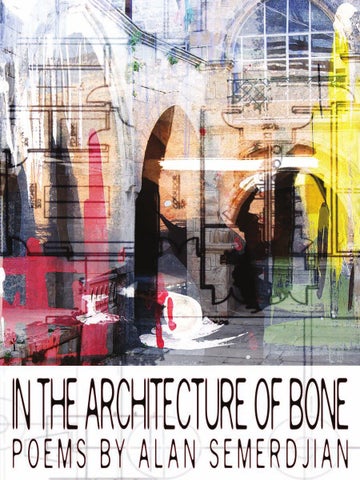 in the architecture of bone

in the architecture of bone

Alan Semerdjian, In the Architecture of Bone ÂŠ 2009 Alan Semerdjian First edition, October 2009 ISBN: 9780982359402 Printed and bound in the USA Library of Congress Control Number: 2009934912 The cover design incorporates a painting by Simon Samsonian. Author photo by Peter Ragona. For information regarding GenPop Books distribution, personal orders, and catalogue requests, please visit our website at www.genpopbooks.com. Reproduction of selections from this book, for non-commercial personal or educational purposes, is permitted and encouraged, provided the Author and Publisher are acknowledged in the reproduction. Reproduction for sale, rent, or other use involving financial transaction is prohibited except by permission of the Author and Publisher.

Contents A Fortune in a Cup of Turkish Coffee One How Turkish Coffee Got Its Name Orchestra Monster in Suburbia (Around the Perimeter of the House at Night) Netherworld The Aerodynamics Reconfiguration of Plants The Duduk A Place Like Saigon Pressure Cooker History Lesson Dinner Plans Lucky How to Read a Fortune in a Cup of Turkish Coffee Son, net Makeup Cubism My American Friends in My Grandfatherâ&#x20AC;&#x2122;s Closet Short Fuse Fragments of a Composition with Grandfather Photosynthesis Cubist-Impressionist Survivor: Dream for Two Voices

Acknowledgments About the Author

for Simon Samsonian (cubist-impressionist, grandfather) and the idea of family

Perhaps it is our function to illuminate some dark corner of the universe. { Gostan Zarian }

A Fortune in a Cup of Turkish Coffee

How Turkish Coffee Got Its Name I want to bring coffee here and read the gas station attendantâ&#x20AC;&#x2122;s fortune in the grounds that take the shape of a ghost or treasure chest. The kind of coffee my mother used to make. And before that, her mother. The kind that rises in the pot on the stove. Rises like the inside of a volcano. The side you never see until it reaches the brim. Then you pull it off and serve it. In tiny cups. The kind Iâ&#x20AC;&#x2122;ll bring and spread out across the counter during an oil change.

I want to bring this, but Iâ&#x20AC;&#x2122;m not sure what to call it. My mother called it soorj, the Armenian word for coffee. And when she translated it to me and my American friends, it was Turkish coffee. It was always Turkish coffee. And it was easy to remember that way.

I want to bring it here to these two men and their family who own the station. I know they’re Turkish because it’s in their eyes. It’s in their eyes because of the way they look at me when I speak the few words in Turkish that I know. I know these words because I am Armenian. That is also why I know they are Turkish. Typically, I should know more than a few words – most Turks know a little Armenian; most Armenians know a lot of Turkish – but I wasn’t born there.

I am also carrying a book of Nazim Hikmet’s jail poems. After getting out of prison, he wrote, “This Armenian citizen won’t forgive / his father’s slaughter in the Kurdish mountains. / But he likes you, / because you also can’t forgive / those who blackened the Turkish people’s name.” He wrote many beautiful poems about many different subjects. He is a famous Turkish poet.

The man at the gas station notices my book: How you read that now? he asks me. I tell him I want to learn how to write poetry. I ask him his name. We begin to name things, everything else: Syria, Cairo, father and joke, traditional instruments and Ataturk, government and politics, love and work, other poets, and, eventually, itâ&#x20AC;&#x2122;s time to go.

Lucky for Diana Der Hovanessian I thought of her at a blackjack table with scarlet and midnight chips at her side pondering situations for two Armenians looking sideways for each other, writing poems during shuffles. And how she wrote Playing cards with an Armenian is different from playing cards with anyone else. almost desperately before she crossed it out and looked at me, silent because when two Armenians are quiet itâ&#x20AC;&#x2122;s not that theyâ&#x20AC;&#x2122;ve found enough to say.

Hyphen, the terrible, me, though what if or a place What if everything hyphens, white snakes on a road Hyphen, and dash,

the ignitable, the Armenian- very nothing like real is a list dorsal and inter- with the terrible, what if nothing

… There are myths of paper, sleeves and intention – two ideas and a preposition – instead of one thought of a thing, like Why are you leaving? Like solid, like sure, like dune is to water. A moment like this is a man afraid of water, is the surest, the final way to surmise something like a break in love or genocide. He is in it, like the lyric, staccato footprints in the air, like sand in island. He is inside the mouth of the coming, the whale, the invisible one, with clothes the color of indecision and life, the strange partial missing that befuddles, the new, aching music he never thought he’d get to.

: The last thing he remembers is a dark hostile wandering in a gypsy night, how over a month ago something changed desperately: over a month ago, dressed in familiar clothes; a month ago, in middle of traffic; a month ago, favorite white sofa, a month ago, tea on a stove, locked room; a month ago, shave; the smell of Ottoman under feet, the idea of home he is slowly forgetting/remembering; accident thinner than air, swollen and floating up, a slow art of walking backwards in time.

; Then the relationship ceased to exist. On the one hand was the fact of knowing about it ahead of time, the other being there when it just ambushes you. What will you be saying when it happens? Cursing the day you never knew? You wish.

. Itâ&#x20AC;&#x2122;s amazing how a man so fascinated with dates could die on such an ordinary one.

For hours, the family believed in nothing but what the news told them to believe until.

Today, more Armenians live outside Armenia than in it. { Margo True }

Acknowledgments The author is grateful to the following print and online publications in which selections from In the Architecture of Bone first appeared: Ararat, Lyric Review, Diagram, Colere, Segue, Whalelane, canwehaveourballback, Steel Point Quarterly, Runes, Rattapallax/Fusebox, Black Zinnias, Poetrybay, Minimus, The Improper, Arson, Literary Groong, and Traverse. The production of this book was made possible in part through a donation from an anonymous benefactor of the arts and literature.

About the Author Writer and musician Alan Semerdjianâ&#x20AC;&#x2122;s poems and essays have appeared in several print and online publications and anthologies including Chain, The Lyric Review, Adbusters, Arson, Ararat, and Diagram. He released a chapbook of poems called An Improvised Device (Lock n Load Press) in 2005. His songs have appeared in television and film and charted on CMJ. Alan has performed and read all over North America. He currently teaches at Herricks High School in New Hyde Park, NY and resides in New York Cityâ&#x20AC;&#x2122;s East Village. 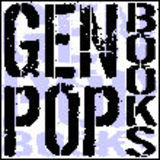 In the Architecture of Bone (Excerpt)

In the Architecture of Bone is the spirit of Armenia streaming through the mnemonic of Semerdjian’s family and their abode. This “evidence”...

In the Architecture of Bone (Excerpt)

In the Architecture of Bone is the spirit of Armenia streaming through the mnemonic of Semerdjian’s family and their abode. This “evidence”...