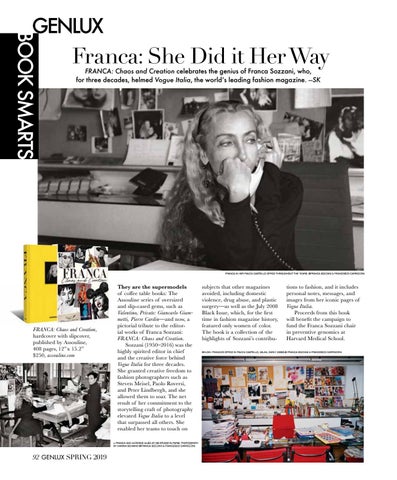 GENLUX Franca: She Did it Her Way FRANCA: Chaos and Creation celebrates the genius of Franca Sozzani, who, for three decades, helmed Vogue Italia, the world’s leading fashion magazine. —SK

FRANCA IN HER PIAZZA CASTELLO OFFICE THROUGHOUT THE YEARS. ©FRANCA SOZZANI & FRANCESCO CARROZZINI

They are the supermodels of coffee table books: The Assouline series of oversized and slip-cased gems, such as Valentino, Private: Giancarlo Giammetti, Pierre Cardin—and now, a pictorial tribute to the editorial works of Franca Sozzani: FRANCA: Chaos and Creation. Sozzani (1950–2016) was the highly spirited editor in chief and the creative force behind Vogue Italia for three decades. She granted creative freedom to fashion photographers such as Steven Meisel, Paolo Roversi, and Peter Lindbergh, and she allowed them to soar. The net result of her commitment to the storytelling craft of photography elevated Vogue Italia to a level that surpassed all others. She enabled her teams to touch on < FRANCA AND AZZEDINE ALAÏA AT HIS STUDIO IN PARIS. PHOTOGRAPH BY MARINA SCHIANO ©FRANCA SOZZANI & FRANCESCO CARROZZINI

subjects that other magazines avoided, including domestic violence, drug abuse, and plastic surgery—as well as the July 2008 Black Issue, which, for the first time in fashion magazine history, featured only women of color. The book is a collection of the highlights of Sozzani’s contribu-

tions to fashion, and it includes personal notes, messages, and images from her iconic pages of Vogue Italia. Proceeds from this book will benefit the campaign to fund the Franca Sozzani chair in preventive genomics at Harvard Medical School. 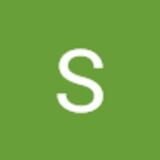 GENLUX is the only California-based luxury fashion and philanthropy magazine. We not only focus on the fashion, beauty and travel trends, bu...

GENLUX is the only California-based luxury fashion and philanthropy magazine. We not only focus on the fashion, beauty and travel trends, bu...