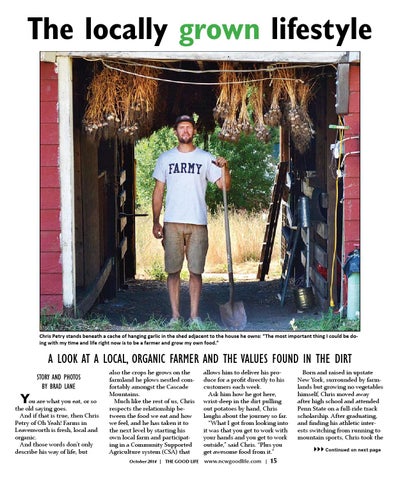 Chris Petry stands beneath a cache of hanging garlic in the shed adjacent to the house he owns: “The most important thing I could be doing with my time and life right now is to be a farmer and grow my own food.”

A look at a local, organic farmer and the values found in the dirt Story and photos by Brad Lane

ou are what you eat, or so the old saying goes. And if that is true, then Chris Petry of Oh Yeah! Farms in Leavenworth is fresh, local and organic. And those words don’t only describe his way of life, but

also the crops he grows on the farmland he plows nestled comfortably amongst the Cascade Mountains. Much like the rest of us, Chris respects the relationship between the food we eat and how we feel, and he has taken it to the next level by starting his own local farm and participating in a Community Supported Agriculture system (CSA) that October 2014 | The Good Life

allows him to deliver his produce for a profit directly to his customers each week. Ask him how he got here, wrist-deep in the dirt pulling out potatoes by hand, Chris laughs about the journey so far. “What I got from looking into it was that you get to work with your hands and you get to work outside,” said Chris. “Plus you get awesome food from it.” www.ncwgoodlife.com

Born and raised in upstate New York, surrounded by farmlands but growing no vegetables himself, Chris moved away after high school and attended Penn State on a full-ride track scholarship. After graduating, and finding his athletic interests switching from running to mountain sports, Chris took the

}}} Continued on next page Married to a confirmed golfer • Buying the Woods House • A family hikes into the wilds of Vancouver Island • Revisiting Buck Creek • Organic...

Married to a confirmed golfer • Buying the Woods House • A family hikes into the wilds of Vancouver Island • Revisiting Buck Creek • Organic...