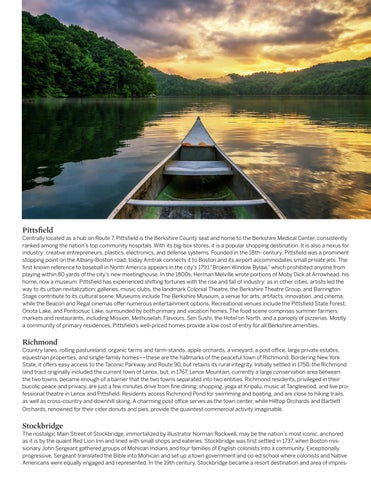 Centrally located as a hub on Route 7, Pittsfield is the Berkshire County seat and home to the Berkshire Medical Center, consistently ranked among the nation’s top community hospitals. With its big-box stores, it is a popular shopping destination. It is also a nexus for industry: creative entrepreneurs, plastics, electronics, and defense systems. Founded in the 18th- century, Pittsfield was a prominent stopping point on the Albany-Boston road; today Amtrak connects it to Boston and its airport accommodates small private jets. The first known reference to baseball in North America appears in the city’s 1791 “Broken Window Bylaw,” which prohibited anyone from playing within 80 yards of the city’s new meetinghouse. In the 1800s, Herman Melville wrote portions of Moby Dick at Arrowhead, his home, now a museum. Pittsfield has experienced shifting fortunes with the rise and fall of industry: as in other cities, artists led the way to its urban revitalization: galleries, music clubs, the landmark Colonial Theatre, the Berkshire Theatre Group, and Barrington Stage contribute to its cultural scene. Museums include The Berkshire Museum, a venue for arts, artifacts, innovation, and cinema, while the Beacon and Regal cinemas offer numerous entertainment options. Recreational venues include the Pittsfield State Forest, Onota Lake, and Pontoosuc Lake, surrounded by both primary and vacation homes. The food scene comprises summer farmers markets and restaurants, including Mission, Methuselah, Flavours, Sen Sushi, the Hotel on North, and a panoply of pizzerias. Mostly a community of primary residences, Pittsfield’s well-priced homes provide a low cost of entry for all Berkshire amenities.

Country lanes, rolling pastureland, organic farms and farm-stands, apple orchards, a vineyard, a post office, large private estates, equestrian properties, and single-family homes––these are the hallmarks of the peaceful town of Richmond. Bordering New York State, it offers easy access to the Taconic Parkway and Route 90, but retains its rural integrity. Initially settled in 1750, the Richmond land tract originally included the current town of Lenox, but, in 1767, Lenox Mountain, currently a large conservation area between the two towns, became enough of a barrier that the two towns separated into two entities. Richmond residents, privileged in their bucolic peace and privacy, are just a few minutes drive from fine dining, shopping, yoga at Kripalu, music at Tanglewood, and live professional theatre in Lenox and Pittsfield. Residents access Richmond Pond for swimming and boating, and are close to hiking trails, as well as cross-country and downhill skiing. A charming post office serves as the town center, while Hilltop Orchards and Bartlett Orchards, renowned for their cider donuts and pies, provide the quaintest commercial activity imaginable.

The nostalgic Main Street of Stockbridge, immortalized by illustrator Norman Rockwell, may be the nation’s most iconic, anchored as it is by the quaint Red Lion Inn and lined with small shops and eateries. Stockbridge was first settled in 1737, when Boston missionary John Sergeant gathered groups of Mohican Indians and four families of English colonists into a community. Exceptionally progressive, Sergeant translated the Bible into Mohican and set up a town government and co-ed school where colonists and Native Americans were equally engaged and represented. In the 19th century, Stockbridge became a resort destination and area of impres-