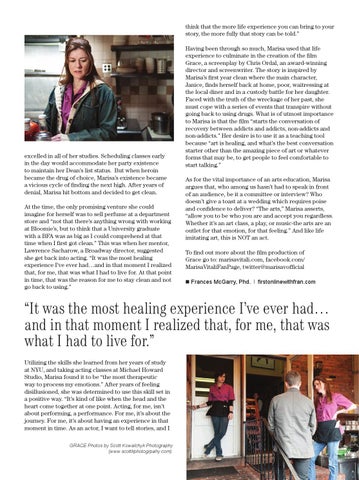 think that the more life experience you can bring to your story, the more fully that story can be told.”

excelled in all of her studies. Scheduling classes early in the day would accommodate her party existence to maintain her Dean’s list status. But when heroin became the drug of choice, Marisa’s existence became a vicious cycle of finding the next high. After years of denial, Marisa hit bottom and decided to get clean. At the time, the only promising venture she could imagine for herself was to sell perfume at a department store and “not that there’s anything wrong with working at Bloomie’s, but to think that a University graduate with a BFA was as big as I could comprehend at that time when I first got clean.” This was when her mentor, Lawrence Sacharow, a Broadway director, suggested she get back into acting. “It was the most healing experience I’ve ever had…and in that moment I realized that, for me, that was what I had to live for. At that point in time, that was the reason for me to stay clean and not go back to using.”

Having been through so much, Marisa used that life experience to culminate in the creation of the film Grace, a screenplay by Chris Ordal, an award-winning director and screenwriter. The story is inspired by Marisa’s first year clean where the main character, Janice, finds herself back at home, poor, waitressing at the local diner and in a custody battle for her daughter. Faced with the truth of the wreckage of her past, she must cope with a series of events that transpire without going back to using drugs. What is of utmost importance to Marisa is that the film “starts the conversation of recovery between addicts and addicts, non-addicts and non-addicts.” Her desire is to use it as a teaching tool because “art is healing, and what’s the best conversation starter other than the amazing piece of art or whatever forms that may be, to get people to feel comfortable to start talking.” As for the vital importance of an arts education, Marisa argues that, who among us hasn’t had to speak in front of an audience, be it a committee or interview? Who doesn’t give a toast at a wedding which requires poise and confidence to deliver? “The arts,” Marisa asserts, “allow you to be who you are and accept you regardless. Whether it’s an art class, a play, or music-the arts are an outlet for that emotion, for that feeling.” And like life imitating art, this is NOT an act. To find out more about the film production of Grace go to: marisavitali.com, facebook.com/ MarisaVitaliFanPage, twitter@marisavofficial n Frances McGarry, Phd. | firstonlinewithfran.com

“It was the most healing experience I’ve ever had… and in that moment I realized that, for me, that was what I had to live for.” Utilizing the skills she learned from her years of study at NYU, and taking acting classes at Michael Howard Studio, Marisa found it to be “the most therapeutic way to process my emotions.” After years of feeling disillusioned, she was determined to use this skill set in a positive way. “It’s kind of like when the head and the heart come together at one point. Acting, for me, isn’t about performing, a performance. For me, it’s about the journey. For me, it’s about having an experience in that moment in time. As an actor, I want to tell stories, and I GRACE Photos by Scott Kowalchyk Photography (www.scottkphotogrpahy.com).