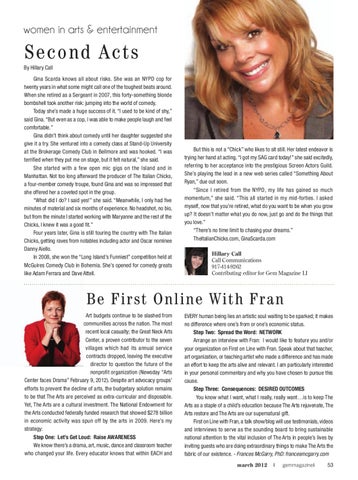 Second Acts By Hillary Call Gina Scarda knows all about risks. She was an NYPD cop for twenty years in what some might call one of the toughest beats around. When she retired as a Sergeant in 2007, this forty-something blonde bombshell took another risk: jumping into the world of comedy. Today she’s made a huge success of it. “I used to be kind of shy,” said Gina. “But even as a cop, I was able to make people laugh and feel comfortable.” Gina didn’t think about comedy until her daughter suggested she give it a try. She ventured into a comedy class at Stand-Up University at the Brokerage Comedy Club in Bellmore and was hooked. “I was terrified when they put me on stage, but it felt natural,” she said. She started with a few open mic gigs on the Island and in Manhattan. Not too long afterward the producer of The Italian Chicks, a four-member comedy troupe, found Gina and was so impressed that she offered her a coveted spot in the group. “What did I do? I said yes!” she said. “Meanwhile, I only had five minutes of material and six months of experience. No headshot, no bio, but from the minute I started working with Maryanne and the rest of the Chicks, I knew it was a good fit.” Four years later, Gina is still touring the country with The Italian Chicks, getting raves from notables including actor and Oscar nominee Danny Aiello. In 2008, she won the “Long Island’s Funniest” competition held at McGuires Comedy Club in Bohemia. She’s opened for comedy greats like Adam Ferrara and Dave Attell.

But this is not a “Chick” who likes to sit still. Her latest endeavor is trying her hand at acting. “I got my SAG card today!” she said excitedly, referring to her acceptance into the prestigious Screen Actors Guild. She’s playing the lead in a new web series called “Something About Ryan,” due out soon. “Since I retired from the NYPD, my life has gained so much momentum,” she said. “This all started in my mid-forties. I asked myself, now that you’re retired, what do you want to be when you grow up? It doesn’t matter what you do now, just go and do the things that you love.” “There’s no time limit to chasing your dreams.” TheItalianChicks.com, GinaScarda.com Hillar y Call Call Communications 917-414-9262 Contributing editor for Gem Magazine LI

Be First Online With Fran Art budgets continue to be slashed from communities across the nation. The most recent local casualty; the Great Neck Arts Center, a proven contributor to the seven villages which had its annual service contracts dropped, leaving the executive director to question the future of the nonprofit organization (Newsday “Arts Center faces Drama” February 9, 2012). Despite art advocacy groups’ efforts to prevent the decline of arts, the budgetary solution remains to be that The Arts are perceived as extra-curricular and disposable. Yet, The Arts are a cultural investment. The National Endowment for the Arts conducted federally funded research that showed $278 billion in economic activity was spun off by the arts in 2009. Here’s my strategy: Step One: Let’s Get Loud: Raise AWARENESS We know there’s a drama, art, music, dance and classroom teacher who changed your life. Every educator knows that within EACH and

EVERY human being lies an artistic soul waiting to be sparked; it makes no difference where one’s from or one’s economic status. Step Two: Spread the Word: NETWORK Arrange an interview with Fran: I would like to feature you and/or your organization on First on Line with Fran. Speak about that teacher, art organization, or teaching artist who made a difference and has made an effort to keep the arts alive and relevant. I am particularly interested in your personal commentary and why you have chosen to pursue this cause. Step Three: Consequences: DESIRED OUTCOMES You know what I want, what I really, really want…is to keep The Arts as a staple of a child’s education because The Arts rejuvenate, The Arts restore and The Arts are our supernatural gift. First on Line with Fran, a talk show/blog will use testimonials, videos and interviews to serve as the sounding board to bring sustainable national attention to the vital inclusion of The Arts in people’s lives by inviting guests who are doing extraordinary things to make The Arts the fabric of our existence. - Frances McGarry, PhD: francesmcgarry.com march 2012