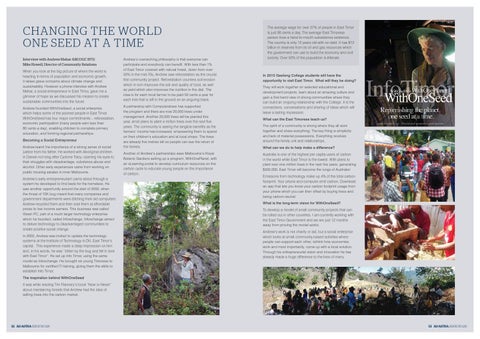 changing the world one seed at a time Interview with Andrew Mahar AM (OGC 1971) Mike Howell, Director of Community Relations When you look at the big picture of where the world is heading in terms of population and economic growth, it raises grave concerns about climate change and sustainability. However a phone interview with Andrew Mahar, a social entrepreneur in East Timor, gave me a glimmer of hope as we discussed his mission to create sustainable communities into the future. Andrew founded WithOneSeed, a social enterprise which helps some of the poorest people in East Timor. WithOneSeed has four major commitments – reforestation, economic participation (many people earn less than 80 cents a day), enabling children to complete primary education, and forming regional partnerships. Becoming a Social Entrepreneur Andrew learnt the importance of a strong sense of social justice from his father. He worked with Aboriginal children in Darwin not long after Cyclone Tracy, opening his eyes to their struggles with disadvantage, substance abuse and alcohol. Other early experiences came from working on public housing estates in inner Melbourne. Andrew’s early entrepreneurism came about through a system he developed to find beds for the homeless. He saw another opportunity around the start of 2000, when the threat of Y2K bug meant that many companies and government departments were ditching their old computers. Andrew recycled them and then sold them at affordable prices to low income earners. This business was called Green PC, part of a much larger technology enterprise which he founded, called Infoxchange. Infoxchange aimed to deliver technology to disadvantaged communities to create positive social change. In 2002, Andrew was invited to update the technology systems at the Institute of Technology in Dili, East Timor’s capital. This experience made a deep impression on him and, in his words, he was “bitten by the bug and fell in love with East Timor”. He set up Info Timor, using the same model as Infoxchange. He brought six young Timorese to Melbourne for certified IT training, giving them the skills to establish Info Timor.

Andrew’s overarching philosophy is that everyone can participate and everybody can benefit. With less than 1% of East Timor covered with natural forest, down from over 50% in the mid-70s, Andrew saw reforestation as the crucial first community project. Reforestation counters soil erosion which in turn improves the soil and quality of food, as well as yield which also improves the nutrition in the diet. The idea is for each local farmer to be paid 50 cents a year for each tree that is left in the ground on an ongoing basis. A partnership with Computershare has supported the program and there are now 20,000 trees under management. Another 20,000 trees will be planted this year, amid plans to plant a million trees over the next five years. The community is seeing the tangible benefits as the farmers’ income has increased, empowering them to spend on their children’s education and at local shops. The trees are already five metres tall so people can see the return of the forests. Another of Andrew’s partnerships sees Melbourne’s Royal Botanic Gardens setting up a program, WithOnePlanet, with an eLearning portal to develop curriculum resources on the carbon cycle to educate young people on the importance of carbon.

The average wage for over 37% of people in East Timor is just 80 cents a day. The average East Timorese person lives a hand-to-mouth subsistence existence. The country is only 12 years old with no debt. It has $12 billion in reserves from its oil and gas resources which the government can use to build the economy and civil society. Over 50% of the population is illiterate.

In 2015 Geelong College students will have the opportunity to visit East Timor. What will they be doing? They will work together on selected educational and development projects, learn about an amazing culture and gain a first-hand view of strong communities where they can build an ongoing relationship with the College. It is the connections, conversations and sharing of ideas which will leave a lasting impression. What can the East Timorese teach us? The spirit of a community is strong where they all work together and share everything. The key thing is simplicity and lack of material possessions. Everything revolves around the family unit and relationships. What can we do to help make a difference? Australia is one of the highest per capita users of carbon in the world while East Timor is the lowest. With plans to plant over one million trees in the next five years, generating $500,000, East Timor will become the lungs of Australia! Emissions from technology make up 4% of the total carbon footprint. Your phone and computer emit carbon. Download an app that lets you know your carbon footprint usage from your phone which you can then offset by buying trees and being carbon neutral. What is the long-term vision for WithOneSeed? To develop a model of small community projects that can be rolled out in other countries. I am currently working with the East Timor Government and we are just 12 months away from proving the model works. Andrew’s work is not charity or aid, but a social enterprise which looks at small community-based activities where people can support each other, rethink how economies work and most importantly, come up with a local solution. Through his entrepreneurial vision and innovation he has already made a huge difference to the lives of many.

The inspiration behind WithOneSeed It was while reading Tim Flannery’s book “Now or Never” about maintaining forests that Andrew had the idea of selling trees into the carbon market. 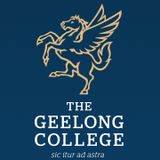