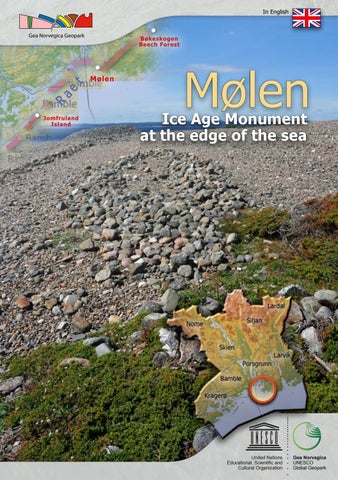 Ice Age Monument at the edge of the sea

MØLEN TAKES FORM When visiting Mølen it is easy to notice all of the large rounded stones on the beach. Upon closer look, you can see that they are all very different. Each and every stone has its own story to tell, about how it was made and how it came to this part of the coast. The power of ice 20 000 years ago Scandinavia was covered by ice. The up to several kilometre-thick ice eventually melted, and after a few thousand years the ice edge had receded far inland on the Norwegian mainland. The weight of the ice had pressed the land down– so the sea lay just in front of the ice edge. Then, about 13,000 years ago, it became colder and the ice advanced again. It stopped just where Bøkeskogen Beech Forest, Mølen and Jomfruland are located today. The ice stayed here for several hundred years, parked on the sea floor where a large ridge of sand, stone, gravel and clay was deposited – in what is called an end moraine. The stones had been carried by the ice on its way over Telemark, Buskerud and Vesfold counties. Then, 11,700 years ago, the Ice Age came to an abrupt halt. The ice melted back up the valleys and gradually disappeared.

The Glacier&#39;s Offspring Ridges of stone and gravel lay on the sea floor. The weight that had pressed down the land was now gone, and the land began to rise. Waves and currents began to sort and round-off the stones, and after a time the top of the ridge began to emerge from the

The extent of the ice sheet in Scandinavia roughly 13,000 years ago, when Mølen was formed.

surface of the sea. We find remains of that mighty ridge today, along the whole coast of Norway. We call it the “Ra Moraine”, or just the “Ra”, and here at Mølen its surface is especially well-sorted.

OUR ANCESTOR’S MØLEN The expansive moraine landscape out here at the waters edge seems even more special with its collection of stone mounds, laboriously placed there by our forefathers during the younger Iron Age. There are more than 200 of these stone piles and mounds here. One can consider the whole beach as one enormous graveyard, since many of these stone formations are graves. In this graveyard there are 16 burial mounds of considerable size, of which four can be considered so-called large burial mounds, with a diameter of between 25 and 30 metres.

Just east of the cobblestone beach the landscape reflects a very different history than Ice Age moraine formation. The smooth, rounded rocks here are made of basalt, a result of volcanic activity roughly 300 million years ago.

A VIBRANT LANDSCAPE Mølen is more than a monument to the Ice Age and Iron Age. The landscape out here continues to be exposed to processes of change and is, as it appears today, a product of both nature and culture. Mølen&#39;s “gentle surface” – its flora and fauna, are in many ways unique yet at the same time significantly influenced by human activity - or the absence of it. Throughout Mølen&#39;s history its natural resources have been harvested, and slowly but surely formed a cultural landscape. Parts of Mølen were used for grazing until far into the modern age and this contributed to holding the landscape open and varied. Right: Without grazing domestic animals the thickets grow dense and spread fast. Bushes and shrubs like blackthorn, here in blossom, find conditions favourable.

Important: Mølen is protected because of its cultural monuments, so it is prohibited to move the cobblestones or take any stones home with you. Also, do not disturb the stone mounds; climbing on them is not allowed. Do not build new mounds, either; it destroys both the cultural and natural landscape!

Bird life Mølen&#39;s position out here toward the Skagerrak, centrally placed in the migration route of many birds, makes it an important place for bird observation and ring-marking. Both in autumn and spring one can see a large number of species that stop off here for a time before continuing their journey south – or northward. A total of 320 different species have been observed, several of them rare in Norway. © Gea Norvegica Geopark 2016 Lay-out and photos by J.F.

A short distance from the parking lot there is a geological exhibition. Here you can see typical examples of the cobblestone beach&#39;s diversity – with explanations of the stone&#39;s origin and their journey to Mølen.