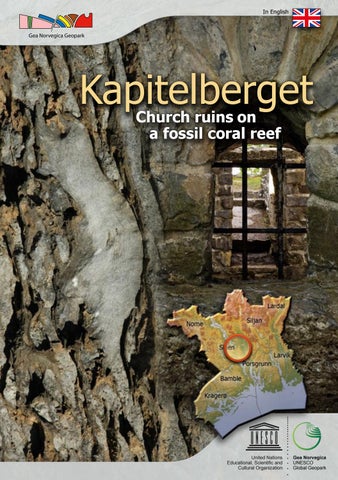 FROM THE EARTH&#39;S PRECAMBRIAN ERA TO THE HISTORICAL MIDDLE AGES If you want to know more about both geology and cultural history, it is worth taking a walk to a certain ridge southeast of Skien Centre. In a small isolated area, known as Kapitelberget, there is a fossil coral reef that was formed about 430 million years ago. The ruins of a Crypt Church from the Middle Ages is perched on top of the reef! A sea floor from the distant past 430 million years ago the earth was quite different from today. The continents had a completely different shape and location than they do today. In this period, known as the Silurian, the continental plate that Norway was a part of, known as Baltika, lay south of the equator and was flooded by a shallow sea. This warm shallow sea provided the perfect conditions for a rich plant- and animal life.

Many of these animals and plants had an outer shell or inner skeleton of calcium carbonate that has become fossilized over the years and transformed into limestone, a common rocktype in the Grenland area. The fossils typically found at Kapitelberget are tabulate corals, horn corals and chain corals, as well as a type of sponge. The building stone that makes up the foundation of the church ruin was probably collected from the areas around Kapitelberget.

It might be difficult to imagine, but several hundred million years ago all of Norway was covered by a warm, shallow sea. At Kapitalberget we find many traces of the diversity of life from this period.

The church ruins at Kapitelberget were discovered in 1783, but were not renovated until the end of the 1900s. The walls have been repaired several times over the years. The stairway down to the crypt is visible in the middle of the picture.

Kapitelberget also shows traces of other geological events. Right across from Kapitelberget one can follow a diabase sill, ca. 1.5 metres wide. It rose from several kilometres down under the earthâ&amp;#x20AC;şs crust up through limestone, roughly 270 million years ago, in what is called the Permian Period. There was dramatic volcanism then, and activity in the earth&#39;s crust associated with the opening of the Oslo Rift. Diagonally tilted slate layers under the

limestone are also evidence of these crustal movements. An extraordinary ruin The Church ruin on the top of Kapitelberget is from a Crypt Church, probably built in the Middle Ages. A Crypt was a room under the altar that was often used for storing relics. Cross-section through part of the reef with numerous visible fossils â&amp;#x20AC;&amp;#x201C; among them corals and crinoids. Photo: Henrik Heyer

We know of only four such churches in Norway, and it was unusual to build churches of stone at that time. According to historical legend, the church was linked to the powerful family saga that ruled in Grenland in the 1100s. The church was strategically placed high up on an ancient coral reef, with a good view out over the landscape. Crinoids - a common part of the bottom fauna in Silurian times.

The majority of churches in Norway until that time were build of wood, so it is likely that the skills required for building a church out of stone were acquired from abroad.

REMEMBER: The Church ruin is protected by the Cultural Heritage Act and the geological sites are protected by the Law of Nature Conservation. Fossil collecting is not allowed – use your camera instead!

If we go down in the crypt, we walk on remnants of crinoid stalks which are abundant in the stone stairway… …The light circles are fossil cross-sections of crinoid stems.

Church ruin on a fossil reef