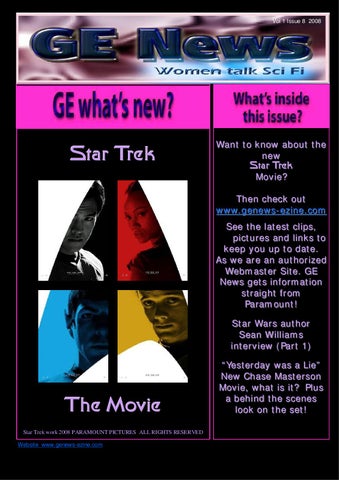 Want to know about the new

Then check out www.genews-ezine.com See the latest clips, pictures and links to keep you up to date. As we are an authorized Webmaster Site. GE News gets information straight from Paramount! Star Wars author Sean Williams interview (Part 1)

“Yesterday was a Lie” New Chase Masterson Movie, what is it? Plus a behind the scenes look on the set!

And why Sci Fi?

Why Sci Fi? Sci Fi because I am interested in science, that’s number one and I’m interested in humanity and what makes us human and I think science fiction is the best way to explore that topic. You can do it through any genre really, but science fiction gives us the chance to really play with the things we assume. I had a novel come out, a love story between two people, a whirlwind relationship over about 30 years, and they break up very very badly and don’t see each other for 150 years and what emotions that brings up you can only discuss in science fiction.

So it is quite liberating to write in that field?

Liberating? In some ways but very constricting in others because you have to get the science right sometimes and find ways to get around it when you want to break the laws. There’s a lot of research involved. I’ve been writing a main street thriller and in recent times and I love the fact that if I need to describe a place that exists there’s plenty of books on it, I don’t have to make anything up. If I want to describe a certain type of helicopter all the specs are online, I don’t have to make anything up. Writing a main stream fiction in that respects is a lot more research but sometimes less thought.

So how long would you take to research a particular aspect of your book?

Depends on the book, depends on how difficult it is to find the answers that I want. One series, the orphan series that I wrote, I invented a whole new series of units and I had to come up with a 3D map of all the stars within a 100 light years of earth. Stuff that you can download in seconds now but didn’t exist back then and that took some serious number crunching before I even got around to thinking about characters and settings and writing anything. So sometimes it can be very difficult, sometimes it’s easy, sometimes you can do it as you go along I’m quite a lazy researcher, I prefer to read New Scientist every week and lots of Science Magazines and I love collecting clippings hoping all that stuff sinks in okay and then researching whenever I get stuck. So some ways it’s easy, some ways that’s harder when you get stuck and realise something you should have researched six months ago is getting in the way of the story you want to write and you can’t find your way around it. That’s when I curse myself for being a bit lazy. (laughs)

So is research the fun part?

The fun part for me is probably originally coming up with the idea and starting to wrap the story together, characters, settings, all that sort of stuff. Research is part of that, it can be fun but I think that initial conception is the most fun part followed by the actual writing of the book. There’s nothing quite as good as sitting down and knocking out 2-3000 words of a fantastic story that I love writing, that’s why I do it, in telling myself this story, being told this story by myself is a lot of fun.! I quite enjoy editing as well it’s a whole different set of skills and experiences.

Good and bad things to both. I love writing, written for Star Wars and Doctor Who and I love the fact that with Star Wars there’s so much information there. If I need to describe a place I just look it up on Wikipedia and there it is. It’s brilliant! If it’s my own world, I have to make it all up, but sometimes that can be a curse too. With Star Wars you can’t make anything up, you’re constrained by what’s already there. In my own novels I can do whatever I like and that’s quite liberating and so I like both equally, and I work as hard at writing stuff in other people’s universes as I do in my own universe. I think doing anything less would be a betrayal of the reader who expects you to work as hard as you can to write as good a story as you can... End End of of Part Part one, one, make make sure sure you you catch catch part part two two in in our our next next issue! issue! www.seanwilliams.com

Yesterday WAS A LIE GE News was recently given the chance to preview Chase Masterson’s (Leeta, Star Trek: DS9) new movie “Yesterday was a Lie”. A science fiction, film noir, with Kipleigh Brown (Crewman Jane Taylor, Star Trek: Enterprise) as the lead character Hoyle and Chase as a sultry and of course very sexy lounge singer.

The film a concept of writer/director James Kirwin is a movie that can be said to transcend many different genres, a touch of thriller, a pinch of detective mystery and a touching character piece. Funded by Helicon Arts Cooperative and truly independent, this movie has been stacking up awards at many a film festival in the US, (including the Wrath of Con Film Festival, see GE News issue 3 and festival promoter Rick Albritton interview). Comments include …“weaves a tale of intrigue and metaphysical darkness” (Ain’t It Cool News) and “Kipleigh Brown “exudes Bacall” (Slice of SciFi).

Hoyle, a detective finds herself caught up in a world of intrigue and earth-shattering cosmological secrets with a sexy lounge singer (Chase Masterson) and a loyal partner (Mik Scriba) as her only allies. Hoyle finds that the most powerful force in the universe the power to bend reality, the power to know the truth lies within the human heart, according to Kirwin.

It is interesting to see that the main character is a women detective in what at times looks like it is set in the 1930s or is it the 2000s, dial phones (what are they!!) versus e-mails. The film makes you concentrate and you have to stay with it to make sure that you do not miss a sudden change of direction. In fact, this movie is better watched with your friends who like to discuss plot, character interplay and in fact, all aspects of life, the universe and everything.

Yesterday WAS A LIE Behind the scenes!

Certainly a movie that makes you think!! It is intelligent and intriguing cinema, with a touch of sultry sexiness. Oh and if you look quickly you may see Chewbacca (Peter Mayhew) who plays the role of the â&#x20AC;&#x153;dead manâ&#x20AC;?! In black and white (yes like in the olden days) and most definitely surreal, the movie grabs your attention as you concentrate on the many turns and twists of the plot. If you like your science fiction with a touch of music, scored by Kristopher Carter, Emmy award winning composer which Masterson very ably sings then this is a film for you. This film is not yet commercially released, but there are chances that you may be able to check it out at conventions in Australia in the near future. To get a taste of what this movie is about then head on over to the official film website where you can download the trailers http://www.heliconarts.com/yesterday/

FEEL FREE to pass GE NEWS on so that others can enjoy! To Subscribe click here suscribe@genews-ezine.com

Published by Gerri and Eugenia (GE)

Have a look at our MySpace site. If you want to know what is happening in the world of Sci Fi, Fantasy and Horror check out our friends on My Space. We have amazing friends! Authors of some of the great Sci Fi and Fantasy books you read as well as Official TV show sites and Official Actor sites as well. Add some of them to your own page and GE NEWS and let’s tell the world how much that we love all of these genres. Send an e-mail to your favorite actor or someone that has the same interests as you. There are some fantastic artists who do great artworks, there are podcast sites that point to their downloads and just simply fans as well. So come on over the light is always on and you can drop in anytime!

So let’s be friends! Click on the Picture to get there

© 2008 by GE News. All rights reserved Images are from the private collections of GE or contributors who hold all © Stargate, Dr Who, Star Trek and any other shows mentioned here are registered trademarks and GE News does not intend to infringe on the legal copy right or profit of owners of the content contained in this e-zine. Contact us at: contact@genews-ezine.com 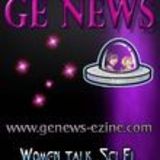