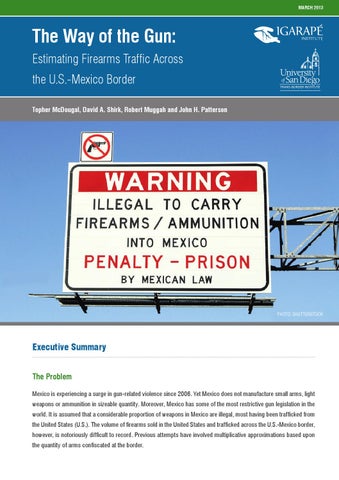 The Way of the Gun: Estimating Firearms Traffic Across the U.S.-Mexico Border

Executive Summary The Problem Mexico is experiencing a surge in gun-related violence since 2006. Yet Mexico does not manufacture small arms, light weapons or ammunition in sizeable quantity. Moreover, Mexico has some of the most restrictive gun legislation in the world. It is assumed that a considerable proportion of weapons in Mexico are illegal, most having been trafficked from the United States (U.S.). The volume of firearms sold in the United States and trafficked across the U.S.-Mexico border, however, is notoriously difficult to record. Previous attempts have involved multiplicative approximations based upon the quantity of arms confiscated at the border. The Way of the Gun:

The Way of the Gun: