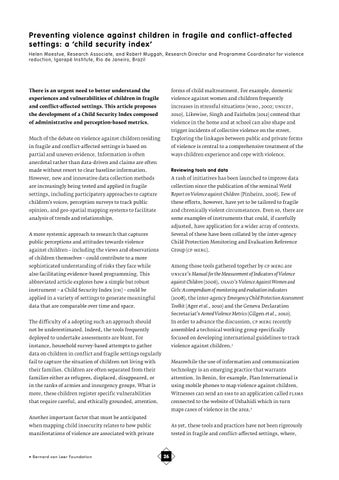 There is an urgent need to better understand the

experiences and vulnerabilities of children in fragile

violence against women and children frequently

and conflict-affected settings. This article proposes

increases in stressful situations (who, 2002; unicef,

the development of a Child Security Index composed

of administrative and perception-based metrics.

violence in the home and at school can also shape and trigger incidents of collective violence on the street.

Much of the debate on violence against children residing

Exploring the linkages between public and private forms

in fragile and conflict-affected settings is based on

of violence is central to a comprehensive treatment of the

anecdotal rather than data-driven and claims are often made without resort to clear baseline information.

A rash of initiatives has been launched to improve data

are increasingly being tested and applied in fragile

collection since the publication of the seminal World

settings, including participatory approaches to capture

Report on Violence against Children (Pinheiro, 2006). Few of

these efforts, however, have yet to be tailored to fragile

and chronically violent circumstances. Even so, there are

analysis of trends and relationships.

some examples of instruments that could, if carefully adjusted, have application for a wider array of contexts.

A more systemic approach to research that captures

Several of these have been collated by the inter-agency

public perceptions and attitudes towards violence

against children – including the views and observations

Among those tools gathered together by cp merg are

unicef’s Manual for the Measurement of Indicators of Violence

abbreviated article explores how a simple but robust

against Children (2006), usaid’s Violence Against Women and

instrument – a Child Security Index (csi) – could be

Girls: A compendium of monitoring and evaluation indicators

applied in a variety of settings to generate meaningful

data that are comparable over time and space.

The difficulty of a adopting such an approach should

In order to advance the discussion, cp merg recently

not be underestimated. Indeed, the tools frequently

deployed to undertake assessments are blunt. For

Meanwhile the use of information and communication

their families. Children are often separated from their

technology is an emerging practice that warrants

families either as refugees, displaced, disappeared, or

attention. In Benin, for example, Plan International is

in the ranks of armies and insurgency groups. What is

Witnesses can send an sms to an application called flsms

connected to the website of Ushahidi which in turn maps cases of violence in the area.2

As yet, these tools and practices have not been rigorously

manifestations of violence are associated with private

tested in fragile and conflict-affected settings, where,

A more systemic approach to research that captures public perceptions and attitudes towards violence against children – including the views and observations of children themselves – could contribute to a more sophisticated understanding of risks they face while also facilitating evidence-based programming. Photo • Courtesy CECIP

for many good reasons, forms of data collection on violence against children have largely been qualitative. An excellent example is unicef’s 2008 study of children’s perceptions in the southern border area of Thailand. Here unicef administered a quantitative analysis of qualitative data collected from 2600 boys and girls aged 7–17 through methods such as drawing exercises (of ‘good’ or ‘bad’ people and experiences), visual stimulus, neighbourhood maps, sentence completion and essays (on ‘my school’ or ‘visions of peace’). unicef partners also conducted an ‘attitude’ survey (unicef, 2008). There are some important precedents for assessing the experience of victimisation and insecurity in fragile and conflict-affected settings. Specifically,

perception, polling and attitude surveys have long been

In order to generate quality data for evidence-based

views and opinions, and are increasingly applied in

advocacy and programming on violence prevention, it

fragile and conflict-affected environments to inform

is important to develop a mechanism that accounts for

the specific needs and vulnerabilities of children. This

from repeated surveys are powerful if applied through a

process of triangulation with other sources – including

out metrics to measure the real and perceived safety and

security of young children in particular. While still at

the preliminary stage of development, and confronting a host of methodological and ethical challenges, the

There are also reasons to be cautious about household

csi would be a hugely valuable tool to track the diverse

perception surveys and to recognise their limitations.

ways in which children are victimised and cope during

As is well known to criminologists and behavioural

social scientists, the public’s fear of collective and interpersonal violence is not always in line with

Very generally, the proposed csi is constituted by a

basket of indicators that together allow a determination

events can influence attitudes and behaviours of

of the extent of real and perceived insecurity

individuals to a large extent. Likewise, there are many

encountered by children in fragile and conflict-affected

examples of residents in societies that are considered

settings. The csi also accounts for children’s own

qualitative views of their own experiences, capabilities,

perceptions of safety and security.

and response mechanisms. Selected indicators offer insights into the physical, psychological, and emotional well-being of children and ensure that they are not cast

‘The public’s fear of collective and interpersonal violence is not always in line with obser ved realit y.’

as passive actors, but rather active agents, even in the most complex of circumstances. While still in development, the csi will draw on both routinely collected administrative data and survey-

Even so, appraising people’s attitudes, including why

based information that capture the direct and indirect

and how they change, can help policymakers and

effects of violence and indices of real and relative safety.

Administrative data could include the incidence of

security and safety, including for families and children.

An example of this can be traced to Croatia, where the

based data could focus on children’s views of community

survey of security which informed government

unrest and violent punishment, how and when they

feel safe and afraid, notions of ‘safe areas’ in the

A similar exercise was pursued by the uk Department

Methodologically, relevant information would be

towards the police over a short period of time during

gathered through the administration of a survey

which an intervention had taken place. Although not

questionnaire designed and administered by the

necessarily demonstrating causality, such data are

Igarapé Institute3 and partners in Latin America and the

effective and powerful if used in conjunction with other

Caribbean. The format of the csi survey will be informed

sources through a process of triangulation.

by good practice and the accumulated experience of

Prospective indicators (to be disaggregated by age, sex, violence type and other variables where possible and appropriate) Physical harm from violence

the Institute and other specialists in epidemiology

A number of pilot sites would be selected to test out

and victimisation. Indeed, there is an array of basic

the csi. Indeed, these sites would include fragile and

principles that inform the administration of surveys in

fragile and conflict-affected settings (who, 2004; United

areas of Rio de Janeiro and other urban settings such

as Port-au-Prince. The survey will include core and

supplementary questions directed to a sample of

Mapping exercise of a favela from the perspective of children living there. Photo • Courtesy CECIP

children and/or their caregivers depending on age and

‘The CSI focuses not just on casualties, but on private forms of violence against children, such as within the home, as well as public forms of collective violence, including gang and street-level violence.’

in accordance with recommendations from experts. The survey results would also be combined with other administrative data to form the csi ‘score’. There is a wide-ranging literature on the ethical considerations associated with research on children and violence. Much of it focuses understandably on issues of informed consent, confidentiality, and wider accountability – along with specific child-friendly methodologies in researching issues around violence (Save the Children Alliance, 2004; Akeson, 2011; CarrollLind et al., 2011). Given these and other concerns, it is

possible that the csi would only draw on interviews

nuanced determination of vulnerability and priorities

with adults and with children older than 12. Indeed,

for intervention. We envisage that, with time, the

when interviewing it is practically and ethically less

geo-visualisation of csi scores may be complemented by

challenging to ask about positive experiences and life

maps that have been generated through mobile phone

skills than about violence itself, although the latter

reporting by children themselves.

may be explored ‘indirectly’. For example, children can be asked if they have skipped school due to feeling

Ideally, the csi indicators would also that satisfy ‘smart’

with children may act as proxy informants, including

and Timebound). Furthermore, they will not just focus

on negative risks and outcomes of violence but also on ‘positive’ indicators of well-being (see Lippman et al.

(2009) for further discussion on indicator development).

The overarching intention of the csi is to develop an

Data will be collected at the individual and household

accurate measure of levels of violence against children

level and, in the case of street children or non-residents,

in fragile and conflict-affected settings. The csi focuses

in areas where they can be accurately sampled. csi

not just on casualties, but on private forms of violence

data will ideally be supplemented with data from other

against children, such as within the home, as well as

public forms of collective violence, including gang and

capturing both real and perceived levels of insecurity

among children could serve as a wider proxy of the extent of safety in a given setting.

The csi will be piloted in purposively selected urban settings – specifically, a combination of low-, medium-

In addition to drawing attention to the specific rights

and upper-income settings in Rio de Janeiro. This will

and needs of children who are by definition high-risk

allow for testing of the variance in csi scores across

groups, the csi will also address ways of enhancing

socioeconomically diverse income groups as well as in

policies and programmes. Specifically, a csi will enable

areas affected by ‘higher’ and ’lower’ rates of real and

more effective targeting of interventions according

to demonstrable need in distinct geographic and

such as the one featured in the table below, will be pre-

demographic settings. A csi would also serve as a

tested in order to arrive at a robust and relatively simple

baseline to evaluate programmatic effectiveness over

time. And as indicators would be standardised and systematised into an index, the csi would facilitate

careful comparisons between countries and cities. An advantage of the csi includes the application of georeferencing methods to spatially analyse and present findings. On the basis of a shortlist of administrative and perception-based indicators and geo-referenced data gathered from surveys, it would be possible to spatially map and monitor how different categories of children are experiencing security and safety in areas affected by chronic and acute forms of violence. The visualisation of csi scores by neighbourhood would allow for a more Preventing violence against children in fragile and conflict-affected settings

Preventing violence against children in fragile and conflict-affected settings