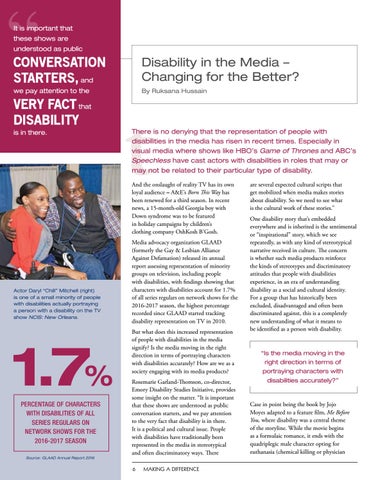 It is important that these shows are understood as public

Disability in the Media – Changing for the Better?

we pay attention to the

VERY FACT that DISABILITY is in there.

There is no denying that the representation of people with disabilities in the media has risen in recent times. Especially in visual media where shows like HBO’s Game of Thrones and ABC’s Speechless have cast actors with disabilities in roles that may or may not be related to their particular type of disability. And the onslaught of reality TV has its own loyal audience – A&amp;E’s Born This Way has been renewed for a third season. In recent news, a 15-month-old Georgia boy with Down syndrome was to be featured in holiday campaigns by children’s clothing company OshKosh B’Gosh.

Actor Daryl “Chill” Mitchell (right) is one of a small minority of people with disabilities actually portraying a person with a disability on the TV show NCIS: New Orleans.

Percentage of characters with PERCENTAGE OF CHARACTERS disabilities of all series reguWITH DISABILITIES OF ALL lars on network shows for the SERIES REGULARS ON 2016-2017 season NETWORK SHOWS FOR THE 2016-2017 SEASON Source: GLAAD Annual Report 2016

Rosemarie Garland-Thomson, co-director, Emory Disability Studies Initiative, provides some insight on the matter. “It is important that these shows are understood as public conversation starters, and we pay attention to the very fact that disability is in there. It is a political and cultural issue. People with disabilities have traditionally been represented in the media in stereotypical and often discriminatory ways. There 6

are several expected cultural scripts that get mobilized when media makes stories about disability. So we need to see what is the cultural work of these stories.” One disability story that’s embedded everywhere and is inherited is the sentimental or “inspirational” story, which we see repeatedly, as with any kind of stereotypical narrative received in culture. The concern is whether such media products reinforce the kinds of stereotypes and discriminatory attitudes that people with disabilities experience, in an era of understanding disability as a social and cultural identity. For a group that has historically been excluded, disadvantaged and often been discriminated against, this is a completely new understanding of what it means to be identified as a person with disability.

“Is the media moving in the right direction in terms of portraying characters with disabilities accurately?”

Case in point being the book by Jojo Moyes adapted to a feature film, Me Before You, where disability was a central theme of the storyline. While the movie begins as a formulaic romance, it ends with the quadriplegic male character opting for euthanasia (chemical killing or physician