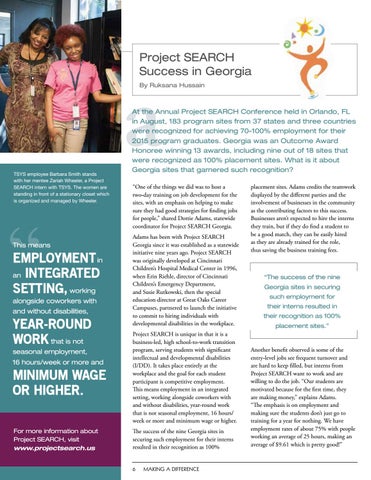 TSYS employee Barbara Smith stands with her mentee Zariah Wheeler, a Project SEARCH intern with TSYS. The women are standing in front of a stationary closet which is organized and managed by Wheeler.

EMPLOYMENT in an INTEGRATED SETTING, working alongside coworkers with and without disabilities,

YEAR-ROUND WORK that is not seasonal employment, 16 hours/week or more and

At the Annual Project SEARCH Conference held in Orlando, FL in August, 183 program sites from 37 states and three countries were recognized for achieving 70-100% employment for their 2015 program graduates. Georgia was an Outcome Award Honoree winning 13 awards, including nine out of 18 sites that were recognized as 100% placement sites. What is it about Georgia sites that garnered such recognition? “One of the things we did was to host a two-day training on job development for the sites, with an emphasis on helping to make sure they had good strategies for finding jobs for people,” shared Dottie Adams, statewide coordinator for Project SEARCH Georgia. Adams has been with Project SEARCH Georgia since it was established as a statewide initiative nine years ago. Project SEARCH was originally developed at Cincinnati Children’s Hospital Medical Center in 1996, when Erin Riehle, director of Cincinnati Children’s Emergency Department, and Susie Rutkowski, then the special education director at Great Oaks Career Campuses, partnered to launch the initiative to commit to hiring individuals with developmental disabilities in the workplace. Project SEARCH is unique in that it is a business-led, high school-to-work transition program, serving students with significant intellectual and developmental disabilities (I/DD). It takes place entirely at the workplace and the goal for each student participant is competitive employment. This means employment in an integrated setting, working alongside coworkers with and without disabilities, year-round work that is not seasonal employment, 16 hours/ week or more and minimum wage or higher. The success of the nine Georgia sites in securing such employment for their interns resulted in their recognition as 100% 6

placement sites. Adams credits the teamwork displayed by the different parties and the involvement of businesses in the community as the contributing factors to this success. Businesses aren’t expected to hire the interns they train, but if they do find a student to be a good match, they can be easily hired as they are already trained for the role, thus saving the business training fees.

“The success of the nine Georgia sites in securing such employment for their interns resulted in their recognition as 100% placement sites.”

Another benefit observed is some of the entry-level jobs see frequent turnover and are hard to keep filled, but interns from Project SEARCH want to work and are willing to do the job. “Our students are motivated because for the first time, they are making money,” explains Adams. “The emphasis is on employment and making sure the students don’t just go to training for a year for nothing. We have employment rates of about 75% with people working an average of 25 hours, making an average of $9.61 which is pretty good!”