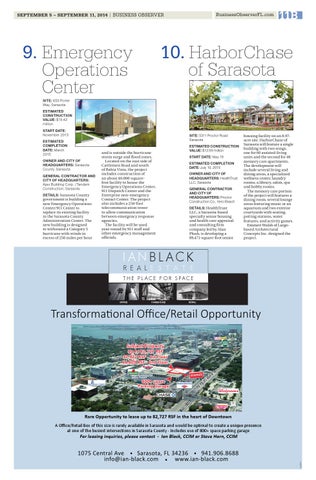 and is outside the hurricane storm surge and flood zones. Located on the east side of Cattlemen Road and south of Bahia Vista, the project includes construction of an about 40,000-squarefoot facility to house the Emergency Operations Center, 911 Dispatch Center and the Enterprise non-emergency Contact Center. The project also includes a 250-foot telecommunication tower to allow communication between emergency response agencies. The facility will be used year-round by 911 staff and other emergency management officials.

housing facility on an 8.97acre site. HarborChase of Sarasota will feature a single building with two wings, one for 60 assisted-living units and the second for 48 memory care apartments. The development will include several living and dining areas, a specialized wellness center, laundry rooms, a library, salon, spa and hobby rooms. The memory care portion of the project will features a dining room, several lounge areas featuring music or an aquarium and two exterior courtyards with seating, potting stations, water features, and activity games. Emmett Walsh of Largobased Architectural Concepts Inc. designed the project.

Rare Opportunity to lease up to 82,727 RSF in the heart of Downtown