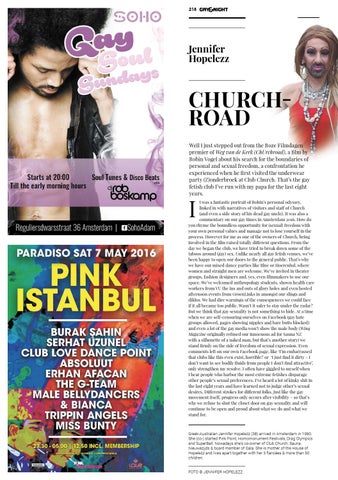 CHURCHROAD Well I just stepped out from the Roze Filmdagen premier of Weg van de Kerk (ChUrchroad), a  lm by Robin Vogel about his search for the boundaries of personal and sexual freedom, a confrontation he experienced when he  rst visited the underwear party (Z)onderbroek at Club Church. That’s the gay fetish club I’ve run with my papa for the last eight years.

t was a fantastic portrait of Robin’s personal odyssey, linked in with narratives of visitors and staff of Church (and even a side story of his dead gay uncle). It was also a commentary on our gay times in Amsterdam 2016. How do you rhyme the boundless opportunity for (sexual) freedom with your own personal values and manage not to lose yourself in the process. However for me as one of the owners of Church, being involved in the lm raised totally different questions. From the day we began the club, we have tried to break down some of the taboos around (gay) sex. Unlike nearly all gay fetish venues, we’ve been happy to open our doors to the general public. That’s why we have our mixed dance parties like Blue or Hoerenbal, where women and straight men are welcome. We’ve invited in theater groups, fashion designers and, yes, even lmmakers to use our space. We’ve welcomed anthropology students, shown health care workers from VU the ins and outs of glory holes and even hosted afternoon events from GroenLinks in amongst our slings and dildos. We had dire warnings of the consequences we could face if it all became too public. Wasn’t it safer to stay under the radar? But we think that gay sexuality is not something to hide. At a time when we are self-censuring ourselves on Facebook (gay hate groups allowed, pages showing nipples and bare butts blocked) and even a lot of the gay media won’t show the male body (Winq Magazine originally refused our innocuous ad for Sauna NZ with a silhouette of a naked man, but that’s another story) we stand rmly on the side of freedom of sexual expression. Even comments left on our own Facebook page, like ‘I’m embarrassed that clubs like this even exist, horrible!’ or ‘I just nd it dirty – I don’t want to see bodily uids from people I don’t nd attractive’, only strengthen my resolve. I often have giggled to myself when I hear people who harbor the most extreme fetishes disparage other people’s sexual preferences. I’ve heard a lot of kinky shit in the last eight years and have learned not to judge other’s sexual desires. Different strokes for different folks. Just like the gay movement itself, progress only occurs after visibility – so that’s why we refuse to shut the closet door on gay sexuality and will continue to be open and proud about what we do and what we stand for.

Greek-Australian Jennifer Hopelezz (38) arrived in Amsterdam in 1990. She (co-) started Pink Point, Homomonument Festivals, Drag Olympics and SuperBall. Nowadays she’s co-owner of Club Church, Sauna Nieuwezijds & board member of Gala. She is mother of the House of Hopelezz and lives apart together with her 3 ancées & more than 50 children. FOTO © JENNIFER HOPELEZZ 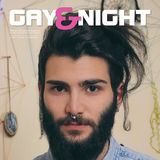