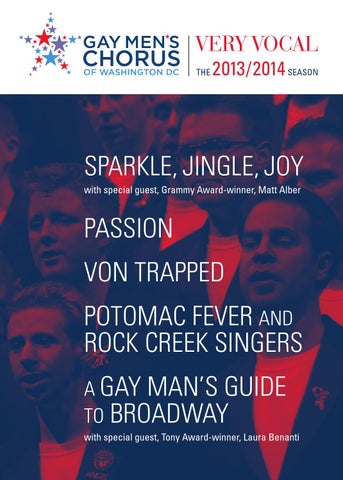 SPARKLE, JINGLE, JOY with special guest, Grammy Award-winner, Matt Alber The Gay Men’s Chorus of Washington at its very best for the season with traditional holiday favorites and new festive treats— all whipped up with the promise of fun and surprise that GMCW does so well. And the amazing Matt Alber returns to perform with our men after his triumph at Lisner in February in our wedding extravaganza. A perfect way to celebrate the holidays. Friday, December 20, 2013 at 8pm Saturday, December 21, 2013 at 3pm & 8pm Lisner Auditorium

PASSION The perfect antidote to the February blues. We’ll be singing gorgeous choral arrangements that will rock the rafters and lift your spirits. Saturday, February 15, 2014 at 3pm and 8pm Church of the Epiphany

YOU WON’T WANT TO MISS A SINGLE SHOW!

POTOMAC FEVER AND ROCK CREEK SINGERS Our premiere ensembles perform over 40 concerts annually in the greater community. But for one special concert, they will perform for our GMCW family all of their best material. Everything from Pop to Broadway to Classical will be on the program. Friday, April 18, 2014 at 8 pm New York Avenue Presbyterian Church or Saturday, April 19, 2014 at 5pm & 8pm The Mead Center for American Theater at Arena Stage

A GAY MAN’S GUIDE TO BROADWAY with special guest, Tony Award-winner, Laura Benanti There WILL be a test and you are sure to pass after GMCW teaches you everything a gay man needs to know about Broadway musicals. Our ABC’s will begin with Audra, Bernadette and Chita and end with the ‘‘Z’’ in Liza! A special Tony Award-winning guest is in the works who you won’t want to miss! Sunday, May 18, 2014 at 4pm Location To Be Announced

The Ultimate Savings—5-Show Subscription Don’t miss a single show. Get the best seats for the best price. $175 (orchestra) $125 (tier 1)

3 Ticket Pass Get three admissions to the shows of your choice. Choose which shows to see and when to see them. See three different shows yourself or bring two friends to one show. The choise is yours. $135 (orchestra) $81 (tier 1)

Cut along dotted line and return with your payment.