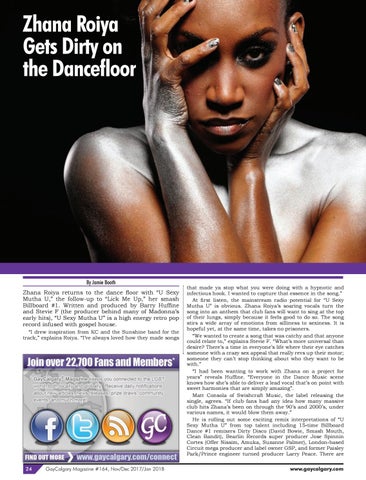 Zhana Roiya Gets Dirty on the Dancefloor

By Jamie Booth Zhana Roiya returns to the dance floor with “U Sexy Mutha U,” the follow-up to “Lick Me Up,” her smash Billboard #1. Written and produced by Barry Huffine and Stevie F (the producer behind many of Madonna’s early hits), “U Sexy Mutha U” is a high energy retro pop record infused with gospel house. “I drew inspiration from KC and the Sunshine band for the track,” explains Roiya. “I’ve always loved how they made songs

that made ya stop what you were doing with a hypnotic and infectious hook. I wanted to capture that essence in the song.” At first listen, the mainstream radio potential for “U Sexy Mutha U” is obvious. Zhana Roiya’s soaring vocals turn the song into an anthem that club fans will want to sing at the top of their lungs, simply because it feels good to do so. The song stirs a wide array of emotions from silliness to sexiness. It is hopeful yet, at the same time, takes no prisoners. “We wanted to create a song that was catchy and that anyone could relate to,” explains Stevie F. “What’s more universal than desire? There’s a time in everyone’s life where their eye catches someone with a crazy sex appeal that really revs up their motor; someone they can’t stop thinking about who they want to be with.” “I had been wanting to work with Zhana on a project for years” reveals Huffine. “Everyone in the Dance Music scene knows how she’s able to deliver a lead vocal that’s on point with sweet harmonies that are simply amazing”. Matt Consola of Swishcraft Music, the label releasing the single, agrees. “If club fans had any idea how many massive club hits Zhana’s been on through the 90’s and 2000’s, under various names, it would blow them away.” He is rolling out some exciting remix interpretations of “U Sexy Mutha U” from top talent including 15-time Billboard Dance #1 remixers Dirty Disco (David Bowie, Smash Mouth, Clean Bandit), Bearlin Records super producer Jose Spinnin Cortes (Offer Nissim, Amuka, Suzanne Palmer), London-based Circuit mega producer and label owner GSP, and former Paisley Park/Prince engineer turned producer Larry Peace. There are www.gaycalgary.com 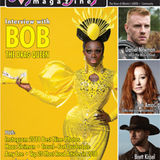