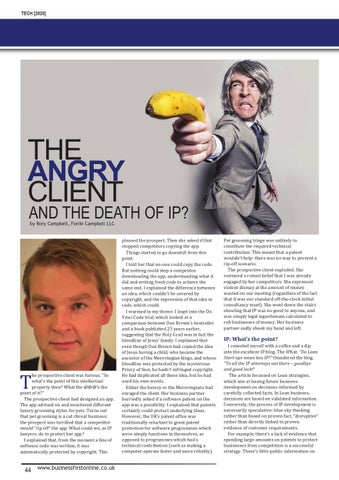 AND THE DEATH OF IP? by Rory Campbell, Forde Campbell LLC

he prospective client was furious. “So what’s the point of this intellectual property then? What the @@@’s the point of it?” The prospective client had designed an app. The app advised on and monitored different luxury grooming styles for pets. Turns out that pet grooming is a cut-throat business: the prospect was terrified that a competitor would “rip off” the app. What could we, as IP lawyers, do to protect her app? I explained that, from the moment a line of software code was written, it was automatically protected by copyright. This

pleased the prospect. Then she asked if that stopped competitors copying the app. Things started to go downhill from this point. I told her that no-one could copy the code. But nothing could stop a competitor downloading the app, understanding what it did and writing fresh code to achieve the same end. I explained the difference between an idea, which couldn’t be covered by copyright, and the expression of that idea in code, which could. I warmed to my theme. I leapt into the Da Vinci Code trial, which looked at a comparison between Dan Brown’s bestseller and a book published 25 years earlier, suggesting that the Holy Grail was in fact the bloodline of Jesus’ family. I explained that even though Dan Brown had copied the idea of Jesus having a child, who became the ancestor of the Merovingian kings, and whose bloodline was protected by the mysterious Priory of Sion, he hadn’t infringed copyright. He had duplicated all these idea, but he had used his own words. Either the heresy or the Merovingians had enraged the client. Her business partner hurriedly asked if a software patent on the app was a possibility. I explained that patents certainly could protect underlying ideas. However, the UK’s patent office was traditionally reluctant to grant patent protection for software programmes which were simply functions in themselves, as opposed to programmes which had a technical contribution (such as making a computer operate faster and more reliably).

Pet grooming triage was unlikely to constitute the required technical contribution. This meant that a patent wouldn’t help: there was no way to prevent a rip-off scenario. The prospective client exploded. She ventured a robust belief that I was already engaged by her competitors. She expressed violent dismay at the amount of money wasted on our meeting (regardless of the fact that it was our standard off-the-clock initial consultancy meet). She went down the stairs shouting that IP was no good to anyone, and was simply legal legerdemain calculated to rob businesses of money. Her business partner sadly shook my hand and left.

I consoled myself with a coffee and a dip into the excellent IP blog, The IPKat. “Do Lean Start-ups mean less IP?” thundered the blog. “To all the IP attorneys out there – goodbye and good luck!” The article focussed on Lean strategies, which aim at basing future business development on decisions informed by carefully collected facts. In Lean business, decisions are based on validated information. Conversely, the process of IP development is necessarily speculative: blue-sky thinking rather than based on proven fact, “disruptive” rather than directly linked to proven evidence of customer requirements. For example, there’s a lack of evidence that spending large amounts on patents to protect businesses from competition is a successful strategy. There’s little public information on 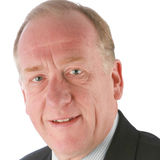