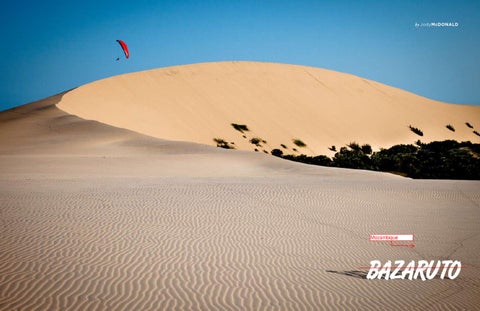 “Leave your shoes and your helmet at home. There is nothing to hit but soft white sand.”

s a pilot, I am sure I am not alone in feeling the incredible excitement of flying a new site. The jitters we all feel while driving or hiking to launch, the wonder that envelops us as we soar over new ground, and the never-ending drama that unfolds each time we get airborne are what makes every pilot addicted to our beloved sport.  That addiction drives many of us to seek out places to fly beyond our home hill, beyond our known horizon.   My partner and I have been traveling the oceans of the world on a kiteboarding and paragliding expedition since 2006.  In this time we’ve been fortunate to be the first to fly in a number of places, each more thrilling and mind-blowing than the last. But we made a discovery this season after crossing the infamous Mozambique Channel from Madagascar that will no doubt become one of the most treasured flying sites on earth.  Off the coast of the recently war-torn African nation of Mozambique, there is a small archipelago of islands that is home to, among other things, huge numbers of migrating Humpback whales, a very small number of flash resorts, and one of the prettiest lagoons on earth.  We sailed to this area in search of wind, arriving in the heart of the Southern Hemisphere winter, when tradewinds from the East predominate.  Our plan was to kiteboard and possibly use our tow winch to do a bit of

flying and exploring. We had no idea that the largest island in the group, Bazaruto, stretches north-to-south nearly 25 miles and houses what surely must be one of the largest dunes on the continent. Until our visit, the massive sand playground that fronts the island by the mesmerizing green Indian Ocean had never been flown.  Any pilot in the world would recognize the possibilities for flying at one glance. But since most people get to the island via the mainland, they never see the windward ocean side, which is how we arrived.  There is not a single man-made structure the whole length of the beach, and we never once had company other than ourselves. With a gentle sea breeze, the dune, which dwarfs Dune Du Pyla in France, is the stuff that even vivid dreamers cannot imagine.   Leave your shoes and your helmet at home.  There is nothing to hit but soft white sand.  To launch, simply get to the beach, chuck your wing out and take a single step. No need to hike up more than ten feet. Float your glider over your head, turn and loft into sheer bliss.  Drag your feet for a few inches or a few miles.  Get up high, huck acro over the ocean, return to the laminar elevator and repeat indefinitely.  Come down only when it gets too dark to see, or, if you arrive during a full moon, maybe not at all.

The Important Stuff Season: Go during the Southern Hemisphere winter, or SE Monsoon, June through October, when Easterly winds predominate and temperatures are cooler.  Look for winds from the NE to SE around 10 knots. Bring a speed wing for strong days.   Stay:  Unless you have a yacht, your only and best option is the fantastic and luxurious Indigo Bay Resort (www. indigobayresort.com <http://www.indigobayresort.com>), which sits directly behind the dune.  It’s not cheap, but it’s very romantic and has a great spa: bring your lover and she (or he) will forgive you for disappearing every day!  The resort can also now accommodate tandem passengers (they were pretty convinced after we gave them a spin).  A ten-minute car ride and very short hike and you’re there.  Contact Andy Conn, the General Manager, and tell them The Best Odyssey sent you.   info:  visit www.offshoreodysseys.com 24

The card with Flare. Submit your own image or choose one of these custom USHPA Platinum Rewards Cards.

• No annual fee. • $50 donation by the bank, to USHPA, when you first use the card.* • Ongoing contributions made when you continue using your card. • Low Introductory APR on purchases and no balance transfer fee for 6 months.** • Enhanced Visa Platinum benefits, including 24/7 Emergency Customer Service, 100% Fraud Protection, Auto Rental and Travel Accident Insurance and much more. • Earn points at hundreds of participating online retailers redeemable for namebrand merchandise, event tickets, gift cards or travel reward options.

Flying where no one has before

The crew of the Best Odyssey discovers a paragliding site off the coast of Mozambique that had never been flown. Until now.

Flying where no one has before

The crew of the Best Odyssey discovers a paragliding site off the coast of Mozambique that had never been flown. Until now.