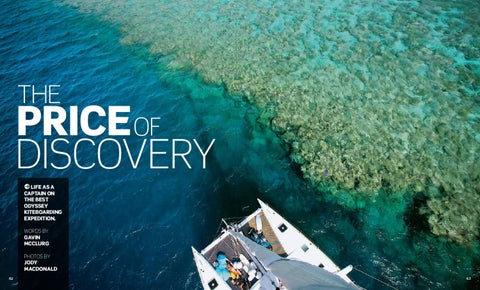 hen Lehman Brothers announced bankruptcy and the world’s economy turned upside down, my partner and I were on board our boat, Discovery, in one of the most remote regions of the Pacific Ocean, completely oblivious. When the Twin Towers fell, once again, we had no idea. At that time, we were sailing between Gambier Islands and Pitcairn Island, a region Outside magazine described as one of the 25 hardest-to-reach places on Earth. Take a moment to let that sink in. We live in a world of nearly 7 billion people where information can reach every country in mere

milliseconds, and two of the most historic events of the last decade went down without us even knowing.

The painful lesson we all learned from both of these events was that numbers often obscure the truth. Statistically, a terrorist attack on U.S. soil was impossible. Lehman Brothers’ balance sheet was “sound.” At first glance, even investing with Bernie Madoff seemed like a good play. However, we now know a serene surface often obscures a sea of sharks. Looks can be deceiving Here’s an example of some of the numbers we’ve compiled on The Best Odyssey, an expedition whose mission is to find and ride the most remote, idyllic kiteboarding locales on earth. We’ve covered nearly 45,000 miles under sail; traversed three oceans: the Atlantic, Pacific and Indian; visited 42 countries; documented

more than 100 virgin locations; had 30 professional riders on board; swam with innumerable whales, manta rays and sharks; caught hundreds of pounds of tuna; the list goes on. Sounds pretty good, right? Well, these figures don’t tell the whole story. On the surface, my partner Jody MacDonald and I have great jobs. While some would miss not being tapped into the daily news and be horrified at the prospect of not knowing when major world events take place, I think the majority of kiters are like us and relish the thought of having very little to worry about beyond the coming and going of the wind, the rise and fall of the sun. On some days, life at sea really is that peaceful and simple. But seeking bliss on a commercial sailing operation exacts a toll on the mind and body

Clockwise from far left: The chef prepares sashimi for the crew. McClurg survives a close call. One of many virgin kiteboarding locations discovered during The Best Odyssey.

The hidden costs While our gig might look like a dream come true on the outside, the reality of life at sea is much different. Yet, when I try to explain this, people still tell me I have the best job in the world. So I’ve compiled the following examples to help enlighten those who don’t have the full picture of just how high the price of discovery can be. But don’t get me wrong; despite the steep cost of admission, this is one ticket I’ll happily pay for again and again. On the rocks Just two months after the start of the expedition, I nearly ended it all after a series of small but serious mistakes put us on a reef while sailing at full speed off Anegada Island in the Caribbean. That night my mind was on other matters. Jody and I incurred serious debt to get the expedition off the ground, and I hadn’t had proper sleep in months — I was a walking zombie. Luckily, an emergency haul-out in Tortola and a relatively cheap repair ($5,000) had us back in the water without delay. My ego, however, took a well-deserved clobbering. The mistake was a sobering reminder that there’s absolutely no excuse for a captain to have a lapse in judgment, regardless of the circumstances. Deep doo-doo In Cartagena, Colombia, we anchored in the foulest body of water I’ve ever seen. Millions of tons of raw sewage run into the bay at the foot of the city every day, and the water is black as night. Here I took a misstep in our dinghy and fell into the water while holding our backup outboard. I was forced to don a snorkel, mask and fins and free-dive 40 feet through this fecal soup to reach the engine. There, I tied a line to the motor, barely visible in the muck, and hauled it back to the surface, completely flooded with sewage and salt water. Drunken sailor The following year in Tonga, halfway through an otherwise incredible trip, our first mate woke me. She was distraught, crying uncontrollably, and told me she needed help. Her boyfriend, our chef, was being restrained by three very large Polynesians on

few can imagine. First, there’s the reality of space. Our year-round home is just 57 feet long and 30 feet wide. And we share these sometimesheaving living quarters with an average of six guests and two crew members for more than 200 days each year. “Alone time” doesn’t exist. My day has no beginning and no end. I haven’t been home for Christmas in more than 10 years and haven’t had a single day off in nearly a year. While we do have some time in port, time between trips is always a mad dash of cleaning, provisioning, maintenance and administration. Dealing with immigration, permits, customs and general bureaucracy alone robs us of thousands of dollars and untold hours. Plus, if the generator, engine, watermaker or any other critical part fails, we don’t have the luxury of heading

back to port for repairs. We operate almost exclusively where no other boats travel, places where no such facilities exist. Even worse are the physical maladies. Not only does Jody suffer debilitating seasickness, but we both have endured plagues of parasites and infections due to traveling through third-world tropical countries. These conditions are made worse due to our weak immune systems, a byproduct of consistent lack of sleep and rest, along with the enormous stress we undergo to keep this machine running smoothly on a daily basis. She and I have played host to resistant and repeated staph infections. In the last year alone, Jody suffered through typhoid in Indonesia, E. coli and giardiasis in India and an unidentified intestinal parasite in Madagascar that landed her in the hospital for the third time in as many months.

we've endured plagues of parasites and infections due to travel in thirdworld tropical countries. the beach. He’d had way too much to drink and became violent, threatening anyone within earshot, especially his girlfriend — and this was not the first time. I fired him on the spot, losing not only a good friend but a very talented and capable chef. Wipeout A few months later, while kiting the most amazing wave we’d found so far on our expedition in the Marshall Islands with Pete Cabrinha, Kristin Boese, Mauricio Abreu and Moehau Goold, my kite went down and I took a serious beating. The result was a blown-out eardrum, one in a long list of injuries I’ve sustained at sea. Two days later, when an infection took hold, the pain became unbearable. Despite gobbling every painkiller I could lay my hands on, nothing could abate the sensation that someone was boring into my head with a power drill. It would be more than a month before I could get in the water again. Bad advice Following a day spent surfing and kiting the infamous P-Pass in Pohnpei last year, a group of local surfers invited us to a beach barbecue. They insisted we anchor in a spot I deemed totally

unsuitable, taking into consideration all of the potential things that could go wrong. Quelled by peer pressure and the group’s repeated assurance the spot was safe, I eventually relented. I anchored the boat off the beach and joined our guests and crew for the evening’s festivities. Just after midnight, we returned to find the boat high and dry, sitting lopsided on top of the reef. I cursed myself over and over again for the unforgivable breach in common sense as we waited for the tide to release us from our temporary prison. The next day, we inspected the boat. Thankfully, no damage was sustained.

Clockwise from top left: Discovery gets an expensive repair. Cameron Dietrich scores a hollow right. Discovery avoids a gameending tanker. McClurg shows off the stitches between his toes.

Perilous petrol Later in the year, we found ourselves off the south side of Sumba, Indonesia, for a month with the singular focus of finding new waves. We were victorious in our hunt, but our victory was hard-fought. Just fueling the boat required transporting jerry cans by dinghy through a hefty shore break across a long beach, then making a six-hour drive on a dirt road that would be difficult to walk on, let alone negotiate by car. Then we had to do it all over again on the way back. It was an extremely unpleasant, allday affair that we had to undertake twice between every trip.

Exile on Main Street This year while on a multiweek expedition in the Maldives, Discovery’s sail drive (transmission) on the port engine blew a clutch. Driving an oversize catamaran with one engine is like driving an 18-wheeler in Manhattan with no reverse, except a mistake means we hit a reef and lose everything, instead of getting a traffic ticket. To get the needed parts, we had to fly someone in from Europe and another person from the States, as shipping might involve customs delays we couldn’t afford. Once the parts arrived, it was too hot in the torrid equatorial sun to carry out the repairs in the daytime, so with clients on board, we lifted the engine and completed the repairs at night. At the same time, the agent in charge of our immigration and customs clearance disappeared to Sri Lanka and took all of our paperwork with him. For a week, I battled the authorities and made every plea I could muster — including a flight to the capital, Male, to meet with the head of immigration — to get clearance. In the end, the delays and repairs ran well over $10,000 and left me a nervous wreck.

with the singular focus of finding new waves, we were victorious, but our victory was hardfought.

Indonesian rush hour In Bali, Indonesia, on the eve of our departure for Malaysia, where we planned a major refit to the boat, I found myself without a crew and had no time to arrange temporary replacements. This created the most daunting challenge I’ve ever faced at sea. I had to cross two of the busiest shipping routes on earth, which happen to straddle the equator, a band of latitude notorious for rancid weather. For 10 days, I didn’t sleep more than a few minutes at a time. The autopilot was on the fritz and could not be trusted, so I frequently veered off course. A nasty staph infection took hold in my left leg, and in the Java Sea, a succession of violent squalls battered us unabated for nearly three days. The radar proved useless: Visibility in the torrential rain was less than 25 feet. Near-constant thunder and lightning cracked with shuddering intensity, fraying my nerves to a point where I literally shook in fear. In fact, it’s the most scared I’ve ever been at sea, and the seas were relatively calm. In the Malacca Straits north of Singapore, similar weather caused a near-collision with a huge cargo ship. Beyond that, there were at least two dozen freighters and tankers in close proximity traveling at 25 knots, and we were invisible to one another. It’s like being a snail on a six-lane freeway at night during rush hour. Incredibly, I managed to get through the ordeal unscathed.

Epic tribulation...and epic trials when a choice is made to sail around the world...for 13 years straight!

Epic tribulation...and epic trials when a choice is made to sail around the world...for 13 years straight!