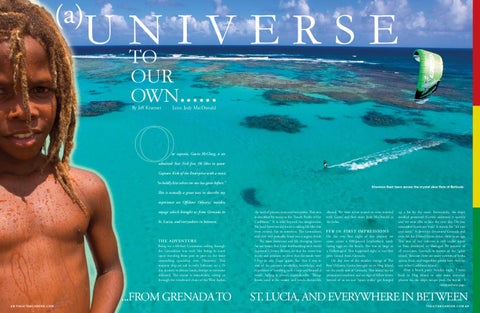 ur captain, Gavin McClurg, is an admitted Star Trek fan. He likes to quote Captain Kirk of the Enterprise with a twist, “to boldly kite where no one has gone before.”

Shannon Best tears across the crystal clear flats of Barbuda.

This is actually a great way to describe my experience on Offshore Odysseys’ maiden voyage which brought us from Grenada to St. Lucia, and everywhere in between.

THE ADVENTURE Being on a 60-foot Catamaran sailing through the Grenadines was truly like being in outer space traveling from port to port on the most astonishing spaceship ever, Discovery. This majestic ship set sail in early February on a 15day journey to distant lands, foreign to everyone onboard. The course is remarkable, taking us through the windward chain of the West Indies,

the land of pirates, rum and free spirits. This area is described by many as the “South Pacific of the Caribbean.” It is wild beyond the imagination. No land farers would know a sailing life like this even existed. Say to someone, The Grenadines, and they will probably hand you a sugary drink. The most dominant and life changing factor for me wasn’t that I was kiteboarding with world superstar Clinton Bolton, or that the water was warm and pristine, or even that the meals were 5-Star in any Zagat guide; but that I was in awe of the captain’s sensibility, knowledge, and experience of handling such a large and beautiful vessel. Sailing is always unpredictable. Things break, sand is the enemy and winds dictate life

aboard. We were never scared or even worried with Gavin and first mate Jody McDonald at the helm.

FEB 10: FIRST IMPRESSIONS On the very first night of this journey we came across a 500-pound Leatherback turtle laying eggs on the beach. She was as large as a Volkswagen! This happened right at our first port, Grand Anse, Grenada. On day two of the maiden voyage of The Best Odyssey, Gavin brought us to Hog Island, on the south side of Grenada. This island has no permanent residents and no sign of fellow kiters. Several of us on our “space walks” got banged

up a bit by the coral. Fortunately, the ship’s medical personnel (Gavin) addressed it quickly and we were able to kite the next day. Do you remember hurricane Ivan? It stands for “it’s vast and nasty.” A direct hit devastated Grenada and even hit the United States twice, three years ago. This area of our universe is still under repair as Ivan destroyed or damaged 90 percent of all structures. Grenada is known as the “spice island,” because there are more varieties of herbs, spices, fruit, and vegetables grown here than on any other Caribbean island. After a beach party Sunday night, I went back to Hog Island to take some starscape photos via the ship’s escape pod, the kayak. I continued next page.

ST. LUCIA, AND EVERYWHERE IN BETWEEN thekiteboarder.com 69

Chilling out after long days of exploring new places are often the most memorable moments of a trip like this.

a massive amount of bioluminescence in the water. I have seen it before in other parts of the world, but this was absolutely unreal! I called back to Discovery on the two-way to let them in on my secret. Everyone was up for hours playing in the brilliant, greenly illuminated water.

FEB 13: MOVING ON Day three we took an automotive transporter on the island in search of the best beach and the strongest wind to kite while Gavin and our chef, Trisha, sailed Discovery up the leeward side. Nationalism is contagious on Grenada and it shows. Many of the island’s population are descendants of African slaves who were brought over by European settlers so every sign, bridge and roadway is painted fully in the colors of that nation -- red for blood, gold for the sun and green for the earth. We toured the windward side of Grenada and finally landed in a spot called Sugarloaf Island. This was our first wide expanse of a Caribbean beach with white sand and crystal clear waters. As the ship’s videographer, I wanted to go up the mast to do some shooting. Twenty feet up, a splice in the halyard (the line holding me up) broke and I was suddenly faced with a dizzying drop. Everyone watching shrieked, but luckily I grabbed onto the lazy jacks tightly and was able to climb down. I wanted to try it again when we reached the Tobago Cays, a group of five tiny, uninhabited islands just north of our starting point. Instead, I climbed to the top of Petit Beteau, one of the teeny islands, a much safer alternative. Day four we anchored off the south end of Carriacou, near Saline Island. It was perfect for diving, snorkeling and more importantly for us, kiteboarding. We woke up to 27 knots with some perfectly protected flat water. Clinton boosted repeatedly over both the dingy and stern of Discovery, much to the delight of those onboard. I never imagined I would kite in such a paradise. Our schedule dictated we stay on the move, so from Saline we sailed an easy distance north to Mopion, which is a tiny “motu,” Polynesian for a small island. We found soft sand, a lone palapa and nothing else. This was our lunar landing, a tiny isolated spot devoid of life other than our own. We claimed it for ourselves and sent three spacewalkers out to kite under a spectacular sunset. continued on page 74.

Clinton Bolton jumped on board and ended up staying for three weeks.

STOP ON OUR JOURNEY.”

FEB 19: HIDDEN TREASURE Canouan was a pinnacle stop on our journey. This magic and permission to board the island was island is unspoiled and virtually undiscovered. granted! Frequenting celebrities include Princess We came ashore in our Zodiac and were quickly Margaret, Bill Gates, Mick Jagger, Johnny surrounded by locals competing for our attention Depp, Kate Moss, David Bowie, Bryan Adams (fine print – money). I was invited right away by – you get the picture. If you are accepted, the “Bobby Shawn” to come and have dinner with his minimum nightly fee at the Firefly Hotel is family, for a price of course! I never got his real $1000 US. No cell phones, babies or cameras name, but his mother Viola King cooked some of are allowed in the common areas. We got the the finest Caribbean food I’ve ever tasted. It was evil eye from the concierge and were prompted just chicken, but it was delicious. to leave. No problem, as the Discovery cabins We traveled up the windward side of Canouan are large doubles complete with oversized heads and fell in love with Carenage Bay. Discovery was (shower/restroom), DVDs, flat screens, and air anchored all alone in less than six feet of crystal conditioning; along with a huge amount of clear water protected by a barrier reef, providing storage and cabinet space. killer waves for those inclined and butter flat water on the inside. We were all up and rigged by 7am; FEB 23: FINAL DAYS the sky a kaleidoscope of Slingshot and Best kites. We headed northward and Clinton got in a very Alas, our good fortune was cut short as the Trump sketchy session over a shallow reef near Bequia, resort kindly insisted that we depart at the end of too scary for any of us mortals to attempt. We the day, wary of a lawsuit. Apparently, a kiter had then embarked on our longest sail past St. Vincent mangled himself on the reef some weeks earlier. all the way to St. Lucia. Gavin and I were the only ones on deck as we sailed through the night. FEB 22: ON TO MUSTIQUE I was up because I wanted to learn more about Mustique is an enchanting, exclusive island. the sailing life. But Gavin was more accustomed Although the island is part of St. Vincent and to these night sails, and I couldn’t keep my eyes the Grenadines, it is wholly private. Through open past 1am so I decided to adjourn to my some finagling, our trusty captain worked his rocking bed. I left Gavin to sail on his own until

Living off the land and sea is not as bad as it sounds on the Discovery.

Jody’s watch around 3am. Next thing I knew it was daybreak, and we were in St. Lucia; not far from Anse de Sable kiteboarding beach. What a remarkable beach – with miles of white sand, side-on wind, and many local kiters to help launch and land. The first day there wasn’t great wind, but the next morning it was blowing 20 knots. Clinton and I rigged as the others had already departed. He was performing aerial tricks right off the beach and blowing away all the lookie-loos and even the local pros. I regret that I didn’t film any of this, but I sure had a great time on the water! Jody finally had to pull me off and get me packing to take me to the other side of the island where I was to catch my flight home – a reality I’d been trying to avoid. I found terra firma strange beneath my feet and one last look at Discovery left me already anticipating our next mission to exotic lands and wilder escapes.

Jeff Kraemer is the owner of Eclipsefilms. com and is producing a video of his adventure. To follow more of the places and people involved in the Best Odyssey, see www.offshoreodysseys.com

Professional land boarder Alex Brown hopped on board for a week of R & R.

A Universe to our own

The first voyage of the SV Discovery on their 5 year expedition in the Grenadines.

A Universe to our own

The first voyage of the SV Discovery on their 5 year expedition in the Grenadines.