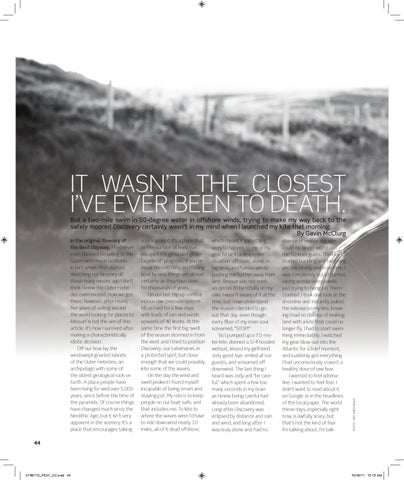 IT WASN’T THE CLOSEST I’VE EVER BEEN TO DEATH. In the original itinerary of the Best Odyssey, I had never even planned on sailing to the Outer Hebrides in Scotland. In fact when I first started sketching our itinerary all those many moons ago I don’t think I knew the Outer Hebrides even existed. How we got there, however, after nearly five years of sailing around the world looking for places to kitesurf is not the aim of this article. It’s how I survived after making a characteristically idiotic decision. Off our bow lay the windswept gnarled islands of the Outer Hebrides, an archipelago with some of the oldest geological rock on Earth. A place people have been living for well over 5,000 years, since before the time of the pyramids. Of course things have changed much since the Neolithic Age, but it isn’t very apparent in the scenery. It’s a place that encourages taking

a look around. It’s a place that on the surface at least has escaped the gloss and glitter façade of “progress.” If you remove the odd ferry and fishing boat by sea, things are almost certainly as they have been for thousands of years. On our last trip up north a vicious low-pressure system hit us hard for a few days with loads of rain and winds upwards of 40 knots. At the same time the first big swell of the season stormed in from the west and I tried to position Discovery, our catamaran, in a protected spot, but close enough that we could possibly kite some of the waves. On the day the wind and swell peaked I found myself incapable of being smart and staying put. My role is to keep people on our boat safe, and that includes me. To kite to where the waves were I’d have to ride downwind nearly 10 miles, all of it dead offshore,

which meant if something were to happen to me or my gear I’d be in a desperate situation: offshore, alone, in big seas, and furious winds pushing me further away from land. Rescue was not even an option. I’d be totally on my own. I wasn’t aware of it at the time, but I now understand the reason I decided to go out that day, even though every fiber of my inner soul screamed, “STOP!” So I pumped up a 7.5-meter kite, donned a 5/4 hooded wetsuit, kissed my girlfriend Jody good-bye, smiled at our guests, and screamed off downwind. The last thing I heard was Jody yell “be careful,” which spent a few too many seconds in my brain as I knew being careful had already been abandoned. Long after Discovery was eclipsed by distance and rain and wind, and long after I was truly alone and had no

chance of rescue, my kite could no longer withstand the 50-knot gusts. The kite started buckling and twitching uncontrollably and in no time I was completely out of control, racing across steep swells just trying to hang on. Then I crashed. I took one look at the shoreline and instantly pulled the release on my kite, knowing I had no chance of making land with a kite that could no longer fly. I had to start swimming immediately. I watched my gear blow out into the Atlantic for a brief moment, and suddenly got everything I had unconsciously craved: a healthy dose of raw fear. I wanted to feel adrenaline. I wanted to feel fear. I didn’t want to read about it on Google or in the headlines of the local paper. The world these days, especially right now, is awfully scary, but that’s not the kind of fear I’m talking about. I’m talk-

But a two-mile swim in 50-degree water in offshore winds, trying to make my way back to the safely moored Discovery certainly wasn’t in my mind when I launched my kite that morning. By Gavin McClurg

ing about raw fear, doing something that is probably beyond your limits. But for many days I hadn’t been able to paraglide, hadn’t been able to kite, hadn’t been able to surf. Calmer people, more together, grounded people don’t go crazy like I do. They read books, they play games, they find companionship, they surf the Internet. I unwisely chose none of these. I chose the Atlantic, the frigid Atlantic. The wind was 40 knots or more right in my face. The seas were a mess of steep, short duration waves that hammered down relentlessly. I took a breath and began to swim, taking it easy knowing that if I got a cramp I was a goner. Don’t panic. After 30 minutes I couldn’t tell if I was making any progress, the shoreline was still a tiny glimmer on my unsteady horizon. Just keep swimming, stay positive, curse yourself

for being so stupid, don’t think about sharks that are most definitely below. After an hour I thought the land was closer, but I still wasn’t sure. Just keep swimming. I tried to quiet my brain from another increasingly insistent subliminal scream. My crew would be getting worried by now, even panicked. This was no place, however, to attempt a rescue. I was a literal needle in a haystack and coming to look for me would only put more people in serious danger. Just keep swimming. I don’t know how long I was out there, but eventually I could make out that land was indeed getting closer. Sometime late in the afternoon my feet touched sand and I stood thigh deep in a glorious windswept bay that seemed more beautiful than anything I’ve ever seen before. I didn’t have long to rest. I made it back to Discovery five hours

later. Much of that time was spent swimming across more open bodies of water, and much was spent on land in a sandstorm just trying to find my way back. I walked for miles across terrain that gets battered by so much wind trees cannot grow. Visibility was almost zero, making navigation nearly impossible. I kept thinking I’d see Discovery over the next horizon, but again and again she refused to appear. My shoulders and arms ached from the strain of holding onto my surfboard which kept turning into a kite. And while my lungs burned and my legs ached and my eyes watered, through most of it I know I was smiling. Finally I stumbled onto a beach and saw the boat, anchored peacefully where I’d left her. I was picked up in due course by our first mate who just nodded his head. There was no need to ask what

had happened to my kite. As I stepped onto the stern of Discovery, everyone met me with a huge smile, no doubt a mirror of my own. It was the smile of relief. You remember these days. These are the experiences that shape a person’s life. These are the times when time slows way, way down. Everything gets sharp. Everything is in focus. There are no distractions, there is nothing else going on at the periphery. The moment is pure and unfiltered. These moments are an athlete’s drug of choice. I now know I went out that day seeking this drug. It’s a drug many kiteboarders have dallied with either on purpose or through a series of unplanned or uncontrollable events. Healthier than heroin or cocaine for sure, but the end result is sometimes unfortunately the same. Sometimes we dally a bit too far.

Slow Living in an Ancient World

The author finds himself in a tight position in a storm off the coast of the Outer Hebrides, Scotland.

Slow Living in an Ancient World

The author finds himself in a tight position in a storm off the coast of the Outer Hebrides, Scotland.