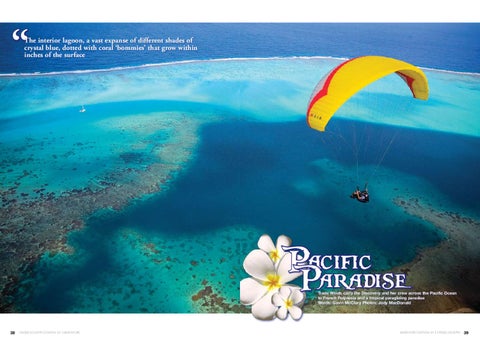 The interior lagoon, a vast expanse of different shades of crystal blue, dotted with coral ‘bommies’ that grow within inches of the surface

Trade Winds carry the Discovery and her crew across the Pacific Ocean to French Polynesia and a tropical paragliding paradise Words: Gavin McClurg Photos: Jody MacDonald

I hate to use the oft-abused cliché ‘it was the best day of my life’, but in this case it really was

n the sixteenth day, the bottomless blue sea offered the first obstructed horizon we’d seen since leaving the Galapagos. Dim green shapes loom like bubbling volcanoes, growing with each passing mile. We’d reached the Gambiers, widely regarded as the most remote corner of the Pacific Ocean. When most people conjure thoughts of French Polynesia, images of Bora-Bora and Tahiti dominate their conscious. A small community of cruising boats and only the most dedicated and adventurous land-goers ever visit her seemingly boundless other jewels, from the 1,600 km (1,000 mile) stretch of atolls known as the Tuamotus, or ‘Dangerous Archipelago’, to the mountainous and striking Australs, to the jungle-clad and steep Marquesas which Gauguin painstakingly tried to capture on canvas until his death. This would be my second trip. The last time was right before 9/11 when I barely knew what paragliding was. Then I met a girl who flew, and the rest of course is…history. That girl, Jody MacDonald, and I are now operating a kiteboarding expedition called The Best Odyssey, a five year fling around the world on a 17 m (57 foot) catamaran in search of the best places to kiteboard, surf and paraglide, as we’re both pilots and both addicted to flying. We’re so addicted we even have a tow winch on board, and many of our owners (the expedition operates as a time share) have become pilots themselves. We cleared customs on the morning after our

arrival and took a look around. The town hadn’t changed a bit in eight years; in fact I found my friend Hervé, the town’s only doctor, standing outside the medical clinic and incredibly he remembers me as well. Last time we came through he was the only one on the island who had internet (and he insisted he was the only one who even knew what it was). These days I guess a few others have been sucked into the World Wide Web, but the town was as precious as I remembered. Manicured gardens and quaint but very basic houses line the only road which leads to the base of Mont Duff, the highest point in the archipelago, some 440 metres above sea level. As I spoke to Hervé I couldn’t help my eyes from rudely leaving his face to look up. A steady onshore breeze was lapping at the mountain, the whole SE face shaped perfectly for dynamic flying. Finally I blurted out: “Hervé, has anyone ever flown here?” Turns out Hervé used to be a pilot, flying in Tahiti and Raiatea in his younger days, islands 1,600 km to the WNW. He assured me no one had ever flown in the Gambiers, but he thought it was possible. The next morning I hiked up a mostly hidden, very steep trail and reached the summit by 8:30. The winds were already too strong to fly and with a sheer cliff wall plunging all the way to the reef on the backside, not penetrating could have only one outcome. I used the time to stomp out a makeshift launch in some waist-high grass and settled in to

see if the winds would back off. Eight hours and about 1,000 subconscious battles in my head later – “I think its OK now, no it isn’t you idiot, just wait a bit longer” - with sunset just two hours distant, I launched. As soon as I left the ground my wing and I went straight up. I hammered the speed bar, jumped on Big Ears, shifted weight back and forth, and thankfully began penetrating. Once clear of the hill my heartbeat returned to normal allowing for a look around. I had a 360 degree view of the five main islands, all encircled by a thin strip of barrier reef. The interior lagoon a vast expanse of different shades of crystal blue, dotted with coral ‘bommies’ that grow within inches of the surface. There wasn’t a blip of dirty air. if I wanted to go down I simply flew out over the water. To go up, return to the hill and take the elevator. I couldn’t help soaring out over our boat, the Discovery, and pulling a few SATs in an attempt to impress the growing number of locals who were gathering in the soccer field where I finally landed some two hours after launch. The population of the town is 700 and I’m not exaggerating when I say that almost every one of them assembled in the landing, cheering and clapping as I came in. Dozens of kids ran around, giddy, firing off question after question that I couldn’t answer except to smile and nod as my French is wholly inadequate. If this was the kind of flying we could expect in Polynesia, this was going to be quite a journey. I hate to use the oft-abused cliché

‘it was the best day of my life’, but in this case it really was. We did indeed get a few days of phenomenal flying in Tahiti some months later after traversing the entire Tuamotu chain, where there is an active club and a few flying sites that work well yearround. As Tahiti soars to 2,241m (7,352 ft), with active thermals, the flying is serious for those who wish to attempt XC or for those who wish to play in the clouds. In one week, two experienced solo pilots and one tandem ditched in the trees. But our itinerary only allowed for a week in Tahiti, sparse time to really explore the potential. Huahine is the most rural and laid-back of the Society Islands, the group that is better known for Bora-Bora, Tahiti and Moorea. The pilots in Tahiti said there was an active flying club on Huahine who would be only too happy to receive a few flying guests. The ‘Flying Toasters’ turned out to be two people, Xavier and Gilles. They take turns each year rotating from the President to the Vice President of the Club (one of their wives, a non-pilot, is the secretary and treasurer!). On arrival one Sunday morning I emailed Xavier and asked if he thought we could fly. He replied, in broken English, “I think today it is too strong, and I am with my family…is

Sunday…I will be there in five minutes.” Xavier explained to us that Gilles had suffered a leg injury and hadn’t flown in two years, so he was now the only pilot on the island. On this particular trip we had four pilots on board- Jody and I and two clients, Brian and Bruce. Without so much as a word Xavier took one look at us with our wings on our backs, smiled and started literally running to the launch, a small patch of grass only 200 metres up a gently sloping ridge that disappeared into the clouds toward the centre of the island. His enthusiasm was infectious. We wasted no time in pursuit. Launching here is a delicate affair. Directly below launch are a string of power lines, then a smidgin of soccer field (the landing), then the lagoon. You have to boot-top coconut trees and find lift quickly, or bail out and make the landing. Deciding when to bail is critical: a wrong move and you’re in the power lines or in the trees. Four out of five of us got up. Brian sunk out, but ran back up the hill and tried again, this time making it. Flying laminar sea breeze air is hard to describe. It feels almost like cheating. It’s the opposite of thermal flying, there’s no ‘gotta get up’ stress over the ocean. The lift can almost be seen, and certainly felt, and it’s as soft as a silk sheet. Those who felt

inclined could ride the lift up high over the green hills then soar out over the lagoon, practice their acro then fly back to the hill and do it all over again. For others, boating around in peace was the only rush required. Bruce flew over my wing and settled his feet on my canopy for a moment and we both howled in laughter. We may not be the Rodriguez brothers, but we felt like Gods. Over the coming weeks we’d return again and again to Huahine to fly with Xavier. We racked up hours over the lagoon, each time discovering some new vista that took our breath away. Every time, Discovery was the only boat at anchor below us and we were the only occupants of the air other than the resident sea birds and insects. On our final trip we returned for one last attempt and found a local farmer’s waste fire had got out of control and ripped through launch. By some stroke of luck a patch of grass remained that was the exact size of a laid-out wing. A screw up now meant a charcoaled wing and a lot of embarrassment, which only amplified the need for a perfect take-off. Jody and I launched without incident and manoeuvred above the forest fire which was now raging behind launch, ripping at times through the forest canopy directly below. I flew my

Zulu as close as I dared, watching the smoke and ashes ascend far faster than I could, the heat from the fire hitting me in great bursts and I wondered how smart this could be. Jody thankfully waved me off. She had the picture she wanted. We glided effortlessly one last time over the lagoon. I SATed to the ground and landed again amongst the many local children whom we’d befriended not by words, but by the beauty of their smiles and curiosity and our own love of the air which they can clearly sense. As always they asked me if we were coming tomorrow to fly so they could come and watch, but sadly this was our last day. If we could have stayed forever we would have, but the blue horizon called.

Gavin McClurg is the Captain of Discovery. He and Jody MacDonald operate a world expedition called The Best Odyssey. To find out more, and to see more photos and videos of this story, please visit www.offshoreodysseys.com To find out more about the flying in Polynesia visit: Tahiti: www.airevasion-tahiti.com Huahine: flyingtoaster.ovh.org

crystal blue, dotted with coral ‘bommies’ that grow within inches of the surface to French Polynesia and a tropical paragliding paradise Wor...

crystal blue, dotted with coral ‘bommies’ that grow within inches of the surface to French Polynesia and a tropical paragliding paradise Wor...