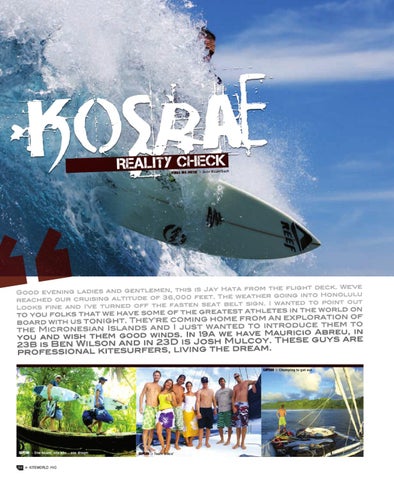 is Jay Hata from the flight deck. We've Good evening ladies and gentlemen, this feet. The weather going into Honolulu reached our cruising altitude of 36,000 en seat belt sign. I wanted to point out Looks fine and I've turned off the fast world on

atest athletes in the to you folks that we have some of the gre home from an exploration of board with us tonight. They're coming oduce them to

ted to intr the Micronesian Islands and I just wan have Mauricio Abreu, in we 19A In s. wind you and wish them good Mulcoy. These guys are 23B is Ben Wilson and in 23D is Josh am.

Caption > Chomping to get out

Caption > One board, one kite... one dream

ho is this pilot? And couldn't we find someone sober to fly this thing? I was amazed, but the pilot had recognised Ben as we got on board. Captain Hata was a kiter too, from Kauai. He hung around our seats and talked story while the other passengers got settled, asking questions about where we'd gone and what we'd found. He told us he'd flown Kelly Slater and Andy Irons in and out a few weeks back for a swell and, I suspect, he probably made a similar PA announcement. The thought that we also merit such treatment made me laugh. The disparity between Kelly or Andy's world and ours seemed just too great: their market and ours, their contracts and ours, their bank accounts and ours. Yet strangely, at least one person on board knew what we were about, and that made me think. We drank the complimentary beers that soon appeared and I couldn't help but ponder the whole progression of kiteboarding - from hair-brained idea to professional sport. Huddled under the canvas onboard Discovery, weathering an unfair amount of rain over the previous two weeks, our crew had plenty of chance to talk about what 'we as a sport' were doing, what we were doing wrong - more likely. How the sport should be portrayed. What the magazines were doing well, and horribly. What moves were gay, and the like. It was quite a long, soggy self-critique. I learned that even certain pieces of equipment needed to be shunned. Evidently the worst danger to kitesurfing's future: innocent foot straps - or as they came to be known 'foot-handles', or

even worse, 'fruit loops' - took hours of abuse. I listened to some big voices in the sport as they explained the dire evils of being attached to your board. (To me foot straps are philosophically no different from wax. I just kept quiet.) The thing was, the motivation for all this talking was clearly the fear that the sport wasn't growing fast enough; that it didn't match some presupposed trajectory. The surprise here was not that something was being perceived as bad for the sport, but that we were actually looking for something. You see, I go back to the days when surfers were doing these exact kinds of trips finding new spots, but squeaking by on little support, travelling with little cushion or security back home, questioning our choice of 'career' constantly and endlessly rationalising that our lifestyle (riding waves) outweighed the need to regularly pay our bills. It wasn't really that long ago - less than thirty years. It's easy to remember when surfers were building surf wear companies, not the other way around. Telling someone you were a surfer 'for a living' would inevitably lead to being brushed off as a dreamer or drug addict. Now, of course, everyone in the world needs Quika-bong shoes, shorts, hats and sunglasses. So the laments of my current companions, that kitesurfing was being held back by foot handles, or bridles, or advertising, largely bounced off my 96

Caption > Steady and solid... and that was just the waves. Mauricio pulled out a few nice moves, too

ing Caption > To stop scar keeps his glasses on

Caption > She needs a rescue

weathered perspective. But what of this concern? We as surfers never gave a crap if the sport grew. We didn't fear that using traction pads might make us all homosexuals, or if 'other sports' thought we weren't core. Kiting's insecurity had started to wear on me. Our plan had been to hit Pohnpei, the home of perhaps the world's greatest right hand wave, 'P-Pass'. This break has dominated the surf media over the last several years achieving iconic status. It has become like Pipeline or Teahupoo and people spend mountains of money and long hours to get to it. It's a magic set-up, the wave being a true wonder of nature. Fortunately we had a back road in; the sailing vessel Discovery. We wouldn't need to book in at the camp. We didn't need to share the little Ponga boats that ferry the two-hundred-dollar-a-day guests in and out to the reef. And we would embrace the ever-present wind. But, we realised that we would have to share the wave, eight of us, with who knows how many of them. And we could only be out of sight until the time came to drop in. Then our needs and the surfers' would necessarily intersect and the prospect of getting any love or co-operation from the high-paying WWW.KITEWORLDMAG.COM > 97

surf-campers was very, very low. Particularly when they've stumped up big money and gone to the ends of the earth for the ultimate surf fix, surfers don't want to find parasites like kiters infesting 'their' line-up. Just days before our trip the idea arose to go explore a nearby island instead. When that email came in, my heart sank. I've been trying to go to P-pass for several years. Yet after consideration of the above, I too voted for a somewhat risky exploration over a certain conflict with pro surfers on a mission. And heck, what's three hundred miles after all? Couldn't there be another P-Pass just one island over? Why not go somewhere new and see what we find? Ben Wilson has been to P-Pass several times and, on better weather forecasts than we were seeing now, so he was okay with changing. Mauricio is happy anywhere and I don't believe he even weighed in. Josh Mulcoy may have been the one who was most sceptical. As a pro surfer he knew full well the gravity of the call we were making by passing on P-Pass. But Josh loves Discovery and her crew after our trip to Tahiti and put faith in the jpegs Gavin had Caption > Josh

Caption > Ben in the line of fire

sent from his kite sessions in between trips. We were all in. So with a few more tasty images attached, Gavin McClurg, leader of the Best Odyssey, sent out an email that we were changing course. Had we been top-dollar pro surfers, sponsors would have flipped out. Editors would have been devastated. We would have had some real explaining to do. And there was my revelation. We kiters still haven't managed to sell out. We're small (too small if you agree with the status quo), but that to me meant our sport was still pure. Our images hadn't become marketing tools, our lifestyles sold to the

masses. Our decisions were ours, our search was still untainted. Often perspective is easier to find in reverse. We couldn't see how good we have it. As we pulled up to the mooring ball at the end of a bowling right, perhaps the truth of how lucky we were slipped by us. Yes, the rain was falling, but no ad agency was holding its breath for the photos. No one was going to freak out if we didn't score. No one back at corporate was pissed. So we surfed. And we surfed. The waves were deep blue 85 degree lumps that reached the end of a tapering reef and stood up before bending around into the lagoon. It was a

sweet deal: the boat anchored in true Gavin fashion, directly at the end of the wave, chefs Soledad and Pia filled our stomachs with incredible food and there was no one but our crew in sight. By mid-afternoon the wind filled in. We changed gear and thoroughly enjoyed our small-time, slow-growing, borderline homophobic sport. Mauricio did huge backhand gouges, Josh floated some long sections and Benny Wilson hacked the crap out of every possible vertical face. After about two hours we were back on board Discovery once again abusing foot straps and magazine editors. A regular pattern that developed over the course of

the week. Days later as we left for the airport. Dragging our gear across a wet dock, I was still musing on the possibilities and our perceptions. The hard core strapless, unhooked guys all seem to believe the best we can ride waves is just exactly like surfers. The wake-style guys all want to do tricks just the way wakeboarders do. While it's good to refer to our roots, this underestimates what we're capable of, I think. We have the tools and the opportunity to learn from everyone before us and go far, far beyond. And anyone that doubts me should check back in about thirty years.

Caption > Ben 'hacking the crap out of it'

to you folks that we have some of the greatest athletes in the world on board with us tonight. They're coming home from an exploration of th...

to you folks that we have some of the greatest athletes in the world on board with us tonight. They're coming home from an exploration of th...