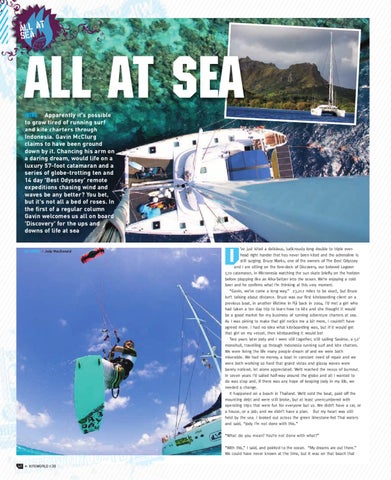 ALL AT SEA Intro > Apparently it's possible to grow tired of running surf and kite charters through Indonesia. Gavin McClurg claims to have been ground down by it. Chancing his arm on a daring dream, would life on a luxury 57-foot catamaran and a series of globe-trotting ten and 14 day 'Best Odyssey' remote expeditions chasing wind and waves be any better? You bet, but it's not all a bed of roses. In the first of a regular column Gavin welcomes us all on board 'Discovery' for the ups and downs of life at sea

’ve just kited a delicious, ludicrously long double to triple overhead right hander that has never been kited and the adrenaline is still surging. Bruce Marks, one of the owners of The Best Odyssey and I are sitting on the fore-deck of Discovery, our beloved Lagoon 570 catamaran, in Micronesia watching the sun skate briefly on the horizon before plopping like an Alka-Seltzer into the ocean. We’re enjoying a cold beer and he confirms what I’m thinking at this very moment. “Gavin, we’ve come a long way.” 23,212 miles to be exact, but Bruce isn’t talking about distance. Bruce was our first kiteboarding client on a previous boat, in another lifetime in Fiji back in 2004. I’d met a girl who had taken a ten day trip to learn how to kite and she thought it would be a good market for my business of running adventure charters at sea. As I was pining to make that girl notice me a bit more, I couldn’t have agreed more. I had no idea what kiteboarding was, but if it would get that girl on my vessel, then kiteboarding it would be! Two years later Jody and I were still together, still sailing Saoirse, a 52’ monohull, travelling up through Indonesia running surf and kite charters. We were living the life many people dream of and we were both miserable. We had no money, a boat in constant need of repair and we were both working so hard that grand vistas and glassy waves were barely noticed, let alone appreciated. We’d reached the nexus of burnout. In seven years I’d sailed half-way around the globe and all I wanted to do was stop and, if there was any hope of keeping Jody in my life, we needed a change. It happened on a beach in Thailand. We’d sold the boat, paid off the mounting debt and were still broke, but at least unencumbered with operating trips that were fun for everyone but us. We didn’t have a car, or a house, or a job; and we didn’t have a plan. But my heart was still held by the sea. I looked out across the green limestone-fed Thai waters and said, “Jody I’m not done with this.” “What do you mean? You’re not done with what?” “With this,” I said, and pointed to the ocean. “My dreams are out there.” We could have never known at the time, but it was on that beach that

ALL AT SEA The Best Odyssey was born. An idea began to form, which grew into basically this: 1) Buy a luxury blue-water catamaran big enough to comfortably house gear and guests. 2) Use other people’s money to do it. We’d design and be in control of everything - the itinerary; the people that joined; the finances; the crew, the vision. It was a concept completely contrary to business as usual. Instead of creating something we knew the market sought, we created exactly what we wanted then put it out there to see if anyone would go for it. Each year would consist of a series of globe-trotting ten and 14 day remote expeditions chasing wind and waves. But to get there required a year of sitting in front of a computer using what tiny funds we had to negotiate what seemed like endless obstacles. Website, contracts, offshore bank accounts and sponsorship - all things that I of course never learned in four years of business school, but had to be negotiated. And this is where the owners of the Odyssey come into the story. Imagine sitting behind a computer in Germany, Australia or South Africa and finding our website. It looks cool and exciting. But there is no boat. Only a dream, projected by two people you’ve never met. To buy into the dream you wire

a large sum of money to an offshore bank account - a deposit for a boat that will be purchased if enough people buy-in! Reasonable people would laugh and Google onward. And most people did. But we’ve learned some kiteboarders are like us. They are dreamers too. And luckily there were just enough of them to not only help us realise our dreams, but theirs, too. 20 DECEMBER, 2006 - SAN REMO ITALY I’ve just shattered a molar biting into a brie and caper-berry pizza. I’m jet-lagged so badly that I woke up last night at 11p.m. and got in the shower to prepare for my day of signing contracts and putting the final touches on purchasing Discovery thinking it was morning. I’ve been holed up in a miniature motel in Nice, France for a week doing little other than pacing back and forth and calling my bank. $600,000 has gone missing in the black hole world of international wire transfers, half of the money needed to make our purchase. If the cash doesn’t show today we won’t get the transaction done for a month as Italy goes off-line over Christmas. Our first trip of the expedition is on the books for 10th February in Grenada - a small island in the windward isles of the Caribbean some 5400

miles distant; a solid three week sail. I’ve never sailed a catamaran before. I have no tools, no spares, no bedding, no equipment in the galley and only two guys for crew. One has never sailed a day in his life. Long offshore passages typically take years to prepare for. We’ll have 12 hours. But only if the money materializes. Mysteriously it does. The bank offers some pathetic excuse but I don’t have time to complain. The deal is signed and sealed in the final minutes of the day, mere moments more and our first season would have been seriously jeopardised. At 0700 the next morning we take on diesel and put Discovery’s sails up for the first time. It’s blowing a brisk 35 knots and our course puts the wind at our back. Clear of the marina Discovery bolts forward so quickly I think something must be wrong. We scream along averaging 16 knots (nearly 32 kilometres per hour) in the first 24 hours, clobbering my best run on any previous boat by 60 miles. I can put a beer down and come back to it in ten minutes and it’s still sitting there. I’ll never sail a monohull again. We spend a year in the Caribbean, visiting a number of spots that have been ridden in places like St. Lucia and Martinique and also many virgin wonderlands, like Tortuga in Venezuela

and the San Blas in Panama. In a year we rack up nearly 70 kite locations and have over a dozen professional riders come aboard to teach us mortals their tricks. We slam into a reef near Anegada in the BVIs, a place any numb nut with a driver’s license can charter a boat and my ego is pummeled appropriately. I’d been running on emotional afterburners for months and wasn’t following normal protocol, a result of sleep deprivation and simple overconfidence. Luckily Discovery survives the stupidity and I am granted a relatively cheap lesson in awareness. I am responsible for the safety of our crew and guests and exhaustion is no excuse for poor decision making. Cruising does not get easier than in the Caribbean. Distances are short, provisions are found with ease and there are boats in nearly every protected harbor. It’s a perfect place to start the expedition; to warm up, to get to know the boat, to train the crew, to perfect our boat launches, to kite endless reefs and to prepare for all the wondrous places to come. I turn to Bruce and smile. He’s right; we have come a long way. And thankfully we’ve got a long way to go.

Drool over Gavin and his crews' voyages at: www.offshoreodysseys.com

“With this,” I said, and pointed to the ocean. “My dreams are out there.” We could have never known at the time, but it was on that beach th...

“With this,” I said, and pointed to the ocean. “My dreams are out there.” We could have never known at the time, but it was on that beach th...