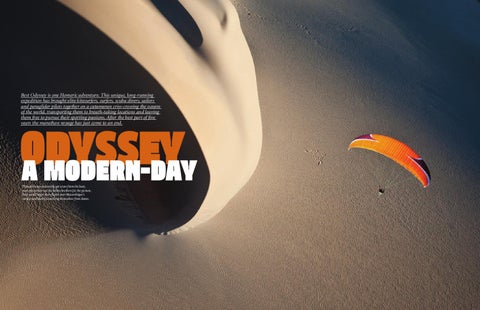 Best Odyssey is one Homeric adventure. This unique, long-running expedition has brought elite kitesurfers, surfers, scuba divers, sailors and paraglider pilots together on a catamaran criss-crossing the oceans of the world, transporting them to breath-taking locations and leaving them free to pursue their sporting passions. After the best part of five years the marathon voyage has just come to an end.

ODYSSEY A MODERN-DAY Though they occasionally got a tow from the boat, more often than not the Belbas brothers (in the picture, Stu) would begin their flights over Mozambiqueâ&#x20AC;&#x2122;s sandy coastline by launching themselves from dunes.

Text°°° SERGE GRETER Fotos°°° JODY MACDONALD There’s an epic quality about the suitably named Best Odyssey. There’s something surreal, not to say anachronistic about it too. As the pace of modern life quickens, slipping your moorings for an adventure lasting nearly five years seems like some kind of sweet utopia. Except that is, if you’re the crew of the Discovery. Between January 2007 and October 2011 they sailed the planet’s turquoise seas on their catamaran measuring nearly 18 metres, journeying from the Marshall Islands to Micronesia, from Tonga to

i Paraglider Gavin McClurg flies over the sand dune while enjoying the spectacular view s Flying above The Bazaruto Archipelago looking down at the shifting sands and a local fishing boat sailing by.

the Andaman Islands, and from Polynesia to the shores of Mozambique. Carefully selected for their dreamily remote and often virgin locations, and their magical beaches lapped by crystal-clear waters and flanked by multi-coloured reefs and vast, majestically sculpted wave-like dunes, these earthly paradises provided a tailor-made backdrop for the board and water sports experts who made their way on to the boat’s deck. ULYSSES’ HAPPY DISCIPLES Don’t go thinking this is some kind of Hollywood production though, trampling everything in its path. The Best Odyssey’s participants took great pride in preserving these stunning locations and respecting the local communities they met along the way. “In Tonga we came across a little island where the community was made up entirely of children,” explained the Verbier-based paraglider pilot Mike Belbas (see inset). “The adults had set out to sea, fishing for several weeks. We spent some time with the community and showed them photos and videos of the places we’d been to.” The emotions felt were nothing but genuine, the pleasure palpable. Their photos and videos reflect that, telling the story of how an expedition underpinned by human and sporting values unfolded. These wayfarers are not Ulysses. They haven’t emerged from a Greek epic playing out before our very eyes. They are athletes who make for memorable images not because they’re playing their sports but because they’re living out an incredible odyssey. Though champions in their respective fields, they are, more than anything else, enthusiasts caught up in the moment and the unique circumstances of their coming together. www.offshoreodysseys.com

VERBIER TWINS SAIL THE SEAS The founders of a paragliding school in Verbier, twins Stu and Mike Belbas were regular voyagers on the Best Odyssey expedition. Mike tells us about his amazing experiences.

o Paragliding instructors in Verbier, Mike (in the green jacket) and Stu were frequent travellers on The Best Odyssey. i Pilot and Captain of The Best Odyssey, Gavin McClurg exploring the dune by paraglider. f The catamaran «Discovery» explores the reefs edge. s Pilot Stu Belbas flies over the turquoise waters of Tonga.

How did you find your way on to the Discovery? I met the girlfriend of the founder when I was skippering a boat in the Caribbean a few years back. She was a client of mine and she let me know when the adventure got under way. And that was that. How often did you get on board? Quite a bit. Apart from the first year in the Caribbean, we joined the crew twice a year for five to six weeks at a time, in the spring and autumn, when we weren’t working at Verbier. Our sponsors, Kaenon sunglasses, stumped up our expenses in exchange for promo photos. You and your brother were the first people to paraglide over Tonga, the Andaman Islands, the southern atolls of the Maldives and Mozambique. You also paid a trip to Madagascar. Which place made the biggest impact on you? I’d say the Maldives. It was truly magical, with the most beautiful surf and kitesurf waves we found along the way. We saw a lot of sea life every day there too, like manta rays and dolphins. Any more unforgettable memories? We tracked a pod of whales off the Azores for three hours and then we swam with them. Just amazing.

Epic adventure on an epic odyssey around the world by sail in five years.

Epic adventure on an epic odyssey around the world by sail in five years.