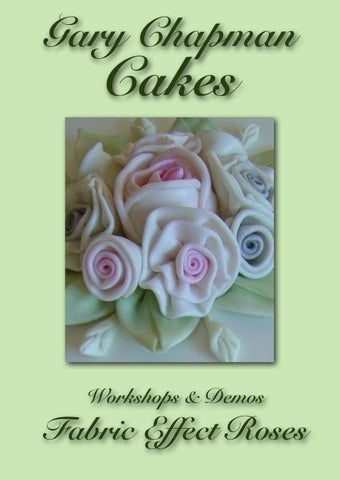 The course will include how to make a range of fabric effects roses (simple rolled, pleated, petalled and cabochon) along with a range of leaves and buds

Workshop Fabric Effect Roses Requirements Overview • The aim is to complete a range of fabric roses, buds and leaves. • A cake or covered dummy is not required. • It is best to use flowerpaste to make the flowers although some mixes of flowerpaste and sugarpaste can work. We will see what happens on the day. • I will provide a range of pre-prepared and dried flower centres (although we will make them too). Requirements • Small paintbrush for glue • White flora in a small container (I use the very small glass jam jars) • Sugar glue (melted sugarpaste / I zap with a little water in the microwave) in container (I use the very small glass jam jars) • Dusting powder in bags (I tend to use icing sugar in linen) • Paintbrushes mainly to glue • Rolling pin (medium) • Small rolling pin • Set of circular cutters – small to large • Flower paste (at least 250g) • Sugarpaste (just in case @ 150g – I am really liking Renshaw’s • Knife or cutting tool (I use one from PME) • Paste colours • Formers or foam shape or circles of kitchen towel / paper • Kitchen towel / paper or tissue • Box for examples • Small dummy or florist block to place flowers on cocktail sticks • Some small plastic bags (just incase) • Sturdy rolling board • Small scissors • Nimble fingers • Box for flowers • Cocktail sticks – preferably ones with thicker ribbed top (I will bring extras just in case) Points • Colour scheme for the flowers - just use white and then dust in delicate shades OR colour the paste. • If colouring paste I suggest two main colours and sometimes it is good to choose a light and dark for contrast such as pink and lilac, orange and yellow, light and dark pink. • You will also need some green paste for leaves. • Colour up flowerpaste beforehand to save time. Suggested division : light (100g ), dark (100g ) and green (50g). • It is wise to have an extra supply of flowerpaste just in case you need more and use appropriate paste colours too. • Flowerpaste must be stretchy and elastic – I use Satin Ice and Wilton gumpaste (I would avoid Renshaw’s and Squire’s Kitchen as they are too brittle). There may be a local brand that is good so do let me know. • You will need a box and tissue / kitchen roll as packing to take your flowers home with you Any questions beforehand email gazchappers@btinternet.com

Gary Chapman biography Gary Chapman has influenced many cake decorators and is a true cake designer with his own very distinct style. Gary was the originator of the modern technique of fabric effects and gave demonstrations and classes all over the UK and the USA to share his skills. He has also published books and magazines and gas been a contributor to various global cake magazines. Gary first developed an interest in sugarcraft in the early 1990s when he worked for Merehurst, who at the time had built up a worldwide reputation as the leading publisher of cake decorating books. Invigorated by this exciting edible art medium he invented the new technique of fabric effects in sugar, published his own book (available now as Fabric Effects in Sugar: First Steps and Basic Skills) and gave demonstrations and classes all over the UK and the USA. Later he launched and was Editor of the first ever mass-market cake decorating magazine. He produced Iced and Easy, a beginners cake book for WH Smith and provided display pieces for exhibitions of edible art called â&#x20AC;&#x2DC;A Taste of Artâ&#x20AC;&#x2122;. He was one of the top 10 wedding cake makers in London. Gary Chapman Cakes on Facebook Gary Chapman cakes Gary Chapman Jazz Age Club Eddittpublishing.com

More recently, he left London for a quieter life in the Cotswolds but continues to teach and experiment.He has done an online class called Rolled Fondant Flowers for Craftsy.com based on his book Classic Fabric Flowers in Sugar.

Fabric Effects in Sugar First Steps and Basic Skills Fabric Effects in Sugar Book One introduced the idea of emulating fabric effects in sugar when it was first published in 1993 and started a huge trend in cake decorating that continues unabated today. This landmark book in cake decorating has been out of print for many years and this is a new, revised edition. Learn how to produce a range of basic fabric effects such as the drape, hangings or tails, bows, rosettes, ribbon cockade, borders and several varieties of flowers and leaves, including a fabric effect rose.

Classic Fabric Flowers in Sugar Classic Fabric Flowers in Sugar is solely focused on how to make a range of simple fabric effect flowers and a range of leaves. All of these flowers offer a simple alternative to making the usual sugar flowers, which often take a long time to construct. These techniques are usually quicker but equally attractive. The flowers featuredin this step-by-step book include: the rolled rose, the pleated rose, a hybrid half rolled and half pleated rose, cabachon roses, simple blossom, textured and double sided blossom, patterned paste blossom, rosette flowers, pointed petalled fantasy flower, concave flower, poinsettia, Christmas rose and mistletoe.

Some other display cakes with fabric roses

Some other display cakes from Gary Chapman 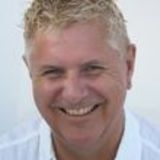 A brochure guide for my workshop or demo on how to create a range of fabric effect roses and leaves in sugar.

A brochure guide for my workshop or demo on how to create a range of fabric effect roses and leaves in sugar.