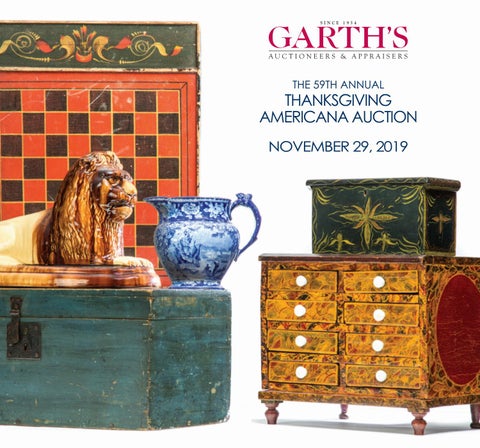 212 THREE ENGLISH BRASS CANDLESTICKS. Mid 18th-19th century. Pair of Queen Anne candlesticks with petal bases and extractor holes in sockets. 7.75”h. And a saucer base with push up and threaded post. 7.5”h. $300-600

276 INDIANA PIECED ALBUM QUILT. Seven Sisters pattern in orange and red. Hand stitched with embroidered names and “Mt. Taybor 1889”. Machine sewn binding. Names of the Mt. Taybor congregation (outside of Dillsboro, Indiana) as well as Reverends Jesse Miller, GW Colragen and EH Wood along with their wives. Handed down through the family of Jesse Miller (pastor at Mt. Taybor) and reputedly a going away gift from his congregation. Minor wear and some staining. 72” x 82”. $600-800

474 BALTIMORE INLAID HEPPLEWHITE SIDEBOARD. Late 18th-early 19th century, mahogany and mahogany veneer with poplar secondary. Serpentine front. Banded and string inlay with medallions on drawers and doors, center one having an urn and legs having bellflowers. Dovetailed drawers including decanter drawer and two compartments on the right and below with period replaced brasses. Refinished with some imperfections. 39”h. 72.25”w. 27.25”d. $2,500-4,500

GARTH’S POLICY (complete Terms &amp; Conditions at garths.com/terms--conditions) GUARANTEE: Garth’s Auctions, Inc. continues to be committed to providing thorough descriptions that reflect our belief in service through honesty, integrity and attention to detail. Garth’s Auctions, Inc. guarantees the authenticity of origin as stated in the first bold line of the catalogue description, with the exception of amendments by any oral or written notices or announcements at the time of the auction. “Origin” is defined as the creator, period, culture, or source, as set forth in the first bold line of a lot in the catalog. Exclusions – Notwithstanding any other provision of these Terms of Guarantee, Garth’s Auctions, Inc. does not guarantee the names or patterns of any Oriental rugs. All rug dimensions are approximate. Garth’s does not guarantee the authenticity of any item created before 1500. Regarding all jewelry, all weights, grades, sizes, and metal content(s) are approximate. Regarding colored stones: purchasers are reminded that colored stones and diamonds may be enhanced by using one or more techniques, including but not limited to: clarity enhancements, resins, and heat treatment. Garth’s makes no warranty express or implied to the buyer as to whether a natural stone has been enhanced. Additionally, antiques, by the very nature of their age, have wear that reflects their years of use. As a result, honest wear earned from use is to be expected and is sometimes the proof that an item is an antique. Normal wear will not be listed. Buyers who would like to know the fine points regarding condition should call prior to the auction. We would prefer that you examine the items before you place a bid. All other guarantees of authenticity of authorship, expressed or implied, are hereby disclaimed. There is no other warranty, express or implied. Each and every lot is sold “as is”. BUYING FOR OUR ACCOUNT: The owners and employees of Garth’s Auctions, Inc. never have, nor ever will buy any item at our auction for ourselves. LIABILITY: Garth’s Auctions, Inc. guarantees the authenticity of origin of a lot for a period of twentyone days from the date of the auction and only to the original purchaser of record at the auction. If it is determined to Garth’s Auctions, Inc.’s satisfaction that the first bold line is incorrect, the sale will be rescinded provided the lot is returned to Garth’s Auctions, Inc. in the same condition in which it was at the time of the auction. It is also Garth’s Auctions, Inc.’s policy to have the purchaser obtain, at the purchaser’s expense, the opinion of one (or two in some cases) recognized experts in the field, mutually acceptable to Garth’s Auctions, Inc. and the purchaser, before Garth’s Auctions, Inc. determines whether to rescind the sale under the above guarantee. The purchaser’s sole remedy in the event of disputed authenticity of origin of any lot shall be the rescission of the sale and return of the original purchase price and premium paid by the purchaser. Garth’s Auctions, Inc. accepts no liability of any kind for an item after the gavel has fallen. WITHDRAWN LOTS: Garth’s Auction, Inc. reserves the right to withdraw any property before the auction and shall have no liability whatsoever for withdrawal of the property. SUCCESSFUL BIDDERS: The highest bidder acknowledged by the auctioneer is the buyer. The auctioneer is the sole determinant as to who is the successful bidder. Once the auctioneer’s gavel falls, the successful bidder immediately assumes full risk and responsibility for the purchased lot. DISPUTED AND REJECTED BIDS: The auctioneer reserves the right to re-open the bidding on the disputed lot. The auctioneer also reserves the right to reject nominal bids and to withdraw from the auction items that do not receive a bid reflective of an item’s worth. We make every attempt, for the benefit of both seller and buyer, to create lots that reflect the quality of our cataloged merchandise. Therefore, any lot not receiving an opening bid of at least $50.00 will be passed.

ESTIMATES &amp; RESERVES: Presale estimates are intended as guides and may not be reflective of actual gavel price. Some of the items in this auction are subject to a reserve. The reserve is a confidential minimum price agreed upon by the consignor and Garth’s Auctions, Inc. The reserve will not be higher than the low estimate. DEFINITIONS OF STATEMENTS: a) “Attributed to” – work is of the period of the named artist and may be the work of that artist, but not definitely so. b) “Circle of” – work of the period closely associated with the artist or from his studio. c) “School of” – work by a pupil or follower of the artist, in his style. d) “After” – in our opinion, a copy of the work of the artist. e) “Signed” – has a signature that in our opinion is the signature of the artist. f) “Bears signature” – has signature that in our opinion might be the signature of the artist. CONDITION REPORTS: Absentee bidders should call for an updated condition report. This report supersedes the catalog description. Our staff will take a list of the items you would like examined and give you a time to call back for a detailed report. Photographs are also available for a nominal fee. ABSENTEE BIDS: Garth’s Auctions, Inc. accepts absentee bids including internet bids. These bids are given to an experienced bidder to execute competitively. All absentee items are purchased as inexpensively as possible. Although our absentee bidding system is 100% honest, it is not foolproof and Garth’s Auctions, Inc. is not responsible for failing to execute any absentee bids. A $50.00 minimum bid is required on all lots. Absentee bids must be submitted in (a minimum of) $5.00 increments. Increments less than $5.00 will not be observed. Garth’s Auctions, Inc. also accepts telephone and live auction internet bids. For phone bidding it is to your advantage and we strongly recommend placing a “back up bid”. BIDDING INCREMENTS Absentee and saleroom bidders should to which our auctioneers adhere: $0-500 $500-1,000 $1,000-3,000 $3,000-5,000 $5,000-10,000 $10,000-30,000 $30,000-50,000

I have examined these items.

Garth’s may, on my behalf, enter bids on the following lots to the maximum price I have indicated for each lot. I understand that if my bid is successful, the purchase price will be the sum of my final bid plus a premium (see policy) of the bid and an applicable sales tax. Garth’s will execute these bids competitively and make all reasonable attempts to purchase items as inexpensively as possible. Garth’s absentee bidding system is 100% honest but is not foolproof. Absentee bidders are subject to the complete Terms and Conditions as outlined in Garth’s policy in the catalog and/or on the website. LOT NUMBER

To allow us to process your bids, bidders not yet known to Garth’s should supply the following information at least 3 days prior to the auction. We thank you!

Name (as appears on card): Billing Address: City: Your Signature:

(I authorize Garth’s Auctions to charge the full amount of my auction purchases to credit card below IF payment for purchases hasn’t been initiated within 10 days after auction.) 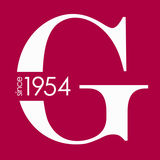