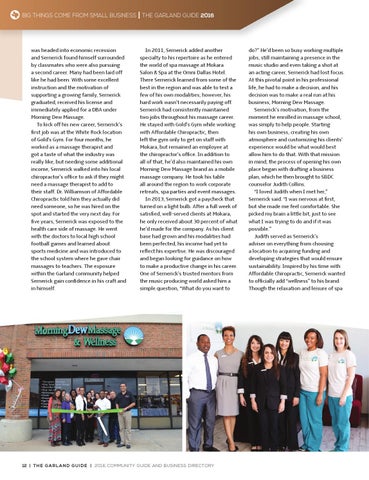 was headed into economic recession and Sernerick found himself surrounded by classmates who were also pursuing a second career. Many had been laid off like he had been. With some excellent instruction and the motivation of supporting a growing family, Sernerick graduated, received his license and immediately applied for a DBA under Morning Dew Massage. To kick off his new career, Sernerick’s first job was at the White Rock location of Gold’s Gym. For four months, he worked as a massage therapist and got a taste of what the industry was really like, but needing some additional income, Sernerick walked into his local chiropractor’s office to ask if they might need a massage therapist to add to their staff. Dr. Williamson of Affordable Chiropractic told him they actually did need someone, so he was hired on the spot and started the very next day. For five years, Sernerick was exposed to the health care side of massage. He went with the doctors to local high school football games and learned about sports medicine and was introduced to the school system where he gave chair massages to teachers. The exposure within the Garland community helped Sernerick gain confidence in his craft and in himself.

In 2011, Sernerick added another specialty to his repertoire as he entered the world of spa massage at Mokara Salon &amp; Spa at the Omni Dallas Hotel. There Sernerick learned from some of the best in the region and was able to test a few of his own modalities; however, his hard work wasn’t necessarily paying off. Sernerick had consistently maintained two jobs throughout his massage career. He stayed with Gold’s Gym while working with Affordable Chiropractic, then left the gym only to get on staff with Mokara, but remained an employee at the chiropractor’s office. In addition to all of that, he’d also maintained his own Morning Dew Massage brand as a mobile massage company. He took his table all around the region to work corporate retreats, spa parties and event massages. In 2013, Sernerick got a paycheck that turned on a light bulb. After a full week of satisfied, well-served clients at Mokara, he only received about 30 percent of what he’d made for the company. As his client base had grown and his modalities had been perfected, his income had yet to reflect his expertise. He was discouraged and began looking for guidance on how to make a productive change in his career. One of Sernerick’s trusted mentors from the music producing world asked him a simple question, “What do you want to

do?” He’d been so busy working multiple jobs, still maintaining a presence in the music studio and even taking a shot at an acting career, Sernerick had lost focus. At this pivotal point in his professional life, he had to make a decision, and his decision was to make a real run at his business, Morning Dew Massage. Sernerick’s motivation, from the moment he enrolled in massage school, was simply to help people. Starting his own business, creating his own atmosphere and customizing his clients’ experience would be what would best allow him to do that. With that mission in mind, the process of opening his own place began with drafting a business plan, which he then brought to SBDC counselor Judith Collins. “I loved Judith when I met her,” Sernerick said. “I was nervous at first, but she made me feel comfortable. She picked my brain a little bit, just to see what I was trying to do and if it was possible.” Judith served as Sernerick’s adviser on everything from choosing a location to acquiring funding and developing strategies that would ensure sustainability. Inspired by his time with Affordable Chiropractic, Sernerick wanted to officially add “wellness” to his brand. Though the relaxation and leisure of spa

The Garland Guide is one of the Chamber’s most highly-requested publications. Full of feature articles highlighting local success stories and insider information about the community that can't be found anywhere else, the Guide is a valued resource. 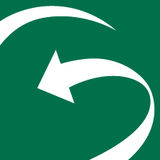