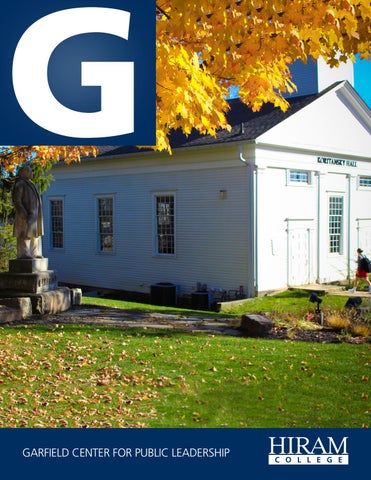 reetings to all the friends and supporters of the Garfield Center for Public Leadership! We had a very strong year in 2015-2016 with regard to GCPL programming, and we want to give you a quick report about that. We also want to provide you with a preview of some of our programming plans for this coming academic year.

This was a standout year with regard to our seminars. Our fall seminar focused on the ongoing, multifaceted conflict in the Middle East, and featured two guest speakers from the RAND Corporation: Dalia Dassa Kaye, RAND’s Director of the Center for Middle East Public Policy, and Andrew Liepman, a senior RAND policy analyst. The spring seminar focused on the issue of national debt, for which our guest speaker was former U.S. Treasury Secretary and former Alcoa executive Paul O’Neill. Both events were very well attended; our fall seminar, for instance, had approximately 250 people. And our guest speakers did a great job of engaging the audience; indeed, the post-dinner Q-and-A with Mr. O’Neill was the most dynamic that we’ve ever seen. We greatly appreciate the generous support of donors to the GCPL who have played a central role in allowing us to bring this seminar programming to the Hiram community. We likewise ran two crisis simulations this year: one for the Garfield Scholars, and one in the summertime for high school students. These events were led – as they always are – by former naval officer Don Wurzel, along with a group of other retired military personnel and individuals from the world of finance. For the high school program, our original number of enrollees reached 30, but, due to a variety of reasons (including having two students waylaid by the Cavaliers’ parade in downtown Cleveland!) we wound up with 26 students who ultimately participated. This was four more students than last year, and nearly double what we had the first year we ran this camp. These students came from a variety of schools, including seven from Streetsboro High School, three from the Hershey Montessori Farm School, one from Western Reserve Academy, one from Chicago, two from Pittsburgh, several from the Canton area, etc. I’m particularly pleased to report the following: one of these students was an attendee at our original camp back in the summer of 2014, he then attended a crisis simulation program at Georgetown in the summer of 2015, then he returned to us this summer, with the report that our program is far superior to what he experienced at Georgetown. As for programming for this coming year: We are excited to announce that the topic of our fall seminar will be “Obamacare After Obama,” for which we have invited Scott Lammie, Chief Financial Officer and Senior Vice President at the University of Pittsburgh Medical Center, to assess the effects thus far, and the likely foreseeable developments, of the Affordable Healthcare Act. In the spring, our seminar topic will be “The Crisis in the South China Sea.” That region appears to be the next major flashpoint in global politics, and thus we’ll be bringing speakers to campus in order to help us think clearly and comprehensively about that developing situation. As always, we look forward to seeing you at our upcoming events, and we sincerely appreciate your continued support of our program, which we believe is vital to the intellectual life of our students and the college as a whole.

G ABOUT THE GARFIELD CENTER FOR PUBLIC LEADERSHIP

Hiram College is one of four schools to have its president serve as commander-in-chief of the United States of America. James A. Garfield was both a student and president of Hiram College before leading troops in the Civil War and beginning his political career. To keep this history alive, Hiram College created the Garfield Center for Public Leadership to exemplify Garfield’s dedication to public service. Since its inception, the Center has been working with numerous scholars and the community at large to improve political efficacy and plant the seeds of public service.

LOOK FOR MORE INFORMATION ON THESE AND OTHER UPCOMING SEMINARS

SPRING SEMINAR “The Crisis in the South China Sea”