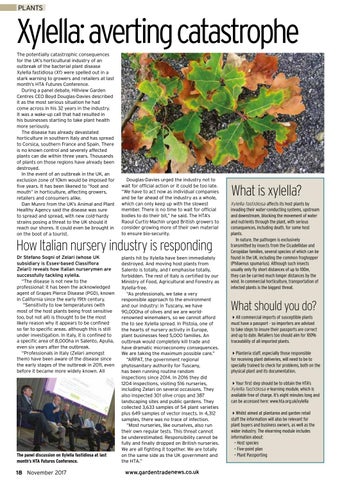 Xylella: averting catastrophe The potentially catastrophic consequences for the UK’s horticultural industry of an outbreak of the bacterial plant disease Xylella fastidiosa (Xf) were spelled out in a stark warning to growers and retailers at last month’s HTA Futures Conference. During a panel debate, Hillview Garden Centres CEO Boyd Douglas-Davies described it as the most serious situation he had come across in his 32 years in the industry. It was a wake-up call that had resulted in his businesses starting to take plant health more seriously. The disease has already devastated horticulture in southern Italy and has spread to Corsica, southern France and Spain. There is no known control and severely affected plants can die within three years. Thousands of plants on those regions have already been destroyed. In the event of an outbreak in the UK, an exclusion zone of 10km would be imposed for five years. It has been likened to “foot and mouth” in horticulture, affecting growers, retailers and consumers alike. Dan Munro from the UK’s Animal and Plant Healthy Agency said the disease was sure to spread and spread, with new cold-hardy strains posing a threat to the UK should it reach our shores. It could even be brought in on the boot of a tourist.

Douglas-Davies urged the industry not to wait for official action or it could be too late. “We have to act now as individual companies and be far ahead of the industry as a whole, which can only keep up with the slowest member. There is no time to wait for official bodies to do their bit,” he said. The HTA’s Raoul Curtis-Machin urged British growers to consider growing more of their own material to ensure bio-security.

How Italian nursery industry is responding Dr Stefano Sogni of Zelari (whose UK subsidiary is Essex-based Classiflora Zelari) reveals how Italian nurserymen are successfully tackling xylella. “The disease is not new to the professional: it has been the acknowledged agent of Grapes Pierce Disease (PGD), known in California since the early 19th century. “Sensitivity to low temperatures (with most of the host plants being frost sensitive too, but not all) is thought to be the most likely reason why it appears to be confined so far to specific areas. although this is still under investigation. In Italy, it is confined to a specific area of 8,000ha in Salento, Apulia, even six years after the outbreak. “Professionals in Italy (Zelari amongst them) have been aware of the disease since the early stages of the outbreak in 2011, even before it became more widely known. All

plants hit by Xylella have been immediately destroyed. And moving host plants from Salento is totally, and I emphasise totally, forbidden. The rest of Italy is certified by our Ministry of Food, Agricultural and Forestry as Xylella-free. “As professionals, we take a very responsible approach to the environment and our industry: in Tuscany, we have 90,000ha of olives and we are worldrenowned winemakers, so we cannot afford the to see Xylella spread. In Pistoia, one of the hearts of nursery activity in Europe, plant businesses feed 5,000 families. An outbreak would completely kill trade and have dramatic microeconomy consequences. We are taking the maximum possible care.” “ARPAT, the government regional phytosanitary authority for Tuscany, has been running routine random inspections since 2014. In 2016 they did 1204 inspections, visiting 516 nurseries, including Zelari on several occasions. They also inspected 301 olive crops and 387 landscaping sites and public gardens. They collected 3,633 samples of 54 plant varieties plus 649 samples of vector insects. In 4,312 samples, there was no trace of infection. “Most nurseries, like ourselves, also run their own regular tests. This threat cannot be underestimated. Responsibility cannot be fully and finally dropped on British nurseries. We are all fighting it together. We are totally on the same side as the UK government and the HTA.”

What is xylella? Xylella fastidiosa affects its host plants by invading their water-conducting systems, upstream and downstream, blocking the movement of water and nutrients through the plant, with serious consequences, including death, for some host plants. In nature, the pathogen is exclusively transmitted by insects from the Cicadellidae and Ceropidae families, several species of which can be found in the UK, including the common froghopper (Philaenus spumarius). Although such insects usually only fly short distances of up to 100m, they can be carried much longer distances by the wind. In commercial horticulture, transportation of infected plants is the biggest threat.

What should you do? 4All commercial imports of susceptible plants must have a passport - so importers are advised to take steps to insure their passports are correct and up to date. Retailers too should aim for 100% traceability of all imported plants. 4Planteria staff, especially those responsible for receiving plant deliveries, will need to be to specially trained to check for problems, both on the physical plant and its documentation. 4Your first step should be to obtain the HTA’s Xylella fastidiosa e-learning module, which is available free of charge. It’s eight minutes long and can be accessed here: www.hta.org.uk/xylella 4Whilst aimed at plantarea and garden retail staff the information will also be relevant for plant buyers and business owners, as well as the wider industry. The elearning module includes information about: • Host species • Five-point plan • Plant Passporting